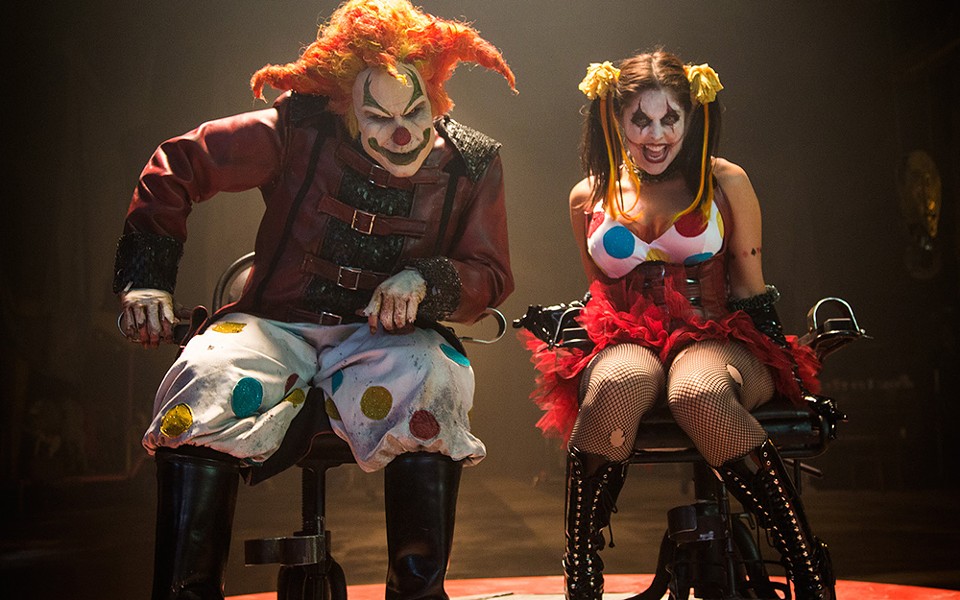 Orlando's parks are packed with world-famous characters, but it's a cruel irony that the actors portraying those princesses and superheroes remain mostly anonymous. Disney performers are famously forced to say they are "friends with Mickey," rather than admit they spend their days inside a giant mouse head. So it's worth noting when an event like the Entertainment Designers Forum allows the artists who embody a couple of theme-park icons to step out from behind their makeup and talk about their creepy characters.

Artist Kim Gromoll founded the EDF with the late Stephanie Girard, and has kept it going through last weekend's seventh edition in her honor. The Orlando Rep's Edyth Bush Theatre once again hosted two well-attended discussions featuring a who's who of theme park creators and creatives, combined with a silent auction of attraction artwork and artifacts, many actually used inside area parks. The first session was a wide-ranging round-table moderated by model-maker Ray Keim with representatives from the big three resorts; the second focused on an in-depth deconstruction of the design process behind "The Skoolhouse," a fan-favorite scarezone from 2008's Halloween Horror Nights.

Though the night's lineup included industry heavyweights like SeaWorld VP Brian Morrow and Disney writer-director J. Michael Roddy, the evening's biggest draws were two people whose faces you won't recognize from news reports and theme park documentaries. Joining the executives and Imagineers on the opening panel were actors James Keaton and Erin Nicole Cline, best known to the bloodthirsty fans of Universal's HHN as Jack the Clown and Chance.

I first met Keaton, who is about to reach his 20th anniversary at Universal Orlando, when we both worked in USF's entertainment department during the late 1990s. Back then, he played everyone from Beetlejuice and Doc Brown to the Grinch, and was frequently featured in the annual Bill & Ted show. Keaton was tapped to play Jack Schmitt back when Universal's most popular haunt icon was first created in 2000, and returned to the role for his 2015 resurrection.

Keaton's career as the homicidal clown nearly ended the character's official debut, as he was chased out of TV stations while trying to deliver media invitations; when asked for ID by the cops he quipped, "I left it in my other clown pants." The character has evolved since those early days, partially driven by dental appliances: "My voice started off originally as Joker doing Jack Palance ... lots of heavy breath. The teeth at the time were these hard acrylics, and I had to slurp to swallow. So all of that became part of the character."

The mouth prosthetics have improved over the years, but Jack's original saliva-inspired sound hasn't totally disappeared. "It's become more my voice in a way, I just kind of pitch it in a certain place. I still do the breath sometimes because I'm trying to think of what I'm going to say. It's my [breathy slurp] ... 'what am I going to say without getting fired?'"

Cline came to Orlando from England in 2007 knowing "nothing about performing at theme parks," and was picked from an open audition by Roddy to play Jack's comely companion Chance. The character was clearly influenced by Batman's Harley Quinn, but Cline said she was unaware of the comparison at first: "It's blasphemous now, but at the time I had no idea who Harley Quinn was. I was watching a lot of Rob Zombie films, so my Chance drew inspiration from Baby Firefly in House of 1000 Corpses."

Cline was originally slated to lip-sync prerecorded dialogue, but her interaction with Keaton's Jack was so strong that Roddy upgraded her to a live microphone. "I didn't realize how cool that was, and that it cost more money. He really was birthing something cool for me, because that role gave me so many other opportunities." She was happy to return to the role in 2015, especially since the character was reimagined as Jack's equal: "In '07 she was a pupil, she was learning, and she was very doll-like. ... Now she's carved the makeup into her face, she's truly dove in the deep end and succumbed."

Between sessions, attendees bid on auction items and drank beers while makeup designer Michael Burnett and illustrator Lon Smart demonstrated their arts. But the biggest crowd was for autographs from Keaton and Cline, with a long line of fans donating $10 to meet the pair. In the end, ticket sales and bids raised more than $15,500 for the American Cancer Society Relay for Life, a record-setting amount for the EDF. But you can't put a price on seeing unsung artists get superstar treatment.