How to steal an election 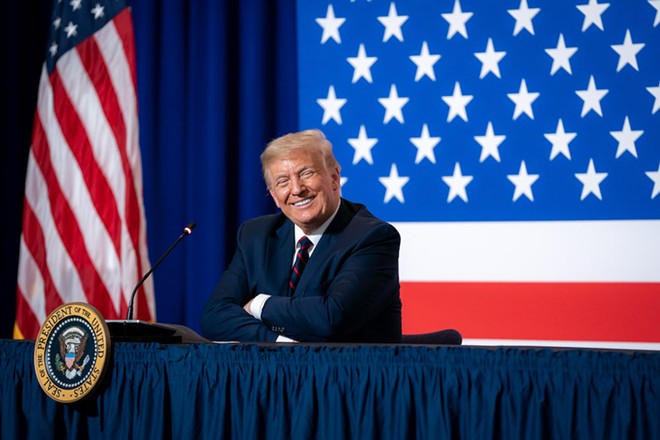 There are four plausible interpretations of Donald Trump’s suggestion that we delay the November election over the supposed threat of mail-in voting fraud.

1) He’s an idiot who impulsively farts out whatever thought enters his brain.

3) He was trying to distract from the abysmal economic data that had just been released.

4) He wants to delegitimize an election he’s likely to lose.

These are nonexclusive, of course, and each probably has some degree of merit. But the last is by far the most important, and the most dangerous. Trump is hardly a Machiavellian tactician, but if the stars align just right, such a pernicious effort could not just cause a Bush-Gore redux but create a constitutional crisis unlike anything the country has seen since 1876.

Indeed, Trump’s attacks on the election’s integrity, combined with the moral rot that has seized his party, could even present a path for the president to cling to power despite being defeated in November.

Certainly, this isn’t the most likely scenario. But it’s not impossible, either. The stage is being set, and if you put it past Trump and his cronies to try, you haven’t been paying attention.

Voting by mail only became controversial during the pandemic, as voting-rights advocates sought its expansion as an alternative to forcing people to stand in long, COVID-friendly lines on Election Day. (See Wisconsin, 2020.) But Republicans have countered that more absentee voting will hurt their chances by, well, increasing turnout, which, as Georgia’s House speaker explained, “will be extremely devastating to Republicans and conservatives.” (Seriously.)

There’s no evidence this assumption is correct, by the way, but it’s become an article of faith nonetheless. And the more Trump inveighs against voting by mail, the more it turns into a self-fulfilling prophecy. A poll last week from Emerson College showed that, among those who plan to vote in person, Trump is winning 65–32. Among those who plan to vote by mail, however, Joe Biden is up 76–20.

There’s another, more insidious self-fulfilling prophecy at work, too. While Trump insists that voting by mail will be disastrous, his postmaster general is making sure that happens. “Cost-saving” measures initiated by Louis DeJoy, the Trump megadonor who now leads the U.S. Postal Service, have led to a massive slowdown in mail delivery that could have huge ramifications for the election.

In 34 states – including most swing states – ballots not received by Election Day are discarded. In the other 16, ballots postmarked on or before Election Day can be received later, though many states leave little room for error. Texas, for instance, requires ballots to come in by 5 p.m. the day after the election. So if the mail gets backed up in early November, hundreds of thousands or even millions of voters could have their ballots invalidated, tipping crucial states into Trump’s column.

Of course, Biden’s camp would sue; chances are, a federal court would order the ballots counted.

Here’s another wrinkle. Because many states are unaccustomed to processing a deluge of mail-in ballots quickly, if there’s anything short of a blowout, we’ll probably go to bed on Nov. 3 without knowing who won. Trump might look like he’s pulled off another shocking upset – until the count of absentee ballots pushes Biden over the top days or even a week or two later.

What follows would make the Brooks Brothers riot of 2000 look like a day at the beach.

Trump, his supporters and media allies would claim fraud. He’d sue to get mail-in ballots thrown out and block states from certifying electors. William Barr’s Department of Justice would announce a transparently bogus “investigation” intended to support the boss’s baseless allegations. Protests and counterprotests would rage, giving Trump an excuse to deploy his paramilitary goons.

By law, Congress has to accept electors properly certified by states before the so-called safe harbor date in mid-December, though (theoretically) not necessarily after. But states can’t certify their electors so long as legal battles persist. Indeed, the Supreme Court blocked Florida’s manual recount in 2000 by (dubiously) arguing that it would extend beyond the safe-harbor date and thus possibly disenfranchise all Florida voters.

Would an even more Republican Supreme Court foreclose Trump’s challenges this year on those same grounds?

Put another way: Will the fate of the republic hinge on a sickly 87-year-old surviving until January and John Roberts not wanting an act of anti-democratic partisanship to be the first line of his obituary?

Meanwhile, at Trump’s urging, Republican legislators in battlegrounds Biden won – say, Michigan, Pennsylvania and Wisconsin – would likely allege fraud in their states, as well, and submit dueling slates of Trump electors to Congress.

The law tasks Congress with adjudicating Electoral College disputes on Jan. 6, but it’s ambiguous on what happens if the House and Senate disagree. If some states’ electors haven’t been certified and no candidate garners a majority, the House of Representatives decides the next president, with each state’s delegation getting one vote – California’s 20 million voters getting the same representation as Wyoming’s 266,500 – an arrangement that favors Trump.

Should Biden win by seven or eight points, the hand-wringing over Trump defying the voters will probably come to naught. But if Trump refuses to concede or turn over power, and if his supporters conclude that his loss was fraudulent, we’ll find ourselves in menacingly uncharted waters. If Trump’s presidency has shown nothing else, it’s that our institutions are ill-equipped to beat back even clumsy authoritarianism.

And whatever the result, the United States will be a weaker nation when it’s over.

Get Informed Dissent delivered straight to your inbox by subscribing at billman.substack.com.