The beers tapped at Orlando's Galaxy’s Edge don’t come from a galaxy far, far away, but they aren’t locally brewed either 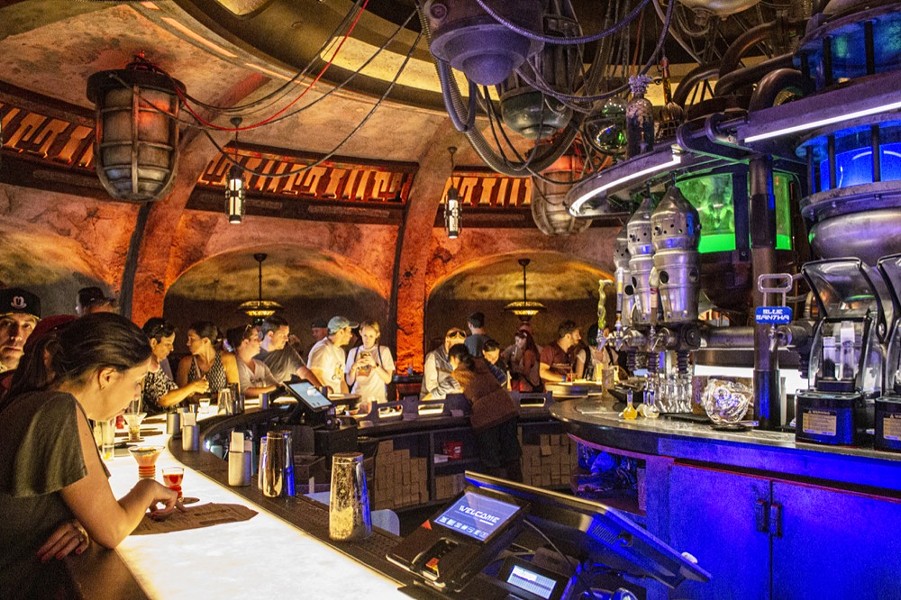 Remember that iconic Star Wars scene where the Rebellion's heroes celebrated their victory over the Empire with a six-pack of craft-brewed IPA? Yeah, we don't either. We've watched inhabitants of a galaxy far, far, away quaff blue milk and sip snake stew, but unless the upcoming Rise of Skywalker features a raging kegger in the ruins of the Death Star, we're unlikely to ever see a Jedi chugging beer onscreen.

Of course, that minor detail didn't stop Mickey from including brew taps behind the bar of Oga's Cantina when building Star Wars Galaxy's Edge at Disney's Hollywood Studios. The new Walt Disney World watering hole, like the identical Disneyland version that opened a few weeks before it, features several specialty beers with spacey names at astronomical prices.

Although the cantina's party atmosphere – which is overseen by an animatronic droid DJ who leads the crowd in Gungan drinking chants – can be out of this world, beer connoisseurs may be surprised to learn how far-flung these drafts' origins actually are. While Universal contracted with the homegrown Florida Beer Company to create three unique exclusive brews for the Wizarding World of Harry Potter, Disney sources each of Oga's drafts from a different well-known brewer:

Bad Motivator IPA is an India Pale Ale (ABV 6%, IBU 50) from Sierra Nevada Brewing Co. It's made with Galaxy and Comet hops that make it taste like a Pale Ale with tropical fruit tones. 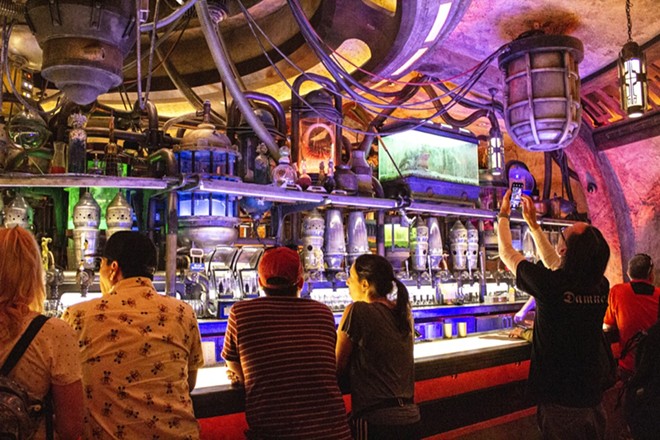 White Wampa Ale is a classic Hefeweizen (ABV 4.5%, IBU 20) wheat beer made by Ballast Point Brewing Co. Named after the snow monster that Luke disarms on Hoth, it tastes of bananas and citrus.

Gold Squadron Lager from Blue Point Brewing Co. (ABV 5%, IBU 18) has lavender and plum flavors, and pays tribute to the doomed Y-Wings in Episode IV. Note that this beer is also available outside Oga's at the Docking Bay 7 quick-service restaurant.

Gamorrean Ale from New Belgium Brewing Co. is a red ale (ABV 5.8%, IBU 42) named after Jabba's pig-like guards; it's like a Fat Tire with grapefruit and caramel.

The bad news for saga savants seeking to unlock Untappd badges is that each 16-ounce pint at Oga's will set you back $12.25 to $14.25. (If you want to sample all four beers, the $85 flight is served in 4-ounce "Rancor teeth" that you get to take home.) The worse news is that reservations for Oga's may be booked online up to 180 days in advance – with a $10-per-person penalty if you no-show – and walk-ups are only accepted sporadically, since the standing-room-only bar is usually shoulder-to-shoulder.

For serious drinking without the sci-fi shtick, make a beeline to the Baseline Taphouse near the entrance to Galaxy's Edge, where you'll find a much bigger selection of California micro-brews for significantly fewer bucks.

– This story appears in the Nov. 13, 2019, print issue of Orlando Weekly. Stay on top of Central Florida news and views with our weekly Headlines newsletter.