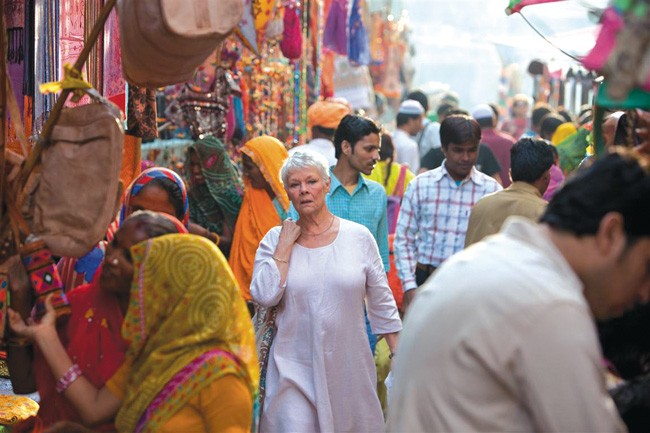 We have a saying in India: Everything will be all right in the end. So if it is not all right, it is not yet the end.” If you've seen the trailer for The Best Exotic Marigold Hotel, you've already heard that line and perhaps chuckled, especially if you've ever vacationed in India. Even so, director John Madden doesn't want you to forget it, repeating the line twice in his new film. Perhaps he did so unwittingly, as it's actually the best critique of his movie; a movie that's muddled, unfunny and contrived, yet manages to pull itself together just enough to warrant an “all right” label.

Based on the 2004 novel by Deborah Moggach, this multiple-character study cobbles together the tales of five elderly British singles and one married couple who have all, somewhat unbelievably, found their way to India, lured by the false advertisements of a supposedly magnificent extended-stay hotel “for the elderly and beautiful.” In reality, the hotel is dilapidated and barely functioning, despite the loving intentions of the manager.

Madden has proved himself a worthy weaver of cinematic tapestries featuring some of the most experienced actors in British cinema, including Judi Dench in Mrs. Brown, Anthony Hopkins in Proof, Tom Wilkinson and Helen Mirren in The Debt, and Dench and Wilkinson again, along with Geoffrey Rush and Colin Firth in Madden's masterpiece, Shakespeare in Love. Sadly, and despite predictably strong performances by Wilkinson and Dench, this project has more in common with the director's 2001 failure, Captain Corelli's Mandolin, which, like Marigold Hotel, had moments of emotional power but almost collapsed under the strain of its ambitions.

Mandolin's chief mistake was its casting. (No one really wanted to see Nicolas Cage and Penelope Cruz in a WWII love story.) At least Marigold Hotel gets that mostly right. Wilkinson steals the spotlight as the only character that comes to India with a real purpose. (We're kept in the dark about that purpose for half the film, and for good reason, as it's the best suspense the film can muster.) Most of the rest of the cast, including Maggie Smith as a sour old racist who predictably sees the error of her ways, and Bill Nighy as an unhappily married yet touchingly loyal husband, are solid. It's the script by Ol Parker and direction by Madden that struggle to bring the ensemble piece together in successful, Robert Altman-esque fashion. And although a romantic subplot involving the hotel's manager (Dev Patel of Slumdog Millionaire) adds an interesting cultural subtext, it ultimately muddies the water.

Dench's character summarizes the personal journeys each character has made with the cliché, “The only real failure is the failure to try.” By that definition, Marigold Hotel certainly succeeds, as it tries to be everything to everybody: a comedy, a drama, a touching twilight-of-life tale and even a lesson on the absurdity of racism. It just tries a bit too hard.