The best of Orlando's world-famous parks and attractions

We've all heard the conventional wisdom about our city's world-famous theme parks: nobody goes there because it's too crowded. Certainly, there are longtime Orlando residents who only venture into the parks in search of a paycheck, or when family visits from out of state.

But ignoring them would be as senseless as a New Yorker refusing to patronize Broadway, or a New Orleans native never setting foot in the French Quarter. When you've exhausted (or been exhausted by) the blockbuster resorts, be sure to explore Orlando's more modest, homegrown (often gator-centric) attractions, reminders of an era before the Mouse ate our city. 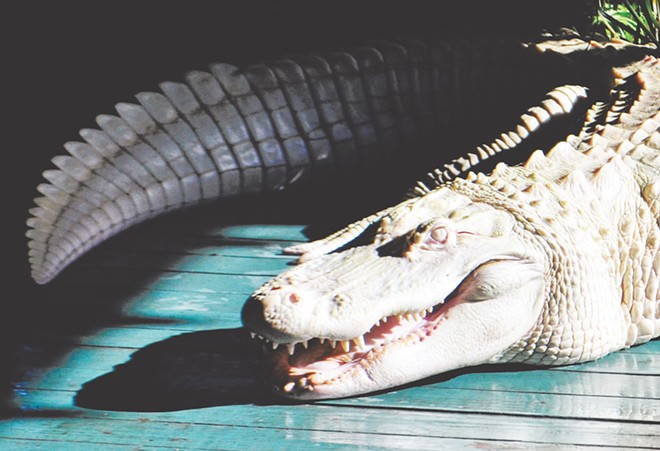 Universal Orlando Resort
6000 Universal Blvd., universalorlando.com
Orlando's No. 2 theme park destination continues to expand at a rapid rate; Islands of Adventure (home to the recent Kong ride and revamped Hulk coaster) and Universal Studios Florida (site of Jimmy Fallon's new simulator) have been joined by Volcano Bay, billed as Universal's first "water theme park." Universal's most popular attraction is the two-land Wizarding World of Harry Potter, of course, but beware: You can't ride the Hogwarts Express train between Diagon Alley and Hogsmeade without paying extra for a park-hopper pass.

Gatorland
14501 S. Orange Blossom Trail, gatorland.com
Known as the "Alligator Capital of the World," this eco-preserve is home to thousands of flesh-eating reptiles and the trainers brave enough to wrestle them. Get close (but not too close) to see them eat and sleep, or zip-line safely above their marsh. Say hi to Larry, an 800-pound resident recently relocated here from the Villages.

Legoland
1 Legoland Way, Winter Haven, legoland.com/florida
What's not to love about this 150-acre attraction whose theme is tiny blocks and miniature humans? Customize fun your way here. New in 2019 is the Lego Movie World, featuring a family-friendly flight simulator and a restaurant where every day is "Taco Tuesday."

SeaWorld Orlando
7007 Sea World Drive, 407-545-5550, seaworldparks.com
Despite animal rights controversy and declining attendance, SeaWorld still offers quality live entertainment and killer roller coasters at a lower cost than the other big resorts; their Mako coaster delivers insane seat-raising airtime, and their new Sesame Street land will tug the heartstrings of baby boomer and millennial alike. (Take note for when the Ps visit.) If you've got the dough, don't overlook the all-inclusive Discovery Cove, where you can swim with dolphins and fish, or just drink like one.

Kennedy Space Center Visitor Complex
State Road 405, east of Titusville, kennedyspacecenter.com
Take a tour of the 363-foot Saturn V that took Americans to the moon and catch the lunar particles that still dust astronaut Alan Shepard's space suit. Make it worth your while and visit when there's a live rocket launch scheduled.

The Holy Land Experience
4655 Vineland Road, holylandexperience.com
Get your money's worth, Orange County residents, and visit this taxpayer-subsidized re-creation of ancient Jerusalem, complete with an original musical and wandering Biblical characters. You could pay for admission or wait until that one day a year when they have to let you in for free.


–
This story is from the Aug. 8, 2019, print issue of Orlando Weekly's Newcomers Guide 2019. Stay on top of Central Florida news and views with our weekly Headlines newsletter.