"Realistically, when has the world not been falling apart?"

Jared Swilley of unruly garage rockers the Black Lips reflects back on the band's two decades, and the general history of humankind, with a sense of defiant optimism only achieved after a lifetime of growing up rough and living fast.

"I think we should be more grateful, but if the world was going to be falling apart, I don't want to cry about it. I want to sing as it's going down, like a captain going down with the ship."

Bassist Swilley and guitarist Cole Alexander have been steering the Black Lips through uncharted waters since they founded the band in high school two decades ago. Thinking back, Swilley takes stock: "It brings up really deep emotions. I look back and think, 'Holy shit, I can't believe I stuck with this for 21 years.'"

With unbelievably raucous live performances (including but not limited to vomiting, urination, nudity and live animals on stage), paired with a sound that's as terrifying as it is trailblazing, the Black Lips have achieved a don't-give-a-shit grit that's got the underground world hooked.

"If the world was going to be falling apart, I don't want to cry about it. I want to sing as it's going down, like a captain going down with the ship." tweet this

The band's ninth studio album and forthcoming release, The Black Lips Sing in a World That's Falling Apart, serves their legacy well, while embarking toward new sonic frontiers: The Black Lips have produced a (yes) country album. It's a natural progression for a band that always flashed a rockabilly flair, yet the band's current makeup was destined for this moment. Saxophonist Zumi Rosow, drummer Oakley Munson and country guitarist Jeff Clarke bring blazing harmonicas, slide and finger-picking, and traditional rhythms, combined with Swilley's balladeer croon and Alexander's Southern drawl. It is country music with a cosmic twist, and quintessential Black Lips.

The record release party is right here in the Sunshine State, just a couple hundred miles south in Miami. The band is launching their North American tour here in our peculiar peninsula.

"We are one of the few bands that regularly tour Florida," contends Swilley. "Florida is close to our hearts. We love all y'all, and we love coming down there." 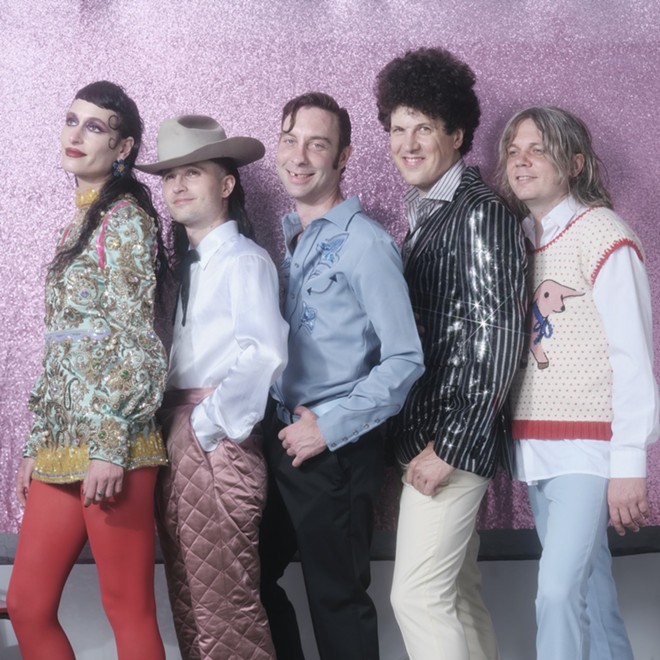 Speaking on the City Beautiful, Swilley expressed his affection for Will's Pub – where they will be DJing at a just-announced afterparty on Thursday – and of the upcoming show at the Social, provides quite the guarantee: "We're going to blow the roof off that joint."

Larger than life as they are now, it's easy to forget the band's unlikely beginnings. "It's always been me and Cole," Swilley says. "I'd get anxiety all the time. ... It's tough. It's a rocky business to be in."

If Swilley could give his younger self any advice, it would be simple, yet affirming guidance: "Hey, you got nothing to worry about, bud."

Hindsight is indeed 20/20, a fact Swilley was quick to remind us of throughout our conversation. "When I say Sing in a World That's Falling Apart, I don't mean that as a negative thing. I've always thought of it as a positive thing."

Inspired by the band's wonderfully grim album title, we asked him about the things he sees currently falling apart in the world. "From where we're sitting it's hard to say. The whole concept of humans is just trying to survive forever, and do the best we can," says Swilley.

"The whole concept of humans is just trying to survive forever, and do the best we can." tweet this

With a new year, a new record and a tour fully booked, the Black Lips are thriving. What's left to achieve for the esteemed "flower-punks"? "This band has brought me to all corners of the world," reflects Swilley. "We've met amazing people on every continent except for Antarctica, and that was only because Metallica fucked that up for us."

We can't help but press for more details on this surreal scenario.

"Well, we wanted to be the only band that played on all seven continents ... and I know for a fact that my friend Brent from Mastodon told Metallica that. They didn't actually even play in Antarctica. They played on a boat and everyone had headphones," vents Swilley.

"That's going to be my 2020 resolution. We're playing in Antarctica. I'm not going to let Versace-blimp motherfuckers like Metallica try and take my dream away."