‘The Boxtrolls’ is a hit for kids and adults alike

On the surface, it’s fun, but the subtext is pretty heavy 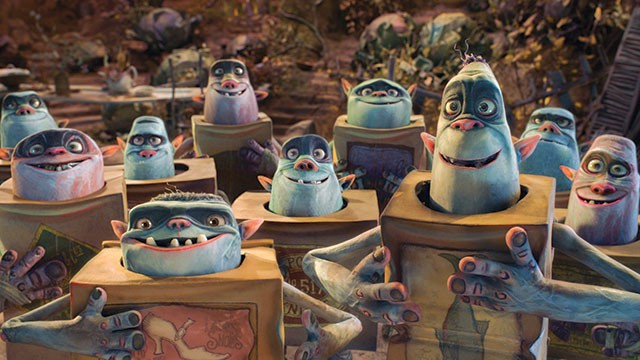 Laika animation studio has been crushing the stop-motion game since their 2009 Academy Award-nominated Coraline. They followed up with the equally impressive Paranorman, and now their latest work of wonder, The Boxtrolls, finds the studio delivering its most subversive and wildly imaginative work to date. Not only is Boxtrolls hilarious and remarkably animated, it also tackles some heavy issues like impressions of genocide and the trappings of the class system. Surprisingly grim in tone and featuring a lively cast of voice-actors, The Boxtrolls is one to delight macabre children and adults alike.

These days, most shows and films aimed at children are manufactured to be easily digested. Not so with Boxtrolls. Like the endless blocks of cheese consumed in the film, this one doesn’t go down easy. Kids are going to dig the zany characters and slapstick gags, while grownups can sink their teeth into a Dickensian tale of crotch-scratching riffraff taking on the upper crust.

Adapted from Alan Snow’s children’s book Here Be Monsters, Boxtrolls is set in the steampunk-like city of Cheesebridge. The wealthy White Hats lord over the town, tasting rare cheeses in their mansions while the peasants live in fear of the nocturnal Boxtrolls who allegedly snatch babies from their cradles and bring them to their underworld lair to be devoured. But the Boxtrolls are actually misunderstood. They are, in fact, a gentle race. Unsightly, yes, but they would rather tinker with old junk and eat bugs than bother humans. They’re kinda like chubby, hairless Fraggles who talk gibberish and wear boxes.

One time they did run off with a child (the reason is divulged later in the film) and he grew up “raised by wolves,” so to speak. Dubbed “Eggs” by the Boxtrolls, the boy thinks he’s one of them and is perfectly content living in their filthy kingdom, with its system of getaway tunnels and cardboard slides. The Boxtroll lair is like a subterranean squatter house. All they do is play music on ramshackle instruments and pig out. They’re anarchists, for sure.

Eggs (voiced by Game of Thrones’ Isaac Hempstead-Wright) undergoes self-discovery with the help of Winnie (Elle Fanning), a morbid little girl obsessed with the baby-eating image of the Boxtrolls she’s been taught. Her father, Lord Portley-Rind (Jared Harris), is the big cheese in town and couldn’t be any more disinterested in her. This parental detachment allows her to connect with Eggs and the two help one another gain knowledge about their feelings and place in the world.

Meanwhile, Archibald Snatcher (voiced vividly by Sir Ben Kingsley), a paunchy, delusional scumbag whose overly ambitious desire to become a White Hat has no limit, has made himself the chief Boxtroll exterminator. With his trio of henchman (Nick Frost, Richard Ayoade, Tracy Morgan), he circles the streets at night, swiping up Boxtrolls. As far as villains go, kids are going to laugh at Snatcher rather than be scared of him, so parents don’t have to sweat any nightmares afterwards.

The Boxtrolls’ messages of “be yourself” and “don’t butcher an entire race of creatures because they’re wicked ugly” aren’t particularly groundbreaking, but they are presented in a refreshing manner. The stop-motion animation and its storybook universe are wholly arresting. While Pixar has cornered the CGI animation market, it’s nice to see Laika carry the banner of gritty-looking old-school techniques. Watching a troll slurp down insects is way cooler this way. Let’s hope a big enough audience agrees to make The Boxtrolls a hit.