The Bridge brings plenty of swank to Winter Park, but the menu spans too wide

The latest in a line of restaurants to move into the old Diva-Nopa-Daya-La Merce-Proper & Wild space off Park Avenue in Winter Park is amusingly dubbed "A New York Restaurant." I know, try not to laugh. Its name — The Bridge — is not only meant to evoke images of the Brooklyn Bridge, but to serve as a metaphorical link between the "innovative and inspired culinary world of the Big Apple" and the presumably less innovative and inspired culinary world of Orlando.

Now, the restaurant does have enough of that clubby swank to lure in the pish-posh Park Avenue set: an eye-catching green banquette in French provincial style; velvet curtains flanking a large, gilded mirror; and a striking bar (save for the "A New York Restaurant" neon sign). If they brought on an actual bartender instead of leaving cocktail duties to inexperienced, albeit delightfully friendly and diligent, teenaged servers, the Bridge would be a dandy place to have a drink.

On one visit, I set aside my old-fashioned and dug into a "Philly" burger ($16.95), because nothing says "A New York Restaurant" like, um, a Philly burger. It's pricey, and they don't give you enough fries, but the provolone, onion and grilled pepper-laden sandwich with an Angus patty made for a perfectly fine lunch. 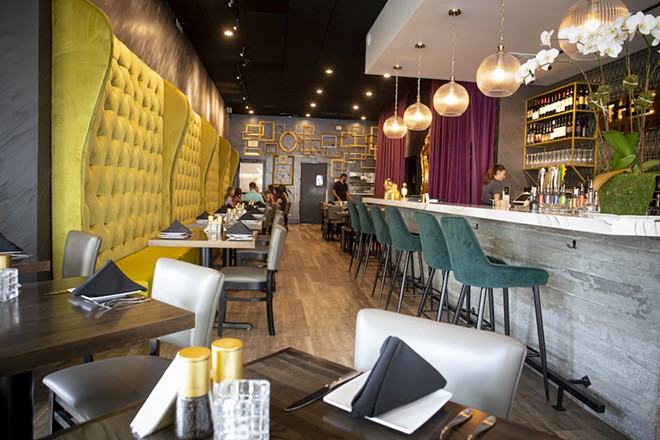 Even better was the "Bridge Special," which amounted to a $48 kebab platter, because nothing says "A New York Restaurant" like a kebab platter. Two gorgeous lamb chops, mini beef sausages and brochettes of seasoned filet mignon and chicken are served over lavash and sided with a small mound of bulgur and seasonal vegetables.

It's a very Turkish presentation, which I suppose makes sense, considering the owners are Turkish. In fact, they run an actual New York restaurant in SoHo called Pera that serves nothing but Turkish fare. A mixed review in the New York Times back in 2012 knocked Pera's brochettes and salads, but I thought they were the Bridge's strong points.

OK, so the only "Brooklyn" thing about the "Brooklyn Shepherd" salad ($9) was that it didn't own a car, but it wasn't without 'tude. A trio of unpitted Manzanilla olives lords over a hillock of diced cuke, tomatoes, onions, parsley, feta and, according to the menu, grape leaves. But my salad came with just one solitary grape leaf. It would've been nice if it had two or three grape leaves, but then again, overpromising is, like, so Brooklyn. Also worth ordering: skewers of deftly grilled jumbo shrimp ($23) served with potato wedges and seasonal veg.

There's a whole section of the menu devoted to quesadillas, and I couldn't help but wonder why. Clearly the Bridge is suffering from an identity crisis. The Mugnaini wood-fired pizza oven, a holdover from the Proper & Wild days, still sits in the kitchen. Why not fire up some pizza or, better yet, some Turkish lahmacun or pide instead of quesadillas?

Crepes are a part of the dessert offerings, though, frankly, I'd rather they weren't. The consistency of these was just too thick. And, sorry, but a crepe with Nutella, bananas and strawberry ($9.95) is NOT a "Brooklyn crepe." Kunefe would be my suggestion — the Times review said Pera's was "the best version of this classic dessert" in New York, so why not try and replicate that here? They could serve it with the Turkish tea ($3.50).

My opinion, if it isn't clear by now, is that the Bridge should drop all this "New York restaurant" nonsense and embrace its Turkish roots. So what if Bosphorus is around the corner? If the food is good and the price points aren't outrageous, Park Avenue can support both. Hell, Braccia and Rome's Flavours sit right across the street from one another, with Prato around the bend. As it stands, the Bridge will leave you feeling a lot of things, but a New York state of mind won't be one of them.