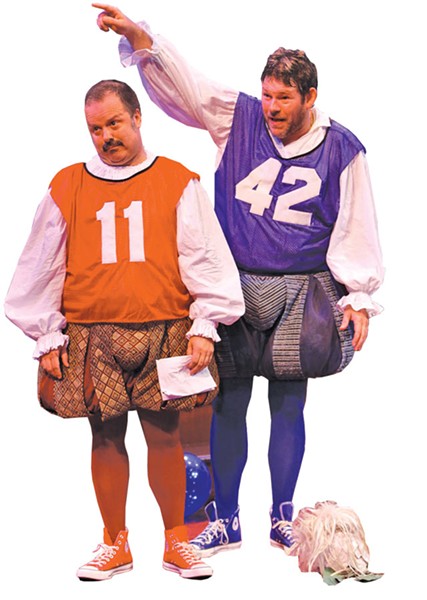 William Shakespeare wrote 38 plays: 11 tragedies, 10 histories and 17 comedies (including The Two Noble Kinsmen – the "bad" one). Watching them all, one after another, would take about 150 hours, and it's unlikely that an audience could stay awake that long. So, if you absolutely felt you had to explore each and every title in the course of one evening, suffice it to say, a little trimming would be necessary.

Enter the Reduced Shakespeare Company, formed in 1981. The troupe's original half-hour version of Hamlet, written to be performed at a California Renaissance fair, expanded over the ensuing decades into a full-fledged, two-hour-long reduction of the Bard's complete stage oeuvre. The show has been performed extensively by its original creators and their replacements, who went on to produce a veritable treasure trove of "reduced" comedies, including The Complete History of America (Abridged), The Bible: The Complete Word of God (Abridged), Completely Hollywood (Abridged) and others.

Now enter Orlando Shakespeare Theater, making its second run at this madcap compendium of Elizabethan tomfoolery. While the show's script is interpreted by the local company with fealty, there is enormous room for its creative cast – which includes company regulars Philip Nolen, Brad DePlanche and Chris Mullen – to ad-lib, throw in topical references and generally tailor the show to their individual talents while portraying dozens of Shakespearean clowns, lovers (male and female), soldiers, heroes and villains.

And director Jim Helsinger has taken advantage of each of his performers' signature abilities: DePlanche plays various Shakespearean women with a transgender abandon bordering on the psychotic; Mullen infuses his portrayal of Hamlet with his own brand of neurotic dreaminess; and Nolen's rapid shifts from overblown self-aggrandizement to childish rage to abject fear when his two compatriots leave him alone onstage to perform what is supposed to be a three-man segment is a comic wonder to behold.

Perhaps the most appealing aspect of The Complete Works … is the way it blends a deep affection for the Bard's writings with total irreverence and disrespect for the author's original intentions. To wit: The bloody and rarely performed tragedy Titus Andronicus is performed as a cooking show; Othello turns into a rap song; Macbeth is reduced to a single duel scene fought by characters who speak in completely unintelligible Scottish accents, and all the history plays devolve into a modern gridiron contest with the English crown as a fought-over and fortuitously fumbled football.

In fact, the only portion of the work which lacks the sharp wit that informs the rest of the goings-on is the reduction of all the comedies into a somewhat incoherent stick-puppet show that has the cast furiously slapping cutouts of modern pop-culture figures against a neck-high black wall. While there are some good groaners in the sketch, the relation to Shakespeare's actual plots and characters is tenuous, at best.

That cavil aside, this manic and near-maniacal production has enough laughs for longtime lovers of the Bard, as well as those who have never understood what the veneration of some old 16th-century scribe was all about.