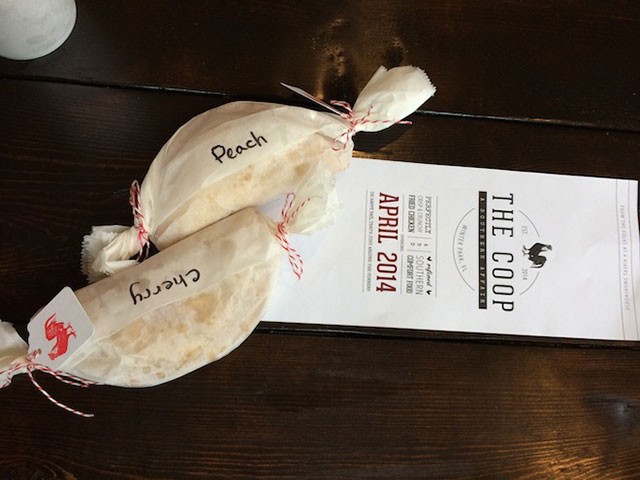 When we stopped in to sample the fare being served at the Coop: A Southern Affair, the new concept restaurant from John Rivers of 4 Rivers Smokehouse fame, we fully expected to be captivated by the fried chicken and wowed by the banana cream pie. But we totally weren’t expecting to be taken in by this unassuming little pastry. A basket of them were just sitting on the counter near the cash register, wrapped in white paper and labeled with a marker: blueberry, peach and cherry. They looked like an afterthought – the Coop’s take on an impulse buy. We put a couple on our trays. After finishing our meals (an aside: If you’re ordering sides, get the creamed corn and the mac and cheese – both are stellar), we sampled the peach. It was OK, but nothing to write home about. We put the cherry one in a bag to go, and forgot about it until later. We sampled it while watching TV later that evening – and wow, was that thing good. Eye-openingly good. Tart-sweet cherries in a beautifully flaky fried crust lightly glazed with sugar good. I don’t want to share this with you anymore because I want to eat it all myself good. If you’ve never had a hand pie, the Coop’s take is simple and unadorned – the filling is basic, letting the natural flavor of the fruit take center stage (which could be why the peach pie didn’t wow us – the peaches weren’t as sweet or complex enough to really make an impact) and the crust is so lightly fried, flaky without being crumbly and not at all greasy. A little pie sent from heaven, so deliciously simple and perfect that we’ve been thinking about it ever since.