The story of the 2002 Melbourne Cup - triumph - zzzzzz 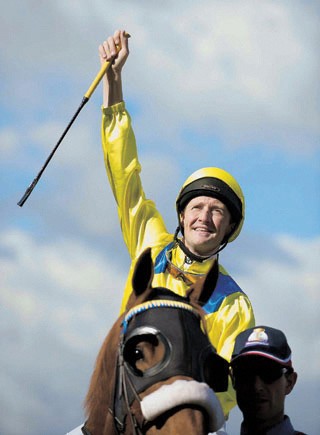 The Melbourne Cup, Australia's version of the Kentucky Derby, is known in its home country as “the race that stops a nation,” and in 2002, it stopped a nation's heart. Star jockey Damien Oliver (Stephen Curry) lost his brother, Jason (Daniel MacPherson), in a horse training accident a mere week before the Cup. It was an accident that eerily mirrored the one that claimed their father decades earlier. Damien chooses to race anyway, and, well, you know the rest.

This (over)-dramatization co-written and directed by Simon Wincer, who tackled the Cup much more successfully with 1983's Phar Lap, is an endless slog toward a relentlessly wholesome ending with almost nothing coalescing in the middle. For one thing, Curry may be the least welcome screen presence I've ever experienced. His impish form and stretchy face is like a nightmare mashup of Glee's Matthew Morrison and a Keebler elf; he has a hard time conveying anything but gee-whiz affability, even at his brother's deathbed. Brendan Gleeson shows up as the horse trainer and bellows a few lines with a half-smile, drenched in sepia tones and a score of such faux bombast that you'd think horse whispering is just another form of foreplay.

The script by Wincer and Eric O'Keefe, the author of the source novel, is about as leaden as it gets. It's hard to imagine anyone was on board for this thing for any reason but national pride.