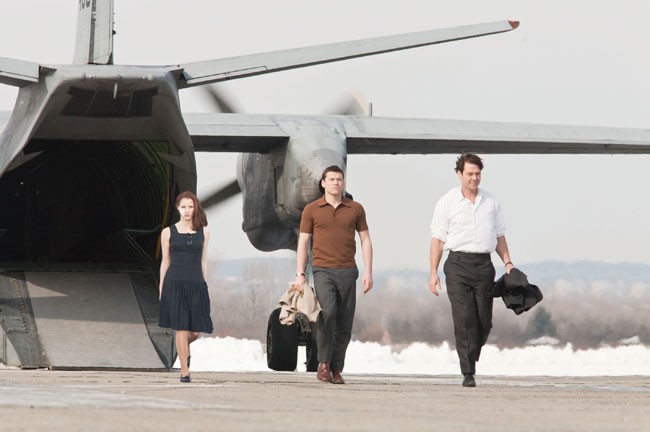 The Debt, the new thriller directed by Shakespeare in Love helmer John Madden and co-written by the scorching-hot team of Matthew Vaughn and Jane Goldman (X-Men: First Class, Kick-Ass), is an English-language remake of Assaf Bern-stein’s suspenseful yarn of the same name that played the Central Florida Jewish Film Festival a couple of years ago. The original telling was the best of the bunch back then, and the story – three Israeli Mossad agents on a mission to track down a Nazi war criminal must deal with the consequences of the assignment more than 30 years later – really stuck with me. So I was glad to see this redo and its stacked cast of solid actors. I’m ecstatic that it not only holds up to the original, but exceeds it in many ways.

On the young team, as seen in flashbacks to the 1960s, Tree of Life’s lovely Jessica Chastain takes a sharp left turn from that performance and her other great role, in the little-seen Jolene, to play Rachel Singer, a tough, fully capable agent with the most emotionally punishing job: infiltrating the gynecology practice of the former “Surgeon of Birkenauin,” Dieter Vogel (Jesper Christensen), sedating him and sneaking him off to the checkpoint. From there, the Israeli government is to cart him off and put him on trial.

But something goes wrong, as it must, and Rachel, along with co-conspirators Stephan Gold (a smoldering Marton Csokas) and David Peretz (sensitive Sam Worthing-ton), are forced to mind the despicable prisoner in a small apartment for days, feeding him, shaving him and trying not to kill him. Toward the beginning of the film, we’re privy to the events that result in the Surgeon’s escape. He vanishes from existence, and a scheme is concocted to make it appear as if the agents were successful.

Decades later, Rachel’s daughter has written a book about that mission, complete with the phony ending. (Only the original three and the Surgeon know the truth.) The team reassembles, with Helen Mirren as the jumpy, sorrowful Rachel, Tom Wilkinson as the eternal pragmatist Stephan and Ciarán Hinds as the tortured David. Around the same time as the book’s release, a man in a European nursing home claims to be the Surgeon, long assumed dead. Stephan implores Rachel to travel to the home, look him in the eyes once more, and finish the job.

This excellent premise plays out with nail-biting, intelligent precision as Madden and his team throws us in and out of the past and present, while keeping the basic groundwork solid so that the viewer never feels disoriented. This version is more mission-heavy, infused with jumps and chills only hinted at in the original. The result fleshes out a great scenario with fresh action beats, some killer acting and a wonderful interplay between the fresh-faced, complicated Chastain and a surprisingly tender, wounded Mirren. The two actresses seem to hook on to the same wavelength, despite having no scenes together (obviously), and it’s really something to marvel at.