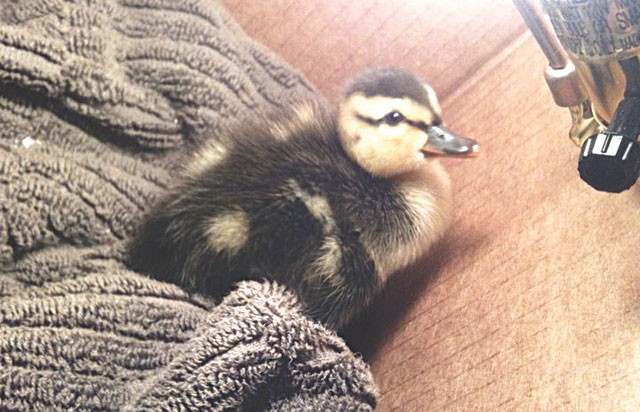 I have a confession, Orlando: I've been a pain in your ass.

I've made more dastardly mistakes and dealt more low blows to your kindest denizens than I should have, so I have a lot to atone for. Sure, I'm a 25-year-old entrepreneur with spitfire wit (and some damn good hair), but I grew up never truly understanding the concept of personal responsibility. But I digress: This story isn't about me ... it's about a duckling. The best duckling. Ever.

One hopelessly inebriated night, I was driving home in a cantankerous state. My current relationship was failing, and I had recently moved home and had to leave behind an incredible job in New York City. My life was a sham, and I would have probably considered priesthood if … ya know … the "no sex" thing wasn't a thing.

Then, all of a sudden, I saw them: DUCKS.

A mama duck and an army of ducklings were huddled in the middle of the street as cars jerkily pirouetted around them. Nobody stopped to help, and they were bound to be squashed. Not on my watch, Sally! I wasn't about to end my drunken pity party by allowing a slaughter-fest of peeping fuzzballs to take place. I swerved belligerently off-road and rounded up the little squirts, guiding them onto the closest sidewalk. The frantic mother was a little more hesitant and, upon further dizzied squinting, I understood why.

One of the babies had been hit. The mama duck wanted nothing more than to stay close and guide the little one home – even at the expense of her own life. My mother would have done the same thing (I love you, Mom). After a hopeless struggle, the injured duckling stopped moving, and I guided the mother to the rest of her little ones huddled safely on the side of the road.

As I watched them all waddle away together, I patted myself on the back.

"Ya did good, asshole." I was still a mess soaked in booze, saliva and self-loathing, but I'd saved some lives.

As I proceeded to stumble toward my car, I noticed a shivering ball of fuzz on the concrete. One of the ducklings, still in shock, refused to join the rest. Son of a bitch.

Like a regurgitated scene from those movies I don't watch, I made the Disney-riffic decision to put my open hand on the ground and make kissy noises, like I was summoning a poodle – I know, I'm an idiot. But so was the duck. The little quacker miraculously ran face-first into my palm, curled up in a squeaking ball and fell asleep.

So, for the next three weeks, I had a pet duck. After little to no thought at all, I lovingly named him "Derpy" due to his affinity for running in circles and looking up at me out of the side of his head. And … well … I just liked the name. From the moment I took him out of his luxurious cardboard-box apartment, Derpy would follow me around the house like his life depended on it (and it did). In one of the proudest moments of my life, I even taught the beaky baby to swim in my bathtub. Derpy was a rock star.

With this life in my hands, I felt unstoppable. Every social woe that I harbored – every bit of financial dread – slowly drifted away. For the first time in my life, I felt truly responsible. If I gave up on myself, Derpy died. That's all there was to it: We absolutely needed each other.

Weeks went by, and I began to understand nature's law. Derpy would grow, want to start his own family, maybe run like an idiot into his own busy lane of traffic. Despite how many times I'd laugh my ass off introducing him as "my duck in a box," Derpy deserved better than cardboard walls and the explosive thrill of watching me play Final Fantasy for 10 hours straight. Nobody deserves that.

In one of the saddest drives of my life, I took Derpy to Fallin' Pines Critter Rescue in Christmas and let him go live among his kind. I was told that he seemed to have a neurological disorder (he was Derpy after all), and was promised that all he needed was social interaction with other ducks to build up his neuro-something-something. Whatever. I'm not a duck psychiatrist. Either way, it seemed like we both needed the exact same thing in order to finally grow up. I was sad to leave.

It's been a few years since Derpy and I were a "thing" and I think about him every day. It's strange how one belligerent, drunken drive home can change your life forever. Wait. That sounds terrible, and I don't recommend it. But you never know when you might find ducks. And responsibility.