The Dirtbombs, The Perishers, Beat Circus, Curious George and more 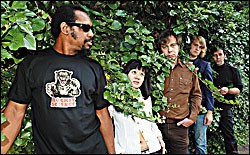 THE DIRTBOMBS If the phrase "garage rock" ever meant anything, those days are long past. Now it's used to describe everything from a certain strain of organ-driven late-'60s rock to the proto-punk roar of The Stooges and, of late, any blues-rock duo. For a band like The Dirtbombs to be tossed in amongst all that rock rabble is a plain-and-simple disservice, especially when you consider that The Dirtbombs are led by singer/guitarist Mick Collins, whose original three-piece – The Gories – was a raw, bassless slab of primal punk-blues that was as integral to the genesis of the current Detroit "sound" as The Stooges and MC5. After The Gories broke up in 1993, Collins played in a couple of different acts before The Dirtbombs emerged as his main focus. The band's unique five-piece lineup (two bassists, two drummers, Collins on guitar) can perhaps be attributed to the fact that Collins never learned how to play chords. Though in the beginning Collins cited Wire and Swell Maps as the band's principal inspirations, 2001's soul covers album, Ultraglide in Black, demonstrated Collins' adventurous/mercurial nature. With influences that run this wide – from John Lee Hooker to Captain Beefheart, The Buzzcocks to Yellow Magic Orchestra – "consistency" is not to be expected, yet The Dirtbombs can always be counted on to deliver a great rock & roll show, thanks both to the rumbling, super-sized rhythm section and Collins' energetic showmanship. He's an electric performer, whether wailing through his single-note guitar runs beneath blind-man stage shades or roaring with rich, nougaty vocals. More simply, it's great music whatever its lineage, so how 'bout we leave it at that? (with Hex Tremors; 9 p.m. at Will's Pub; 407-898-5070; $12)

THE PERISHERS Yeah, we know, we know: Nobody's gonna shell out $45 just to see a 30-minute set by an unknown opening band at a Sarah McLachlan arena show. But if you're somehow on the fence about seeing McLachlan (perhaps you've outgrown your ethereal poet-girl phase or perhaps you've just now noticed that you have a penis), allow us to suggest that The Perishers are worth making up your mind for. This Swedish quartet makes fine and beautiful music that, though unlike the headliner's, is nonetheless complementary; with a sense of subdued beauty, their atmospheric pop is as elegant as it is rustic and strong. If bands like Snow Patrol and Coldplay were capable of removing their heads from their melancholy asses for a few minutes, heading out to the front porch and smiling at the sunshine, they might end up sounding a little like The Perishers. (with Sarah McLachlan; 8 p.m. at TD Waterhouse Centre; 407-849-2020; $45-$65)

(F)IVES Having toiled in the fields of mainstream, all-ages comedy with its first two stage productions, The Jester Theater Company is doing things a little differently for its third: (F)Ives, a compendium of absurdist short plays by David Ives, is trumpeted in the group's P.R. materials with a warning that the show "contains some adult language and is not suitable for children." Hey, sign us up! Not only is the focus more mature this time out, but Jester co-founder Jay Hopkins says that his group purposely avoided incorporating any of the pieces familiar to Ives' followers from comic compilations like All in the Timing. The more obscure playlets in (F)Ives range from "Time Flies" – in which a couple of mayflies discover that their budding romance is threatened by their extremely short life spans – to "The Mystery at Twicknam Vicarage," an Agatha Christie-style poser that numbers a sofa among its dramatis personae. Vying with the furniture for applause is a five-person cast that includes Jester stalwart Jason Horne and actress/dancer/vocalist Natalie Cordone – the latter of whom was recently seen as imitation party girl "Natalie" in one of the Sentinel's shamelessly counterfeit "This is my life" Calendar ads. Now that's some absurdity for your behind. (8 p.m. at Studio Theatre; through May 22; 407-927-5043; $12, $15; mothers $5 Sunday, May 8)

FISHBONE All we have to say about this show is this: Fishbone should never have to open for anybody, ever. We don't know who Slightly Stoopid is, but with a name like that, we imagine that they're probably "goofy" in a "punk-funk" kinda way. And they're probably huge Fishbone fans. And they're clearly quite popular. Whatever. Fishbone has always been one of our favorite live bands, even though it's been more than 15 years since they released a good album. Angelo Moore's theremin and Norwood Fisher's bass should be prominently displayed in the Rock and Roll Hall of Fame, and these fools who continue attempting Fisher basslines should be shot on sight for blasphemy. Guitarist Tori Ruffin may not be Kendall Jones (Fishbone's original guitarist), but he's also not likely to go off and join a cult, either; plus, any guy good enough to switch between working with Fishbone and working with The Time is good enough to impress us. Not a ska band, not a funk band, not a rock band, they're just fucking Fishbone and we love them more than we love our parents. (with Slightly Stoopid; 7 p.m. at House of Blues; 407-934-2583; $14, $16)

STILL NAIVE OK, we're not the biggest Still Naive fans. (Nor were we big fans of Naive, but we sure liked that early name better.) We're not saying they suck or anything, but if you've ever read this paper, you pretty much know that the whole post-grunge radio-rock thing just ain't our bag. But that's not to say we don't admire these guys. They got signed to a mini-major (Maverick) that didn't know what to do with them, which of course led to their dreams of rock stardom being dashed on the shores of label-merger reality. Fortunately for them, they got a well-recorded album out of the process and, unlike most bands who get screwed that hard by the corporate rock machine, Still Naive still had more than a few fans. So they persevered and tried to make a go of it as an "independent" band. Unfortunately for them, radio rock sounds best on, well, the radio, and without label payola behind them, that just wasn't gonna happen. Inevitable stresses led to the realization that this band, in this incarnation, with this sound, with this name was pretty much a lost cause. But being the stand-up guys they are, Still Naive are going out the right way; instead of just issuing a woe-is-us press release, they're bidding their fans farewell with a live show at which the first 200 people through the door will get a free copy of their somewhat ironically titled Shelf Life CD. Go and wish 'em well. (with Socialburn; 10 p.m. at The Social; 407-246-1419; $10)

FREE COMIC BOOK DAY A recurring national promotion, Free Comic Book Day is the industry's enticement to visit your local specialty shop and pick up a sample of some of the great work going on in the four-color medium. (Playground dope pushers know the selling technique by another name, the "First One's Free" syndrome.) For this weekend's installment, some area vendors have upped the ante by lining up personal appearances by top comics artists – like Phantom scribbler Alex Saviuk, who'll be signing autographs at Unity Entertainment in Clermont (1 to 4 p.m.; 352-242-9755). Other stores have enlisted the services of hometown talent, including Joel Carroll, a contributor to Image Comics' Flight anthologies who also happens to be an associate course director at Full Sail Real World Education. (11 a.m. to 9 p.m. at Coliseum of Comics, Fashion Square Mall; 407-228-1210) Just a few blocks east, Sci-Fi City will host a tag-team appearance by penciller Ethan Van Sciver (Green Lantern: Rebirth) and inker Tim Townsend (X-Men: Age of Apocalypse); Orlando residents both, they'll mark a new chapter in their professional friendship by collaborating on a specially commissioned piece of original art, which will be raffled off to benefit a children's charity yet to be determined. The store will also be descended upon by a couple of Maxim models dressed as Wonder Woman and Supergirl. And in the lonely, comics-addicted days of our own youths, that kind of pulchritudinous visitation would have struck us as charity, too. (2 to 5 p.m.; 407-282-2292)

CENTRAL FLORIDA KRUSH Who knew? All this fuss about the Orlando Magic has overshadowed the kick-off game of our city's new USL women's soccer team – the Central Florida Krush, sister team of the Central Florida Kraze. (Never heard of them, either? They took the 2004 PDL National Championship title and are gearing up for their seventh season of games at Showalter Stadium in Winter Park.) Thanks to the building success of Orlando-grown soccer stars the likes of Michelle Akers, there's promise for the popularity of this sport, but it still takes ticketholders in the stands to make or break the success of the team, no matter the talent. Come see them take on the Carolina Dynamo Women (real name) at the freshly constructed Krush Stadium in the Seminole Soccer Complex. (7 p.m. at Krush Stadium, Lake Mary; 407-682-5425; $7)

CURIOUS GEORGE Long before Bart Simpson, there was another cheeky chimp who captured the imagination of children looking for an antihero. Curious George is the nicely naughty creation of the German husband-and-wife team Margret and H.A. Rey and dates backs more than 60 years now. All told, more than 25 million copies of the children's books have been sold, making Curious George a universally well-known subject for a traveling exhibition that arrives this week at Orlando Museum of Art for a summer-long stay. There's a feminist footnote to the whole Curious George story: In the United States, the books were originally published bearing only H.A.'s name, as the children's-book field was saturated by women and the couple thought it would help the book stand out. Years later, Margret says she thought, "Why the devil did I do that?" and remedied the situation. (Through Aug. 28 at Orlando Museum of Art; 407-896-4231; $8)

BEAT CIRCUS Four years ago, Brian Carpenter left Central Florida to pursue musical fulfillment. Although he was part of the vibrant Gainesville scene and Sam Rivers played at his wedding, he felt – like many of us do at some time or another – that the region wasn't supportive when it came to unusual musical endeavors. So he went to Boston and started Beat Circus, a troupe of musicians who combine circus and vaudeville themes with free-form and avant-garde aesthetics. Imagine Squirrel Nut Zippers backing up Cirque du Soleil in a late-period Fellini film and you're getting close. It's whimsical and kooky and definitely creatively alive. Though we emphatically disagree with Carpenter that our area is a "cultural wasteland," we hope that ever-fickle Orlando doesn't prove him right by not showing up for a visually and musically impressive night. (9 p.m. at Will's Pub; 407-898-5070; $6)