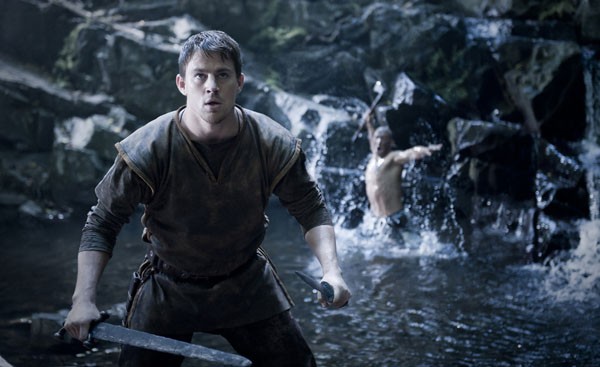 The Eagle of the Ninth, a young-adult novel from the 1950s by Rosemary Sutcliff, was a fictionalized tale of the Ninth Legion, a Roman legion that supposedly disappeared while fighting Northern tribes in second-century Britain. Sutcliff allegedly weaved that piece of history together with an imagined backstory of a real artifact (a bronze Roman eagle) excavated at Silchester in the U.K.

It’s interesting enough source material, even if, as in all things historical, the accuracy of the Ninth Legion’s story has been called into question. In fact, it was the basis for last year’s Centurion, a bloody retelling of the Legion’s (possibly) final stand. Now we have The Eagle, an adaptation of Sutcliff’s novel, and a movie that serves as a kind of postscript to the events in Centurion. Why do we have it? That’s a question the film begs throughout its entire duration.

Decades after the Ninth Legion perishes, thus losing the legionary eagle and adding insult to injury for Rome, the Legion’s doomed commander, Flavius Aquila, has made the Aquila name a disreputable one. (His loss of lives and that stupid eagle brought shame upon the empire.) His son, Marcus Aquila (Channing Tatum), is a quickly rising military leader for Rome, however, and his gallantry defending his company’s post from tribal attackers (in an opening scene that’s also the movie’s high point) has earned him high marks and an honorable discharge due to his injuries.

The problem is, Aquila can never clear his family name sitting on the sidelines. So he embarks upon a suicide mission: to sneak into the Northern tribes’ camp, steal the eagle and return it to the Roman Senate. He brings along Esca, a slave whom Aquila saved from a gladiator’s blade and now owes Aquila a life-debt. (He’s also a native Briton whose father was killed, he believes, by Aquila’s legion. He also speaks the tribe’s language, helpfully.) Much is made of the danger of crossing Hadrian’s Wall into a no-man’s-land of harsh forest and risky mountains.

Here is where the entire production unravels in a jaw-dropping display of narrative chaos: Aquila and Esca (played impressively by Jamie Bell, Billy Elliott himself, all grown up) cross the Wall essentially by telling the intimidating guardians to “Open sesame” – somewhere, Joseph Campbell is screaming from the grave, “You don’t stroll through the first threshold, you idiots!” – and arrive at the belly of the beast (er-whale, sorry Joseph) within minutes, where they ingratiate themselves with the eagle-bearing tribe, get drunk and be merry.

The rest is fait accompli: Magic Flight, Rescue from Without (no, not his father, thankfully – though I was worried that’s what it would be), and on and on. Tatum is a pleasant lug, and I still believe that as square-jawed, empty-headed action candy goes, he’s just fine. The disappointment here comes in the form of director Kevin MacDonald and his woefully lazy pacing and ear for dialogue. MacDonald is a fantastic filmmaker, having already helmed several modern-day greats like the Oscar-winning One Day in September, Touching the Void, The Last King of Scotland and even the underrated State of Play. (He’s also the grandson of film giant Emeric Pressburger.) Yet here it’s as if he’s engaged in willful filler; The Eagle’s filmic pulse never rises. In a sword-and-sandals epic, that’s its own kind of legionary shame.