OST's world-premiere comedy is a funny twist of faith 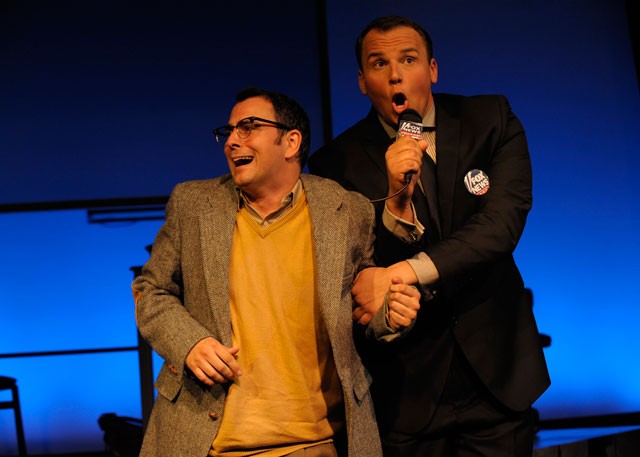 If God does exist, does he get tired of artists questioning his existence all the time? That's the question that haunts The Exit Interview, a slightly naive but eminently watchable attempt at provocation that's currently getting big, deserved laughs at the Orlando Shakespeare Theater.

Taking the field for the agnostics is Richard "Dick" Fig (Michael Marinaccio), a recently downsized theater professor at an anonymous American university. On the last day of his employment, Dick is forced to endure an exit interview with an HR drone named Eunice (Anitra Pritchard). When armed violence suddenly breaks out on campus, Dick and Eunice take cover in her office. Under extreme pressure and with nothing else to do, they furiously debate the merits of their respective philosophies. Eunice is a human Precious Moments figurine who believes that everything happens according to a divine plan; Dick has nothing but derision for faith that blind, putting his trust in intellectual rigor and the pointed agitprop of his hero, Bertolt Brecht.

OST's production represents the world premiere of The Exit Interview, which on an intellectual level is closer to Bill Maher than to Brecht. It's never fully clear if playwright William Missouri Downs is in on the joke that Dick's devotion to empiricism is simply its own form of orthodoxy. But Downs still has a way with a punchline, and director Patrick Flick has done a bang-up job of wrangling the play's almost farcically disparate performance elements – which include numerous flashbacks, fantasy sequences and even product-placement pitches – into a cohesive, hilarious whole. Pritchard is a proven hand at playing priggish administrative types, and Marinaccio fills the straight-man role ably while utility players Janine Klein, Alexander Mrazek, Lauren Butler and Nathan Sebens display their gifts for timing and dialect.

It's kind of sad that, in Orlando, even a pleasantly middlebrow vaudeville outing like The Exit Interview has to be preceded by a content warning. As I listened to Klein and Butler goof their way through an extended preshow disclaimer announcing that the show would offend just about everybody you'd expect it to, I wondered how many fundamentalist Fox-watchers are known to support new works by American playwrights.

Shows what I know – after the performance, the house was buzzing about two audience members who had indeed walked out in a huff. Apparently, they were Germans who had been put off by a reference to Hitler. Point to Downs: It takes daring theater indeed to make us Aryan types forfeit our hard-earned reputation as good sports.