The frightening manifesto that keeps Belle and Sebastian alive

Belle and Sebastian look backward, even as they hope to surge forward 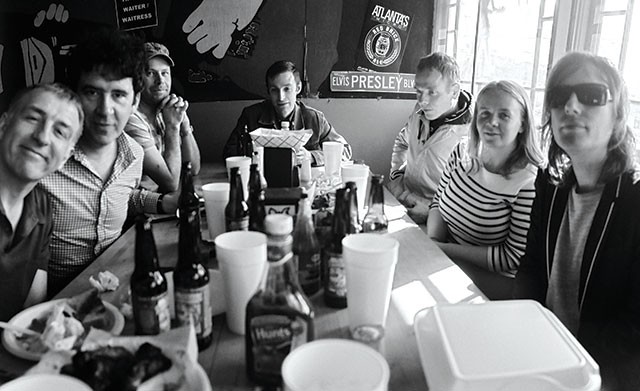 BELLE AND SEBASTIAN with Luke Temple

Belle and Sebastian have been around long enough to witness a revival of the twee pop style they helped popularize. Formed as part of a college music course in 1996, the Scottish six-piece has gone on to release eight albums, most of which are now seeing re-release on vinyl.

It’s all a bit bewildering as what was once old becomes new again. The band’s singer-violinist, Sarah Martin, reports walking her dog recently in Glasgow, where they’re in the midst of putting the final touches on their ninth album. She encountered a friend with another person.

When it came up that Martin is in Belle and Sebastian, the other woman exclaimed, “My son keeps buying your records, and he hasn’t even got a record player yet. That’s what he wants for Christmas, so he can play the records he’s been buying.”

Martin chuckles, impressed by the 16-year old, who hasn’t been alive as long as the band has been together. “It’s really nice when you see younger kids buying a record. It seems almost archaic.”

Certainly, she can appreciate the warm backwards glance since the group was inspired by the ’60s baroque pop of Left Banke, Burt Bacharach and the Zombies. Over the years, they’ve retreated from that a bit, taking their literate pop in more of a rock direction.

Their catalog largely breaks down along the first four releases and the last four, distinguished by Isobel Campbell and Stuart David’s departure following 2000’s Fold Your Hands Child, You Walk Like a Peasant. Campbell and David had become increasingly unsatisfied with the band’s new direction.

“You probably only really notice looking back, [but] there was a real definite desire to make records that sounded good on the radio and to do what you have to [do to] make them a little punchier,” she says.

After recording a soundtrack to Todd Solondz’s movie Storytelling, the remaining members returned to the studio with producer Trevor Horn (Yes, Seal, John Legend, Pet Shop Boys) for 2003’s Dear Catastrophe Waitress. Horn approached Belle and Sebastian after his kids chastised him for the crap he’d been working on.

“They were ‘oh dad,’ and he was like, ‘What kind of music should I be working on?’ and they suggested us,” Martin reports. “He listened to our records and said, ‘Yeah, they do need a producer.’ I think he felt he could make our records sound good.”

It marks the first time they’d ever worked with a producer and it’s a well-regarded album. It opened the door for them to team with Tony Hofer for their fine last two discs, initiating changes that have influenced the new album. Hofer enforced greater concision. Where Stuart Murdoch brought seven or eight verses, Hofer insisted he trim it back to four.

“Nobody had ever really involved themselves in the structure of anything before. We just sort of played things the way they’d come out on the paper, really. So that was interesting,” Martin says. “We weren’t quite sure how that was going to go, but I think it introduced a new discipline.”

“We had [a manifesto] within the band that there shouldn’t be an extraneous word. Everything should come and say what it’s meant to say and it should get out again,” Martin says. “There shouldn’t be any waffly bits. We’re not just filling up space. We need to save the space for what people actually want to say. Everything is pretty direct on this record. It was a slightly frightening manifesto to have, but I think we’ve kind of done right by it.”

We’ll find out for ourselves sometime early next year.