The Girl With the Dragon Tattoo 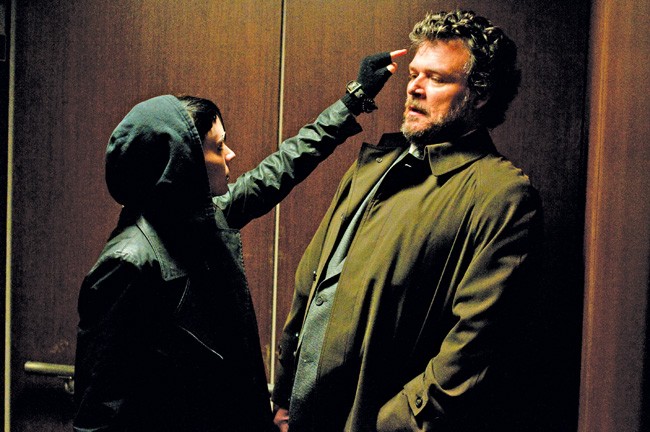 The Girl With the Dragon Tattoo

David Fincher, the one-time music-video pioneer turned Hollywood visionary, couldn’t make a bad film if he tried. But The Girl With the Dragon Tattoo, Fincher’s take on the Swedish literary phenomenon that was just recently adapted in its native Sweden, may be his weakest. Author Stieg Larsson’s pulpy whodunit introduced one of this century’s most iconic characters, cyberpunk hacker Lisbeth Salander, and then neglected to give her much to do. Niels Arden Oplev, director of the original film adaptation, brought Salander to exhilarating life with the casting of Noomi Rapace, whose waif-like frame and anti-ballistic defense mechanisms defined the liberated and revenge-fueled heroine, but it also kept her apart from her foil, disgraced journalist Mikael Blomkvist, for far too long.

The film opens with a visually breathtaking credits sequence (a Fincher staple) that incorporates twisting Fi-tech, thick sludge and the shape of a woman, all set to Karen O’s banshee-esque cover of Led Zeppelin’s “Immigrant Song,” impressing upon viewers that this may be the Salander we’ve been praying for. We then learn of Blomkvist (Daniel Craig), who recently took on billionaire industrialist Hans-Erik Wennerström in an influential news-magazine piece, but lost a libel case to Wennerström. In taking him on, however, Blomkvist draws the attention of the Vanger Corporation, an old-money, family-run empire. They hire a security company to conduct a thorough examination of Blomkvist before hiring him to solve a family murder mystery.

The security firm has a go-to hacker they can rely on to dig up anything on anyone: Salander, an orphan whose kindly caretaker has a stroke, putting her finances in the hands of a sexually abusive new guardian. The second Blomkvist shows up at Salander’s door, the screen crackles with magnetism – Craig and Mara have exactly the connection and chemistry they should, but, as in every incarnation of the story thus far, it occurs far too late.

Blomkvist asks Salander to help him solve this mystery, focused around an island in Sweden, a teen girl who vanished from the island decades ago, and also animal sacrifice, bible verses, everyone’s-a-suspect paranoia and a trail of evidence so mystifying that even Salander struggles with it. Filmed partly in Sweden, every frame of Fincher and cinematographer Jeff Cronenweth’s creation is heartstoppingly beautiful. Location is Fincher’s strongest quality, and every log cabin, train station and archival vault here feels lived-in, bone-chillingly cold and full of surprises.

Craig proves once again a generous actor, maintaining the center of gravity while Mara shreds every scene she appears in. Mara acquits herself well as Salander; she’s believably tough, if not quite as flamboyantly wounded as Rapace’s take. Fincher, despite his credible reputation as a fearless director, flinches in the face of Salander, however, and it occasionally mars Mara’s artistic expression. The hacker scenario promised in the opening credits never pays off, unless the essence of anonymous espionage involves Google and Wikipedia; Fincher guides our attention toward endless visual cues that explain Salander’s attitude better, apparently, than he thought Mara could (the T-shirt she wears when first meeting Blomkvist, in a nod to David Lynch’s Blue Velvet, reads “Fuck you you fucking fuck”). One glaringly odd bit of false mannerism meeting overeager stage business comes when Salander confronts one of her abusers in an elevator: After intimidating him perfectly well, Fincher can’t resist adding the swoosh of her hoodie, framing her against the door (a process that requires one too many steps to be considered badass), which then opens to throw her into silhouette. It’s painfully choreographed and, worse, wholly unnecessary.

Still, the mystery wraps up nicely, and Craig takes on the brutal climax full-force. I only wish someone – anyone – would eventually do right by Lisbeth Salander. After all she’s been through, doesn’t she deserve it?