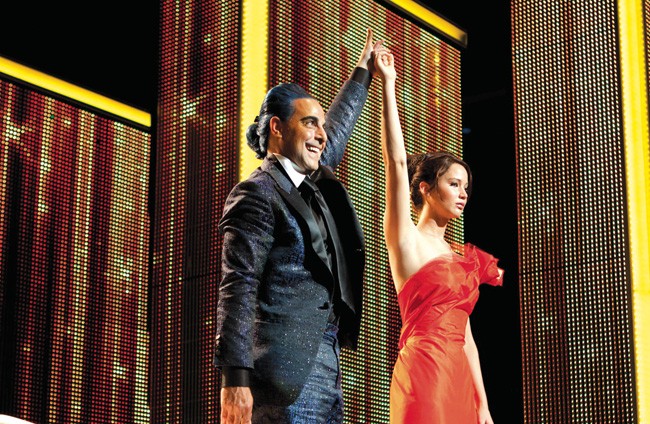 Now that the Harry Potter series has wrapped and the Twilight saga lurches toward its final installment, The Hunger Games has swooped in as a sort of allegorical palate-cleanser, a post-apocalyptic showcase for a much needed breath of fresh air in the form of Katniss Everdeen, a YA hero who's actually a young adult. Everdeen, to our great relief, doesn't make decisions based on old-world vampire orders or on the advice of ghosts, goblins and archaic wizards. By nature of the titular Games – a Survivor-meets-Super Bowl death match in which 24 “tributes” ages 12 to 18 from around the country are let loose in a woodsy arena and forced to kill one another for sport and amusement – the characters of The Hunger Games have no choice but to rely on their all-too-human instincts.

Especially for someone who hasn't read the Suzanne Collins trilogy, that relative simplicity is a gift, and it's what propels Gary Ross' film (co-written by Ross, Billy Ray and Collins herself) from the stark Appalachian opener, in which we meet Everdeen (Jennifer Lawrence, of Winter's Bone), a 16-year-old hunter-gatherer forced to provide for her family after the death of her father, to the heart-pounding start of the deadly game, or “bloodbath” as it's referred to by Everdeen's impromptu trainer, former Games winner Haymitch Abernathy (an excellent Woody Harrelson).

A bit of back story tells us that the Games were originally conceived as punishment for a class war against the wealthy fascists at the Capitol, but has settled into an anticipated tradition. One boy and one girl from each of the 12 “districts” of the nation of Panem (what used to be North America) are chosen at random – though, in one of my favorite touches, your name is put in the hat more than once (much more) if you've requested government assistance. (Don't anybody let Rick Santorum read these books!)

Everdeen volunteers in her younger sister's place, and she's sent to the Capitol along with Peeta Mellark (Josh Hutcherson), a boy she knows but seems hostile toward. The Hunger Games comes most alive during the long yet briskly paced lead-up to the start of the match. It's a nationally televised pageant, and we go backstage as Everdeen, Mellark and a couple dozen other kids of sometimes shocking youth (yes, 12-year-olds are like the weak gazelle in this Serengeti) and even more shocking skill (some districts train volunteers from an early age) are primped, styled and thrust out on stage.

Before you know it, the countdown begins and this band of doomed participants is told to kill each other – and that they do. The Hunger Games expertly toes the PG-13 line, suggesting more than showing, but not shying away from brutality as an integral part of the film's and novels' grim message. Although the run time is close to two and a half hours, Everdeen and her world never overstay their welcome and even better, Ross doesn't use the last 10 minutes to set up next year's sequel, Catching Fire. Having seen The Hunger Games, I still remain clueless as to what's in store – yet another way this film bucks the YA trend. Whatever Katniss has planned, I'll be lined up for it.