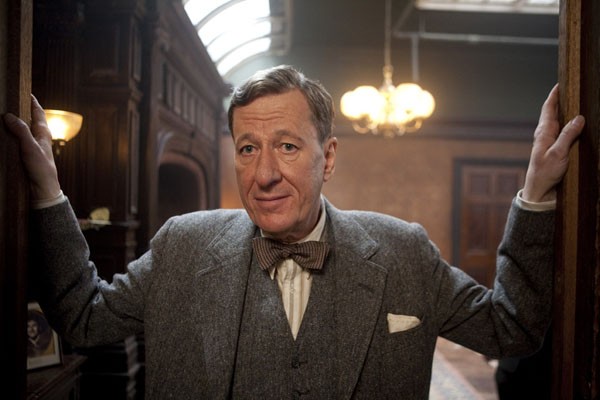 
Poor Prince Albert was surrounded by a series of worrisome situations in the mid-to-late-1930s: His father, King George V, was on the brink of death; England was on the brink of a second World War; and his would-be-king older brother, Edward, was a secret Nazi sympathizer who wanted to abdicate the throne in order to marry Wallis Simpson, a twice-divorced American.

It got worse for dull Albert, who was a sickly child and, as an adult, viewed as a weak royal: He had a crippling stuttering problem and, therefore, a massive fear of public speaking. The globalization of live radio meant that he now had to address the public in embarrassing fits and starts. While that may seem like a minor problem for a dramatic, Oscar-baiting period piece to tackle, given the circumstances of “Bertie’s” ascension, it was one that threatened to make the entire country appear submissive to Hitler’s  alpha dominance.

The King’s Speech, a lively, engrossing trifle directed with gusto by Tom Hooper (John Adams) from a winking script by David Seidler (Tucker: The Man and His Dream), zeroes in on Bertie’s stammer and presents it as no less than fate-of-the-world material. It’s hard to argue with those stakes from the moment the film opens: Albert (a pitch-perfect  Colin Firth), accompanied by his loving, delicately assisting wife (played beautifully by Helena Bonham-Carter, who ages more gracefully every year) attempts to make a speech at the British Empire Exhibition at Wembley Stadium. All he can manage are a few random syllables, belched out with desperation, to the horror of the attending crowd.

Afterward, Bonham-Carter’s Elizabeth (their daughter would become Elizabeth II) is willing to try anything and so happens upon Australian speech therapist Lionel Logue (Geoffrey Rush), a commoner known for his idiosyncratic methods.

The film takes us from Logue and Albert’s tenuous introduction through Albert’s ascension to the throne and, finally, his historic speech to the nation on the eve of WWII. Hooper keeps these momentous events, if not in the foreground, at least imposingly on the sidelines as constant reminders of the importance of Albert and Logue’s often silly-looking communication exercises and that when the two have a falling out – as they often do, as their personalities are diametrically in opposition to each other – the consequences for both men could be great.

The King’s Speech fills every corner of the screen with fascinating turns of all kinds, from the excellent Timothy Spall’s Winston Churchill (of course Timothy Spall!) to a scene-chewing  Michael Gambon as Albert’s father to Guy Pearce in another of his (welcome) surprise appearances as the lovesick (and possibly evil)  brother, Edward.

Although far from a traditional end-of-year monarchical film, The King’s Speech is an entertaining sidebar to history and, unlike the King’s actual speech, is a joy to sit through.