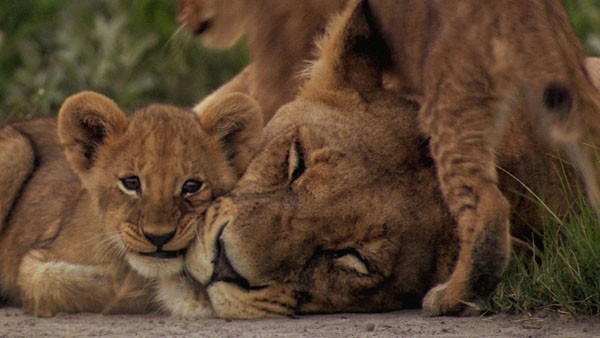 The choice of Jeremy Irons as narrator of this simultaneously majestic and horrific National Geographic documentary is a brilliant one: Not only does Irons' silky, ponderous timbre lend gravitas and solemnity to the story of a lioness, abandoned by her mate and charged with protecting her cubs against a seemingly endless parade of daunting predators, Irons' voice also serves as a winking reminder of Scar, Irons' Claudius-esque evil uncle in Disney's Hamlet retelling, The Lion King. The subconscious association hints at the peril lurking just around every corner in Botswana, where hunters, developers and wildfires have diminished the population of lions and driven those remaining into each others' territory, forcing bloody battles between pride leaders like the jaw-droppingly violent clash that opens the film. (The movie states that the number of lions in Africa has shrunk from around 400,000 half a century ago to between 20,000 and 50,000 now.)

The single mother we follow, Ma di Tau, will scratch and claw for food, defense and survival, and will fail many times to heartbreaking effect. But her biggest war is against the filmmakers, Dereck and Beverly Joubert, who consistently demean the proceedings with laughably anthropomorphic tropes like flashbacks meant to illustrate Ma di Tau's memory and giggle-worthy narration lines regarding the lioness' mental state.

Ma di Tau overcomes those drawbacks, just as she does some remarkably impossible circumstances. It should be noted that the film's PG rating could be misleading: Although we're dealing with nature here and its cruel, inevitable circle of life, The Last Lions isn't exactly Disney-fied. It's uplifting, but also raw and brutal. That makes it a very good movie and one wholly inappropriate for single-digit-aged cubs.