You might read the title of this show by Anna Cruz and Adam Lavigne and think it's a coincidence that it goes by the same name as Belinda Carlisle's 1987 slice of pure earworm pop. Or you might even think the name is ironic. But you'd be wrong.

"Yeah, we were listening to that song," says Lavigne. "It's 100 percent the genesis. It's really simple but you're talking about some really big concepts there."

Heaven Is a Place on Earth opens Friday at the Mills Gallery, showcasing the latest collaborative efforts of Cruz and Lavigne, partners in life as well as in studio practice.

"Every year we've been together, we've put together an art show," Cruz says. "As the years went on, it became apparent that our work complements each other really well." Lavigne echoes, "Collaboration is a pretty important part of our work at this point." Cruz picks back up: "We spend all of our time together. Our relationship and our studio practice are completely intertwined; it's not something that we planned on ... [but] it's so time-intensive, it's nice to have a partner." 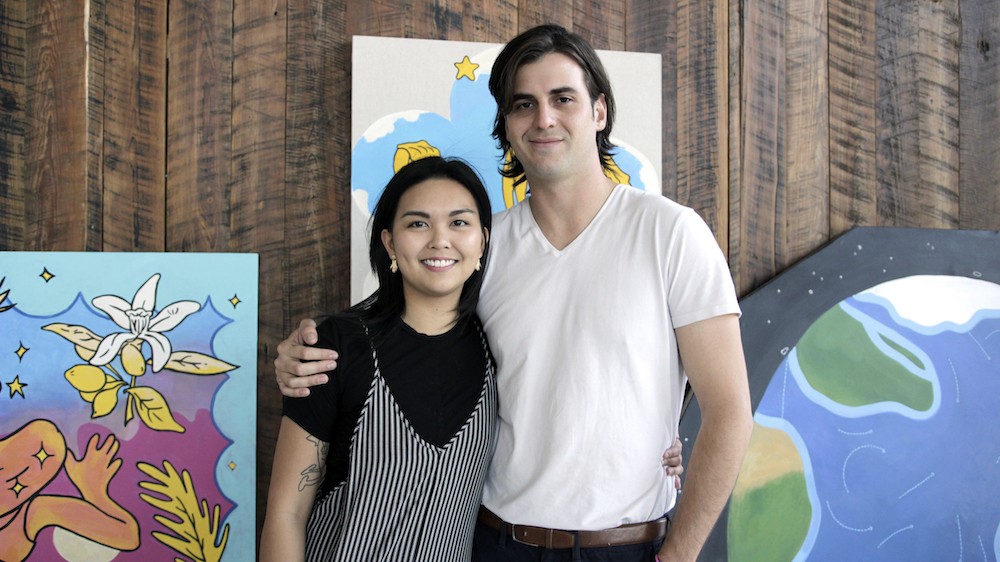 They've been creating work together for almost five years, and it tends toward the deceptively unpretentious. Check your assumptions: A lack of complexity doesn't imply a lack of profundity, nor does it necessarily signal pop-culture, meme-generation irony. The bright colors and simple linework here, reminiscent of comics, explore deep themes. But cartooning, by definition, is a serious skill set that allows the artist to present complicated subjects in easily understood forms, or, as Lavigne puts it, "descale a concept to represent it in an adjustable way."

Though each creates their own pieces, it's sometimes difficult to tell who made what. (One clue is the canvases: Cruz uses pre-stretched ones; Lavigne builds his own, often in complex geometric shapes.) They share a cheerful color palette, and each seems to work from a personal set of symbols, an individual iconography. The dovetailing of their work, Lavigne says, was as simple as just sitting down making drawings together.

For this show, Lavigne has been painting celestial bodies and thinking about human notions of heaven and the distilled symbology of earth. On the other hand, Cruz's richly verdant paintings evoke heaven in a more sensory way: "I like creating imagery that's really lush and like paradise, where looking at it is like spoiling yourself," she says. "It's like eating an ice cream cone – I want it to feel so good when you're looking at it."

Referring to the show's namesake, Lavigne points out, "Attempting to make something like heaven or utopia here on earth is a very idealistic thing."

"I don't feel like there needs to be a bigger idea behind the image," Cruz says firmly.

So stop looking for deeper meanings, put down your irony and just enjoy the ice cream.