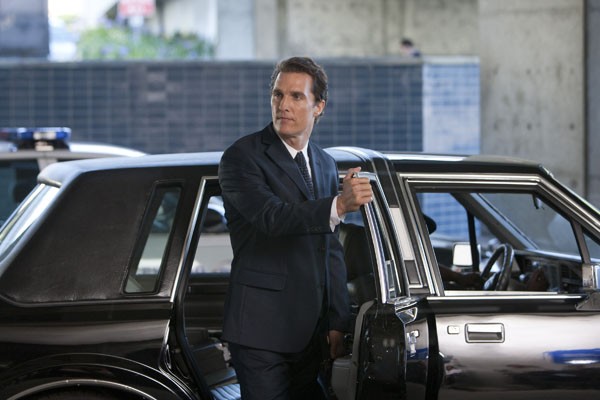 It's understandable if, for those unfamiliar with author Michael Connelly, the title The Lincoln Lawyer followed by the words "Matthew McConaughey" induce bone-chilling shudders accompanied by visuals of the actor in his typical courtroom attire - dazed and bespectacled, as seen in Amistad and A Time To Kill ... shudder - giving a fiery, bongo- accompanied speech in the forgotten case of Mary Todd Lincoln v. the Ford Theatre's Refund Department.

I was besieged by such nightmares heading into an early screening of The Lincoln Lawyer. It was early enough that I hadn't seen or heard anything about it, and I imagined the worst. What I saw was a completely different Matthew McConaughey - gaunt, mature, compelling - in an enthralling, gritty crime drama from an utterly fresh new talent: young director Brad Furman.

Based on the well-received 2005 novel by Connelly, The Lincoln Lawyer concerns McConaughey as the titular defense attorney who specializes in freeing or plea-bargaining the biggest scumbags in downtown and East Los Angeles. It's partly because of his sketchy client base that he opts to run his one-man firm from the inside of a constantly moving Lincoln Town Car.

Furman, working from a tightly coiled script by former Hill Street Blues writer John Romano, refreshingly takes his time setting up the film's big case; we really get a chance to see McConaughey's Mick Haller in his element, from smooth-talking his way out of trouble with a biker gang to greasing the wheels of behind-the-scenes courtroom allies such as bribable bailiffs and an in-the-know bail bondsman (John Leguizamo). Furman and McConaughey show us Haller's tricks of the trade, to demonstrate just how good he is at his job, so that when the rug is pulled out from under him via rich boy Louis Roulet (Ryan Phillippe), a dilettante accused of beating and attempting to murder a prostitute, the audience feels just as disoriented as Haller.

There are other complications: Haller's ex (Marisa Tomei) is a prosecuting attorney whose feelings for Haller seem to be coming back; Haller's research assistant (William H. Macy) has come across evidence that alters Haller's entire moral fabric; and there's still the business of acquitting Roulet.

McConaughey has never been better as a man fueled by a complicated code: He sleeps at night having freed the scum of the earth because that only means the good guys (cops, the prosecution, judges) didn't do their job. He's a self-admitted villain who can only be stopped by sound police work, and that's hard to come by in this L.A. McConaughey, his forehead higher and his eyes a little deader than  previously seen, gives himself over to the material. With each turn of the screw, his long body displays his wear and tear, from his gait to his muscle tension. By the time the Roulet case spills over into his personal life, he is utterly believable as a man pushed to his breaking point.

The Lincoln Lawyer is a particular triumph for Furman, whose debut directorial feature, 2007's Leguizamo vehicle, The Take, was falsely assumed to be a straight-to-DVD genre thriller and swept under the rug. Here, Furman puts all his cards on the table. Somehow, he got Matthew McConaughey to do the same, a move that may alter both of their careers.