Even Paul Thomas Anderson's nothing is something special 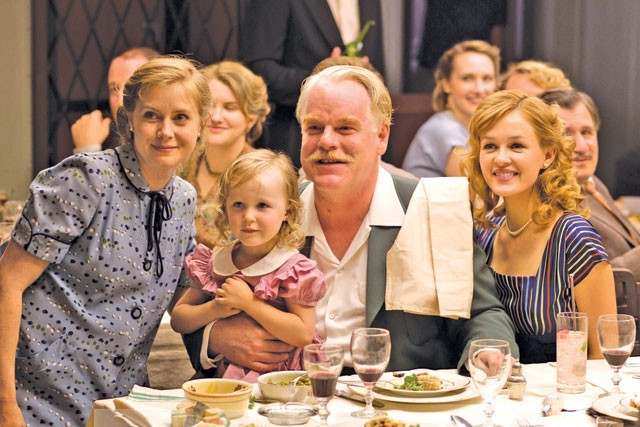 If Paul Thomas Anderson's The Master added three key words to its title – and His Emissary – there'd almost be no reason to see it. (That's a big "almost," mind you.) The 2009 exploration of the hemispheric brain by Iain McGilchrist – its full title is The Master and His Emissary: The Divided Brain and the Making of the Western World – may be the unintentional inspiration for PTA's vicious character study of two men, one (Philip Seymour Hoffman) claiming to know all the answers, and the other (Joaquin Phoenix) desperately trying to escape them. But for all its thematic strength – one pivotal scene features Phoenix's Freddie Quell, the Emissary, and Hoffman's Lancaster Dodd, the Master, in adjacent jail cells, with Phoenix flailing like a rabid dog on the left and Hoffman cool as a cucumber on the right – it can be jarring to slowly realize just how unimportant everything else in the film is to Anderson's point.

The Master opens with Quell's raunchy, boozed-up drifter bouncing from job to job, sometimes running for his life due to his shocking inability or unwillingness to suppress his primal instincts. Quell is clearly of the earth – a tactile-minded, prematurely feeble scoundrel who seems to need to push people, if only for the human contact. He crafts a quite magnificent blow-up doll out of beach sand and humps it; he makes his own booze out of practically anything (which can be deadly, unless "you drink it smart"); he stows away on a yacht, fights bigger men than himself over practically anything and seems to view all women as forever naked. He's given a Rorschach test and all his answers are comprised of two things: penis and vagina. He's called a "silly beast" and a "dog."

After one life-saving escape, he stumbles upon a moon-eyed cult by any other name, led by Dodd and his true-believer wife, Peggy (Amy Adams). Along with their grown son and young daughter, the Dodds are in the fledgling stages of a Scientology-esque movement called the Cause, dodging arrest warrants for fraud and enduring with short fuses the taunts of the nonbelievers. As played by a slimmed-down Hoffman, Dodd tries, at least, to float above the fray of reality in his self-created, galactic Truth that's backed by scientific research that must be around here somewhere. He touts a hands-clean worldview where any ailment or human weakness can be excised through discipline, obsessively recorded confession and brainwashing exercises. It's like Buddhism without the hard work, or Vulcanism with rationality thrown out the window.

When Dodd takes Quell under wing, either for his own amusement or for the challenge (possibly both), the two men seem destined to change each other somehow. Aided by Jonny Greenwood's typically jarring score, Anderson's painterly frames and Hoffman and Phoenix's lockstep march toward tragedy – or so it seems – The Master hypnotizes, shuffling between hemispheres like a metronome. Phoenix snarls, Hoffman purrs and Adams plays good cop. But meanwhile, supporting players like Laura Dern, Amy Ferguson and Jesse Plemons drop out unceremoniously almost as soon as they've made their presence known. An overseas epilogue adds almost nothing to the story, while tedious sequences of brainwashing lead to few revelations beyond what the characters going through them tidily conclude themselves. (Then again, that's kind of how that mystic crap makes millionaires of its peddlers.)

Ultimately, it's a movie about the right brain, the left brain and all the toxins of life that swim between them. Is Hoffman's cult one of those aggravators? PTA doesn't really say, opting to float just as much as the Dodds above petty matters such as plot in favor of predetermined theme, leaving little to be resolved by something as earthbound as a movie. Like the Cause, it's too self-involved to mean much of anything, but the buildup to that nothingness is really something to behold.