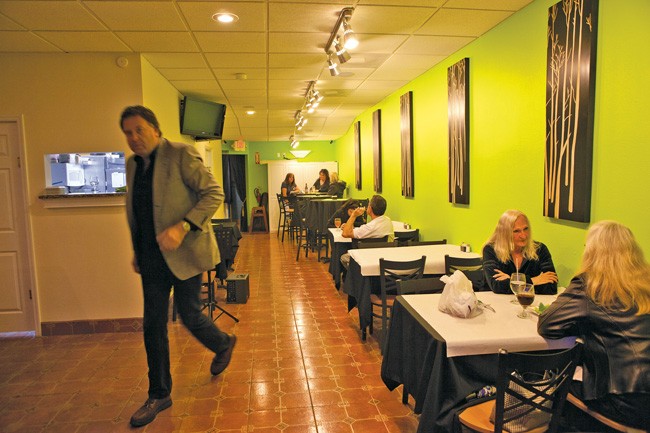 In many countries, and certainly in Latin and South America, the afternoon meal is the grandest of the day’s repasts. So when I popped in to Venezuelan eatery the Nou one recent afternoon, I felt a proper daytime feast was in order – doubly so, since I hadn’t eaten breakfast. When all was said and done, I was as gorged on Venezolano fare as Hugo Chavez on reformist doctrine, a doctrine that also bleeds into the Nou’s kitchen – not in the form of jingoism, but in the way the Nou’s proprietors, Giancarlo Cordoba and Alexander Beliz, are trying to change perceptions of Latin eateries. While the dishes I sampled weren’t exactly revolutionary, they offered a different take on a cuisine many reduce to rice and beans. Further, everything here is made from scratch, nothing canned, and that simple act makes a world of difference.

Thankfully, the restaurant’s interior doesn’t resort to the utilitarian practicality of Amazonas; nor will you find the tourist hordes that crowd Q’Kenan. The Nou’s design aesthetic is founded on a refreshingly simple urbanity; walls are painted an electric lime green and decorated with a series of identical rectangular paintings. Chefs and servers appear determined to diversify the clientele, so if you’re new to the cuisine, expect to get an education on the virtues of Venezuelan fare.

Where else to start but the arepa, Venezuela’s culinary contribution to world cuisine? Instead of bread, a basket of the fried miniature corncakes was presented along with a scoop of fresh butter. Addictive as they were, I refrained from ordering a stuffed grilled arepa, as my waitress informed me that they’re typically eaten for breakfast and dinner. So, I opted for the pabellón criollo ($9), a simple, hearty and filling platter long considered Venezuela’s national dish. I got a mound of moist seasoned shredded beef (a la ropa vieja), white rice, black beans, plantains, a plain grilled arepa and, in the version served here, a fried egg on top. In my book, samosas will always beat out empanadas in the fried food-pocket category, but the cheese empanada ($1.50) served here gave me cause to rethink my stance, and that stance was further tested when I polished off a beef empanada ($1.50) with an accompanying salsa. (Request the two house-made hot sauces for a little extra punch.) Whether or not you feel a cold coming on, do yourself a favor and get a bowl of the beef soup ($4.50). The Venezuelan sancocho teems with pliant chunks of beef, carrots, yuca, potatoes and, yes, the requisite cob of corn.

With stuffed arepas on my mind, I caved to temptation and got a reina pepiada ($5) for takeout. It’s a wonderful mess of a sandwich with a chicken-salad-like stuffing along with avocados, carrots and potatoes. Cachapas, those sweet-and-salty corn pancakes, are noticeably absent here – a shame, considering I’ve even enjoyed them for dessert. That said, I energetically devoured the quesillo ($3.50), a dense flan lathered in liquid caramel and flavored with “a secret ingredient” I surmised to be rum. Fresh fruit juices (like mango, $3) are worthy beverages, but their coffee offerings certainly need to be expanded.

The Nou’s awkward locale – it’s sandwiched between a nail salon and a cyber café in the Forest City Center strip mall – may pose an obstacle to Cordoba and Beliz’s ambitions, but there’s plenty of reason for area diners to support the Nou kid on the block.