The restaurant melodrama that's taken place in Ivanhoe Village over the past few years has been thoroughly soap opera–worthy, what with the nefarious characters, cursed locales, alleged criminality and just good ol'-fashioned backstabbing. It's like the Ivanhood is our very own Port Charles (general hospital and all). To twist plotlines even further, a couple of flashy newcomers — Russell's and the Pinery — have set sights on the leading role. They stare each other down across the Ivanhoe Boulevard divide, both vying for the attention of the pretty people. Russell's has to feel a tinge of jealousy, or perhaps regret, at seeing the Pinery's patio bustle with the very clientele they're trying to attract. Why did we enclose our outdoor deck? Why?!

Either way, I'd expect things to get a bit prickly between Russell's and the Pinery, two restaurants celebrating the neighborhood's roots as a once-thriving pineapple farm, the latter going so far as to incorporating it into its name. But after a couple of visits to the Pinery, my thinking was: Why not incorporate the pineapple into the menu as well? Perhaps into a vinaigrette for a salad; or in a salsa for the fish tacos ($16); or in a sauce for the pork chop ($30)? Granted, the tropical fruit is blended into a bacon jam used on the double-pattied smash burger ($16), as well as the lovely hummingbird cake ($9), but not much else.

That's not to say chef Naomi Freeman's menu of dressed-up Southern comfort is in any way undeserving. We gobbled down fire-roasted corn fritters ($10) topped with a roasted poblano aioli and cotija cheese, as well as a smoked fish dip served with pickled onions, pickled jalapeños, smoked lemon and club crackers. Yes, even those grouper tacos stuffed with a citrusy slaw and a smoked lemon herb aioli drew praise.

In true Southern fashion, the grouper is also offered as a pecan-crusted entrée ($32) with honey-roasted sweet potatoes and charred Brussels sprouts. The fish was given a gimmicky tableside pour of beurre blanc, but pour control has since been handed back to patrons. Those who don't like their fish overly adulterated, particularly a fish as delicately flavored as grouper, will certainly appreciate the gesture. There's nothing delicate about those sides, however — this is a filling dish.

So is the hefty Frenched pork chop, which, on our first visit, was topped with a thick bourbon-apple puree. The sauce is now properly served beneath the chop and sided with the same sweet potatoes and green beans — a small improvement that shows how serious the Pinery is about becoming the neighborhood's go-to destination. The yard bird ($27), a spatchcocked beauty, comes with broccolini and, yep, honey-roasted sweet potatoes. For being a higher-end restaurant, I would've liked Freeman's dishes to encompass seasonal flavors as opposed to banking on weighty autumn notes. Lighter sauces and simple preparations don't negate the comfort factor, in my book. 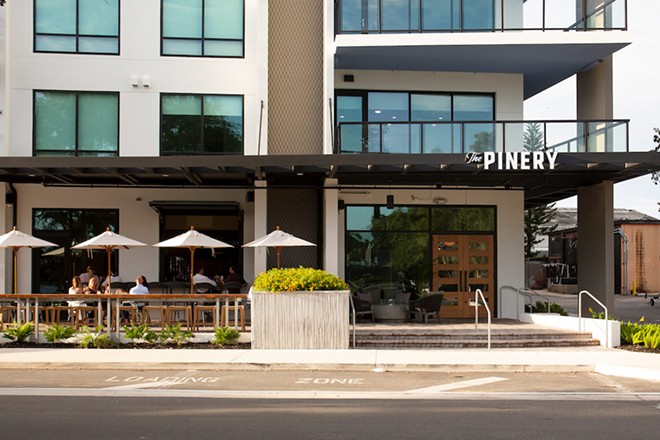 Admittedly, I could eat Freeman's cornbread creamed corn ($5) any day of the year, even for dessert, though the aforementioned hummingbird cake, as well as the sour orange pie ($11) with its fluffy meringue and coconut-brown-butter crust, make better endings. The pie sits next to a brush of Luxardo Apricot and brandy sauce, but, again, here's a lost opportunity to incorporate the pineapple. A couple of the Pinery's cocktails certainly do, as does the restaurant's design in its color palette, striking textural elements and photo walls.

Will the Pinery give the pineapple more prominence on its menu? Will a jealous neighbor spark a pineapple-themed restaurant war? Will a cursed and vacant locale reverse its fortunes and rise to the top of the 32804 restaurant heap? Or will Better Than Sex foil them all with its fine form? To be continued...