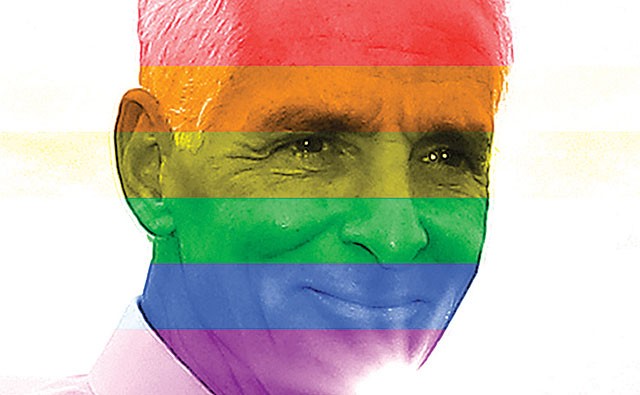 “It’s going to take everything we have to beat Rick Scott, given his virtually unlimited resources and his incumbency. There is far too much at stake for our community not to get in this race enthusiastically and immediately.”

Amount of reported contributions raised through May 2014 in Charlie Crist’s campaign account. An additional $8.2 million has been raised for the “Charlie Crist for Florida” political action committee.

Amount of reported contributions raised through May 2014 in Gov. Rick Scott’s campaign account. An additional $28.1 million has been raised for the “Let’s Get to Work” political action committee, though $12.9 million has already
been spent.

Amount of reported contributions raised through May 2014 in Nan Rich’s campaign account. An additional $112,815 has been raised for the “Citizens for a Progressive Florida” political action committee.

Crist be with you

It seems like only yesterday – OK, it was 2006 – when we first unsheathed our trusty-but-clunky gaydar device (the B-MANES 3000™) and waved it cunningly in the general direction of then-gubernatorial hopeful Charlie Crist. All the bleeps and blithers you can imagine spurted from the mechanical dipstick – oh, and some bizarre opponent with the Reform Party “outed” Crist on the radio, too – yet we were hardly able to cock a brow at the assertion that the man who would later be governor was the man who had for many years been secretly gay. But, oh, did we have fun with it – right up until the moment that Crist married his wife, Carole, in 2008 (just in time to launch a failed senatorial bid!). Alas, it was proven by every one of Carole’s perfect, glistening teeth and cascading tresses of brunette hair: Charlie was straight. Totally.

Well, last week the gay came back to Crist, only this time in a manner we never could have imagined when the lithe Lothario was pitching for the Republican team. First, though, the expected happened. Imprisoned ne’er-do-well and former Republican Party of Florida chairman Jim Greer tossed out his tell-all book, The Chairman: The Rise and Betrayal of Jim Greer, which, naturally tried to pin Crist’s tail on some masculine donkeys in between numerous copy-editing errors. It should be noted that Greer has every reason to try to smear Crist’s campaign, right down to the likely payoff he took from state Republicans to shut his mouth and plead guilty last year. Appropriately, everybody blinked in unison, and the book disappeared from the shelf marked “relevant” almost as quickly as it was filed there.

But then something magical happened! On June 11, we received an email that Crist would be making an appearance in Miami on Thursday flanked by Equality Florida Action political action committee chair Stratton Pollitzer, and it didn’t take a decoder ring to suss out what that would mean. Crist was coming out of the closet!

Uh, no. It was sort of the other way around. Since Crist’s announcement last fall that he would indeed be running for Florida governor as a well-heeled Democrat, there’s been rampant speculation as to which progressive group would leap first in his favor. Sure, he’s got some rank-and-file union support, but, within the Democratic party, a schism was erupting: Progressives don’t really trust party-hopping Crist, yet most of them are aware that their only other option, Nan Rich, couldn’t spark a campfire, much less a get-out-the-vote initiative. He’s the rock, she’s the hard place. Uh-oh.

On June 12, the scales tipped.

“Florida is at a critical moment in our struggle to end discrimination, and the next Governor will have a tremendous impact on the everyday lives of lesbian, gay, bisexual and transgender people in our state,” EQFL’s Pollitzer said in a statement endorsing Crist. “Charlie Crist has taken a clear stand for equality and fairness and is delivering a message that will inspire the growing pro-equality majority in our state to stand on the right side of history.”

Moments later, the Human Rights Campaign followed suit with a statement: “We are honored to stand with Charlie Crist in his campaign to be the next governor of Florida. Gov. Crist will work to improve the lives of all Florida families – including LGBT families – and for that he has our gratitude and our support.”

So how’d that go over? An unscientific poll – meaning a certain senior staff writer’s Facebook page – showed mixed results, to be sure. The Nan Rich squad dug in its heels, reminding everyone that they will NOT turn out for Crist in November, because that’s productive. Meanwhile the Crist-ians seemed to pat Rich on the head and say, “Maybe next time, because this time you’re not doing so hot.” Our Sentinel boyfriend Scott Maxwell urged people not to rewrite history, reminding Crist’s followers that he was indeed pulling the same Pam Bondi, anti-gay-marriage schtick on the gay adoption issue when he was governor, so there. There are no clean slates.

As for Rich, she could only muster a few bristles about her unbending support over the years for all things bright and gay, including marriage and adoption. “My record is there on social justice issues and equality for all people,” she told the Sun-Sentinel. “I have not changed my position.”