The politics of dickpunching: Bloodsport and more in Trump’s movie syllabus

That Bloodsport is Donald Trump's favorite movie is, like so many things about Trump, thinly sourced, apocryphal yet pathetic, and regularly reported as fact.

He once praised the 1988 Jean-Claude Van Damme vehicle, a crude tapestry of gnarly battles and quiet-moment scenery-chewing about an American’s victory in a Hong Kong underground fighting tournament, in Mark Singer’s 1997 New Yorker article. And that's about it.

But facts don’t matter with Trump, and it makes cosmic sense that Bloodsport – which was released 30 years ago on Feb. 26 – would be Trump's favorite movie. It says something about political discourse too: The turning point involves its hero, Frank Dux (Van Damme) proudly punching someone squarely in the dick.

Trump is full of it, and the real-life Frank Dux was too.

Like Gatsby in a karate gi, West Coast martial arts instructor and veteran Dux turned his life into a grandiose story of covert operations and victory in a fighting tournament called the Kumite, which he recounted to karate magazines not so hot on fact-checking. Eventually, his account of those events became Bloodsport. That’s when the Los Angeles Times exposed its “true story” as a lunkheaded hustle: The Kumite trophies Dux won were from a Hollywood-based trophy manufacturer, a Kumite-related organization’s address was Dux's own, the “secret” medal of honor he was awarded seemed sketchy, and a few friends half-assedly corroborated his stories. ("If he says it's true, it's fine with me,” a high-school buddy told the Times.)

As for Dux’s underground work in Asia – which included saving orphans from being trafficked by selling the sword he won for winning the Kumite to buy their freedom – it’s hard to prove, Dux explained, because these were “clandestine” missions. It is good mythography, and his audience of karate aficionados were primed to embrace it no matter what.

“If it was anybody else, I'd say what's going to happen to you would be a lesson to you. Only you're going to need more than one lesson.” – Citizen Kane

Trump frequently cites Citizen Kane as another favorite, because of course: It's a massive critique of power and control that flexes and bloviates like the powerful, so it appeals to powerful bloviators, the way rich coke-snorting dickheads like The Wolf of Wall Street, or man-baby losers love Garden State.

"As Trump watched Van Damme drop into a split, stick his fist straight out, and bop his opponent in the junk, a unique example of how Trump pops the hood on reality followed." tweet this

Trump's Bloodsport love, meanwhile, is cast as yet another example of how un-presidential he is – a 1988 actioner is surely beneath the presidency. Worse, as detailed in the New Yorker, is one of his sons fast-forwarding to the ass-kicking parts, squashing the movie into a supercut of thrills. Through this, you can learn something about the absurdity of respectability politics that mar political conversation: The problem with Trump is, as always, not so much his opinion or his point of view, but how he goes about it. He doesn't even watch his favorite movie; he races through it like it's porn. As if Trump's love of Bloodsport would be praised if he sat back and enjoyed the little things, like say, Dux rocking a split atop a skyscraper, a lighthearted Jacques Tati-like scene where army officials chase Dux through the streets, or its coiled soft-serve synthesizer score.

On the campaign trail, Trump often entered events to music from 1997’s Air Force One, a movie where the president does away with all of the separations of power and literally defeats terrorists himself.

Most movies are indoctrination. Bill Clinton of the infamous 1994 crime bill claimed one of his favorite movies was High Noon, a Western about a marshall who wants to be peaceful but just can't because he feels responsible for all the baddies; George W. Bush loved Field of Dreams, a dim, signifying baseball movie dipped in nostalgia, enough said; and like Trump, Barack Obama apparently loves The Godfather, a lament for a certain kind of criminality, one that's more decent, respectable – appropriate for 44, who quietly drone-bombed the hell out of many and deported plenty.

Trump is all about bloodsport. His reality shows were bloodsport, the business world he stomped around in is bloodsport, the primaries were all about drawing blood for him, and when he offers up something like teachers becoming Charles Bronsons and arming themselves so they can get into shootouts with school shooters, that's bloodsport. Our reality show president, the totally logical next step after Hollywood actor Reagan – with detours into sub-Kennedy creep Clinton and warmongering dullard Dubya, parts of which Trump also subsumed – eats up the fuck-it-see-how-it-shakes-out pathology of reality TV. 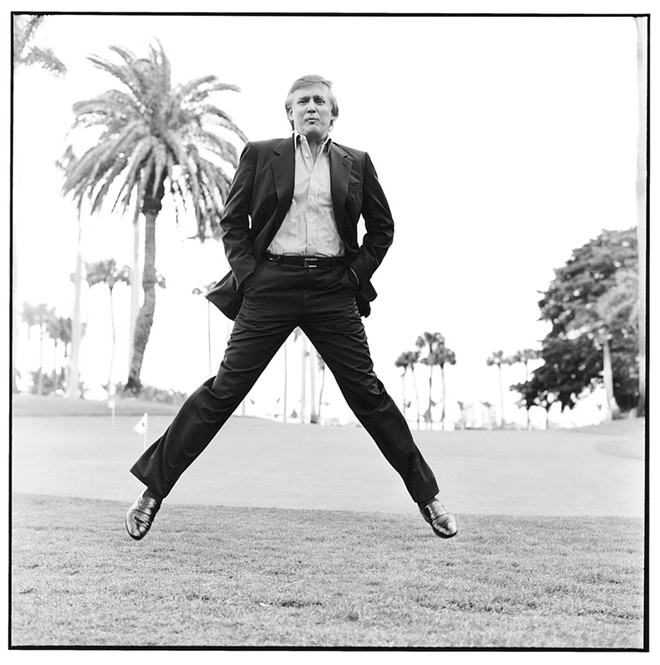 Remember, that New Yorker article said Trump turned off 1996’s Michael, a sentimental snooze starring John Travolta as a schlubby angel, 20 minutes in and put on Bloodsport instead. And as Trump watched Van Damme drop down into a split, stick his fist straight out, and bop his opponent in the junk in slow motion, a unique example of how Trump pops the hood on reality followed.

“You want to write that Donald Trump was loving this ridiculous Jean-Claude Van Damme movie,” Trump said to reporter Singer. “But are you willing to put in there that you were loving it, too?” He dares Singer to embrace Bloodsport and suggests that if he doesn't he's just denying himself a hard truth. This is the typically Trumpian dick-punch: His bullshit detector is strong, though his own propensity for bullshit is unmatched.

“Unfortunately, most thugs and muggers aren’t looking for a fair fight.” –Frank Dux in “Self-Defense Against Knives,” 1980

A shabby epilogue courtesy of TMZ (who else): Van Damme, in 2016, holding a small dog, wearing a hat that says “JCVD” (the name of the first of two meta-action projects he has made where he plays a sundowning version of himself), loose as a goose, reedy, hardly the boyish Frank Dux, pacing around a parking lot, praising The Donald.

“You’re talking about the wrong things in politics. Right now, you need a guy like –” Van Damme told TMZ cameras, then stumbled for a second and reset. “I would say, look, I love my brother Muslim. They love martial arts, I love them. I love everybody on earth. Right now, we need Donald Trump."