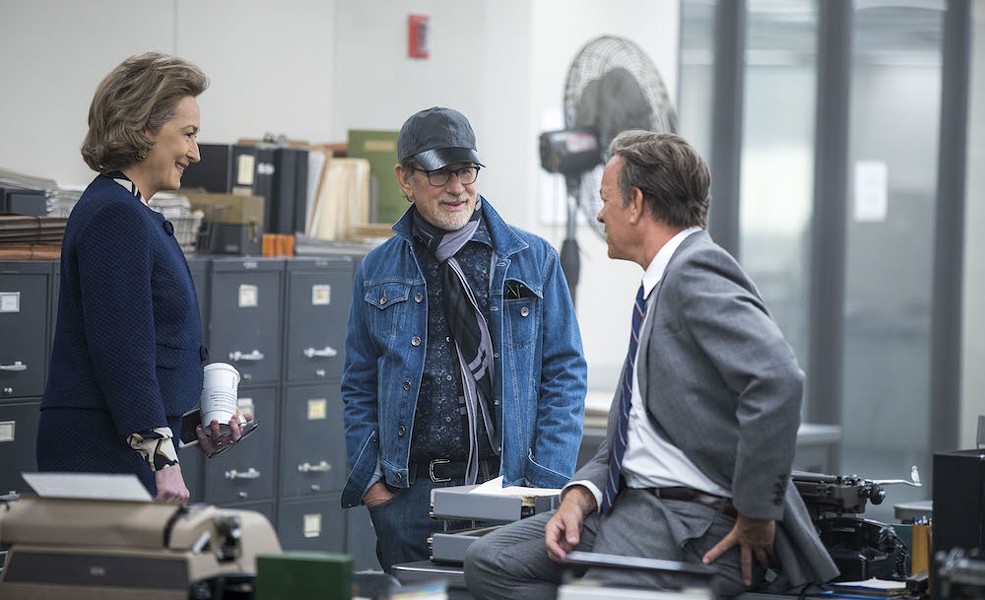 Most Steven Spielberg films begin not by introducing the main characters or diving into the plot but by instead offering a cinematic jolt. Mostly unrelated to the central story, this opening scene teases you into the narrative while establishing tone. Think of the unknown swimmer getting chomped to begin Jaws (and actress Susan Backlinie reprising that intro in 1941), the discovery of the World War II airplanes in Close Encounters of the Third Kind and the opening chase in E.T.: The Extra Terrestrial.

The Post is no different. It starts not in the newsroom of The Washington Post, or by introducing Tom Hanks as executive editor Ben Bradlee and Meryl Streep as publisher Katharine Graham. Instead, it opens in the jungles of Vietnam. But, fittingly, that's where the heart of the movie actually lies.

After all, this is the story of the 1971 publication of the Pentagon Papers: classified documents that reveal how every president from Truman to Nixon lied about Vietnam and, by doing so, unnecessarily precipitated the slaughter of 58,220 Americans.

The film, adhering to its title, focuses on The Washington Post and not The New York Times, which might seem disrespectful considering the latter paper's larger role in the Pentagon Papers' publication. But Spielberg's cinematic decision is the right one thanks to the unique circumstances of the Post, which was often regarded at the time as a local family newspaper.

Still, the Times is not ignored, and the competition between the two papers makes for some delicious "inside baseball" moments, just as it did in Alan Pakula's All the President's Men. (Kudos to writers Liz Hannah and Josh Singer for juggling many characters, as Singer did in Spotlight.)

Speaking of All the President's Men, The Post is the perfect prequel. In many ways, though, it's the antithesis of that earlier film, which concentrated on newbie reporters and the excruciatingly tedious grunt work of investigate journalism.

The Post, conversely, is more about big decisions by big bosses. The intriguing interaction of Bradlee and Graham (the first woman to head a Fortune 500 company) is front and center, while the latter character wasn't even featured in All the President's Men. If she had been, Patricia Neal and Lauren Bacall were the rumored frontrunners for the role, probably because Streep was then just 27 years old.

Now that Streep is the right age, she's wonderful – and better than Hanks, who, though effective, is simply too much like himself (with a sporadic Boston brogue) to make you forget Jason Robards' Oscar-winning turn. Bob Odenkirk (reporter Ben Bagdikian) and Tracy Letts (Post chairman Fritz Beebe) are also noteworthy, and it's fun to watch David Cross tackle managing editor Howard Simons, whom Martin Balsam portrayed back in '76.

The Post differs from Pakula's film stylistically too. While the older movie was grittier, with arguably smarter dialogue and sharper performances, Spielberg's creation is just what you would expect: brilliantly shot, tightly edited, entertaining and insightful, but perhaps a bit too slick. (John Williams' score is good but maybe too prominent.)

The National Board of Review named The Post the best film of 2017, which it isn't. But it is the greatest newspaper movie since All the President's Men, the best film about journalism since 1987's Broadcast News and Spielberg's finest since Saving Private Ryan two decades ago.

Graham tells Bradlee that her husband called newspapers "the first rough draft of history." But The Post is not a rough draft. It is thoughtful, polished craftsmanship by a filmmaker still near the top of his game, and it's more necessary than ever.