The price of popularity 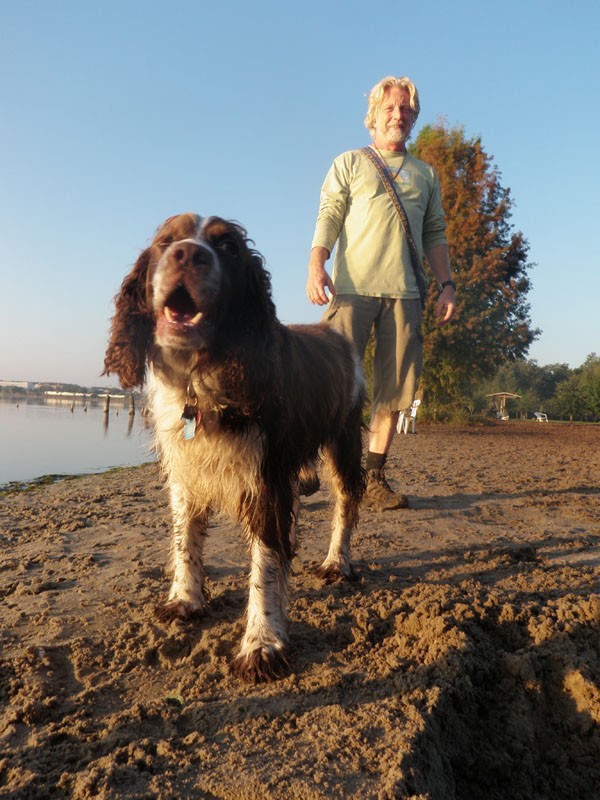 On a recent October morning, Tom Nowicki of Winter Park stands at the edge of the beach at Fleet Peeples Park on Lake Baldwin. The morning sunlight bathes the old oak trees in golden light and burns off the chill in the air. It’s a tranquil scene – one Nowicki takes in every morning, along with his two dogs, Dexter and Mookie.

“It’s a gorgeous park,” he says. “Sometimes we’re kind of stunned that we have it.”

It wasn’t always quite so picturesque here, though. Back in the 1990s, Nowicki recalls, the nearby community of Baldwin Park didn’t even exist. In its place was the Naval Training Center, which was widely believed to have been polluting the lake with chemical runoff until it closed in 1999. The park was sketchier then, a hangout for drug dealers, the homeless and people soliciting sex.

“A dog would go into the weeds and someone would come out with their pants around their ankles,” Nowicki says.

But that changed in 2001, when a collective of dog owners got together and formed the Friends of Fleet Peeples Park. With the City of Winter Park’s blessing, the nonprofit organization fenced in 13 acres of the park in 2003 and invested countless hours of volunteer time improving and cleaning up the area. They made the park one of the most popular dog parks in the city – in fact, in 2006 Dog Fancy magazine named it one of the best dog parks in the country. But on Oct. 11, the Winter Park City Commission made a move that Friends of Fleet Peeples Park say penalizes users for the park’s popularity and puts the future of the nonprofit organization itself in jeopardy.

The Winter Park commissioners voted 3-2 to impose an annual fee of $75 for the first dog a user wants to bring to the park; additional dogs would cost $50 apiece. Beginning Dec. 1, dogs entering the park will need to be wearing tags proving their registration. The city says it plans to put the revenue from the fee back into the park, in the form of maintenance and improvements. But Friends of Fleet Peeples says that over the years since the park has been established, it has been raising funds and volunteer labor to do just that, with minimal help from the city. The Friends raises money by charging members $25 per year to join the organization; membership is voluntary and nonmembers are welcome to use the park as well. The group is concerned that the mandatory fees will make it difficult to convince people to join.

“If fees are going to be charged, you don’t really think we’re going to sit out there with a table and ask for a membership, do you?” asks Carla Lubet, a Friends board member.

Friends secretary Sandy Womble is more blunt in her assessment of the situation: “We will shut down.”

When Friends of Fleet Peeples formed, both the city and its police were grateful the park was being used more constructively, but more than a decade later, feelings have changed. Commissioner Beth Dillaha (Commission Seat 2), who made the motion to impose the fees, says economic realities have outpaced the means of the group. “To rely on a group of volunteers to pay for the annual maintenance and upkeep of a park of that size is a tremendous amount to ask for,” she says. “It costs a lot more money now to maintain that park.”

Parks director John Holland says that costs have indeed risen, though not outside of normal expectations. Holland calculates the “direct” costs of the park at about $18,000 – roughly three tenths of 1 percent of his department’s $7.1 million dollar budget. Fleet Peeples is the only park in the city with a fenced-in area designated for dogs and one of a few in the state with lakefront access. In December, it will become the only public dog park in Central Florida to charge an  admission fee.

Nowicki estimates that the Friends group has put more than $100,000 into the park since the group’s inception. “Nothing has changed on our end, except that we’ve taken better care of the park,” he says. He points out that potentially harmful bacteria levels in Lake Baldwin declined between 2005 and 2008, despite all the dogs swimming in  the lake.

Dillaha won’t go as far to say that the group hasn’t taken good care of the park; rather, her issue with the park as a free space seems to stem from a view that the parks are obligated to the city, not vice versa. “Historically, [Fleet Peeples Park] was rented out for group functions, and picnics; it actually used to generate revenue,” she says. “It wasn’t a lot of revenue, but at least it was in the black.”

The city estimates that fees at Fleet Peeples Park will bring the city $43,000 annually. Confusing the issue, though, is the fact that the city will have to hire staff to enforce the fees. Holland says the city will spend $60,000 to employ two part-time park officials whose primary responsibility will be to make sure that dogs at the off-leash side of Fleet Peeples Park are properly registered and vaccinated.

Even more confusing is the staggering amount of attention Winter Park has given to this issue. The city commission and the parks and recreation commission have been arguably obsessed with Fleet Peeples Park and its Friends – over the past two years, officials on both boards have debated the park’s size, shape, attendance, signage, even its rationale for existence. “We’ve been going through an absolute nightmare,” Womble says. “Every meeting there was a piece of evidence, a reason to close it.”

And it wasn’t just the park that the commission seemed to obsess over, but the dogs themselves. In July, a proposed city pet ordinance tried to ban dogs altogether from three city parks. “At what point do we give this up and talk about something else?” Winter Park Mayor Ken Bradley asked at a city commission meeting at the time.

Members of the Friends nonprofit generally point to three women as the source of their woes: Commissioner Dillaha, parks board member Bonnie Jackson and former parks board member Kim Allen. All three assumed office in 2008, the year to which the Friends members trace their struggle. Jackson could not be reached for comment, and Allen would not speak on the record. Dog owners, however, were much less guarded about their feelings. “I frankly think [Beth Dillaha] is motivated by a pathological hatred of dogs,” says Joseph Brock, a Winter Park attorney and a board member of the Friends nonprofit.

Dillaha calls the charges ridiculous. “I’ve had dogs all my life growing up,” she says. Dillaha has indicated that she’ll be stepping down from the commission in March when elections are held – which is one reason the Friends of Fleet Peeples hasn’t given up  hope just yet.

Sandy Womble says she is “absolutely” looking forward to the day that Dillaha leaves office, when perhaps the spotlight will finally be taken off of dogs. “There are so many more important issues out there,” she says.

The chairman of the Friends, John Fishback, says that in the meantime, he doesn’t encourage a boycott of the park.

Another park regular, Sue Burk, agrees. “We’ll still show up,” she says. “But that doesn’t make it right.”