The Pulse shooting took Juan Pablo Rivera Velázquez’s life, but now his mother and sister carry on his dreams

For about a decade, Angelita Velázquez proudly worked next to her son at their Kissimmee salon as he sat clients in his black styling chair for transformations. She remembers Juan Pablo Rivera Velázquez, 37, would start off by swiveling the chair so their backs were to the mirror as he pulled out his roller brush and blow dryer. Juicy Couture, her son's tiny, tutu-wearing schnauzer, would jump on to the client's lap and cuddle as her owner blended and polished makeup into smoky eyes and a sparkling lip. When the blow dryer turned off, Juicy jumped down and Rivera Velázquez would slowly turn the chair to face the mirror. Sometimes clients would gasp, his mother says, and other times they would cry. She remembers one woman who exclaimed after she saw her reflection, "I didn't know I was beautiful!"

"He was a magician with those hands," Velázquez says wistfully in Spanish. "He was a real artist who treated everyone here like family and gave people confidence. His motto was 'There's no such thing as an ugly woman. Anyone's beauty can be highlighted.'"

And then one night, he was gone. A gunman took his life along with his partner's and 47 others' on June 12 while they were partying at the gay nightclub Pulse.

For months after the massacre, Alta Peluquería D'Magazine Salon remained shuttered and her son's black styling chair remained empty, Velázquez says. She couldn't go inside without thinking of all the happy memories she had created with her son and his partner, and how within a matter of minutes, it was all taken away. Then one day, after much persistence from her daughter Jessica Silva, Velázquez agreed to reopen the south Orlando salon and rename it "D'Magazine by Juan P."

"At first, I didn't want to open the salon because I thought, 'How am I going to do this? He was the artist,'" she says. "But even the clients told me I had to keep going. One day, I woke up and told my daughter, 'Vamos a echar pa' lante.' We have to keep his legacy going."

Originally from Ponce, Puerto Rico, Rivera Velázquez practiced cutting hair and doing highlights on his high school friends before getting his certification as a barber and stylist. Rivera Velázquez and his partner of 14 years, Luis Daniel Conde, moved to Orlando for a better life and opened the salon in 2006. Rivera Velázquez and his mother worked as stylists in the business, while Conde, 39, was its charismatic general manager known for loud and lovable greetings. 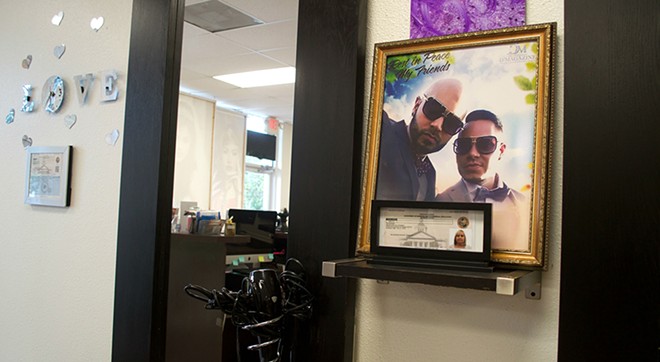 The salon became a sanctuary not only for the women who frequented it, but also for many people in the LGBTQ community. Together, they gained a reputation among local models, beauty queens and drag performers that spread across Central Florida to Puerto Rico. They gave makeovers to cancer patients, and several times, they put on extravagant fashion shows. One of the last things Rivera Velázquez focused on before his death was creating a makeup line he called "Color Face Creation." He used it in his salon, but he wanted to see it on the shelves of Sephora. After his death, Silva and her mother renamed the makeup line "CFC by Juan P" to honor him.

On a December day a few weeks after reopening, former clients streamed into the salon to get a fresh look and remember their friends. Velázquez uses her son's former styling chair, and above her certification, she has placed a framed photo of the couple.

Silva says it's been tough to throw herself into a world she knew little about before her brother's death, but she's quickly learning.

"I couldn't just leave everything he worked for and suffered for," she says through tears. "His dream has become my dream, and until the last day of my life, I will continue to do everything he wanted."

Silva says the holidays have been especially hard because her brother and his partner were known for having a huge Three Kings Day party every year for their clients and friends at the salon. Epiphany falls on Friday, Jan. 6, this year, and people have asked her to hold the party, but Silva says it's too soon, though she thinks she'll be ready to throw one next year. She adds that she wants the salon to remain a safe space for LGBTQ people, a place where they know they are loved.

"Love is love," she says. "Juan and Conde have a love that can't be compared. Who are we to tell them they can't love each other? In my family, our love was unconditional, and it's the same in the salon. There's no divisions here; we're all eating from the same plate with the same knife."

Velázquez says she's able to smile, but her son's death still hurts her profoundly. Juicy lives with her now, and Velázquez says the dog associates the sound of the blow dryer with her son – as soon as she turns it on, Juicy will come running into the bathroom.

"I can't forget my Juan," she says. "As a parent, you always think you'll die first, not them. He was a professional and an extraordinary human being with a heart of gold. They were both wonderful people. I need them so much, but little by little, we're getting by."