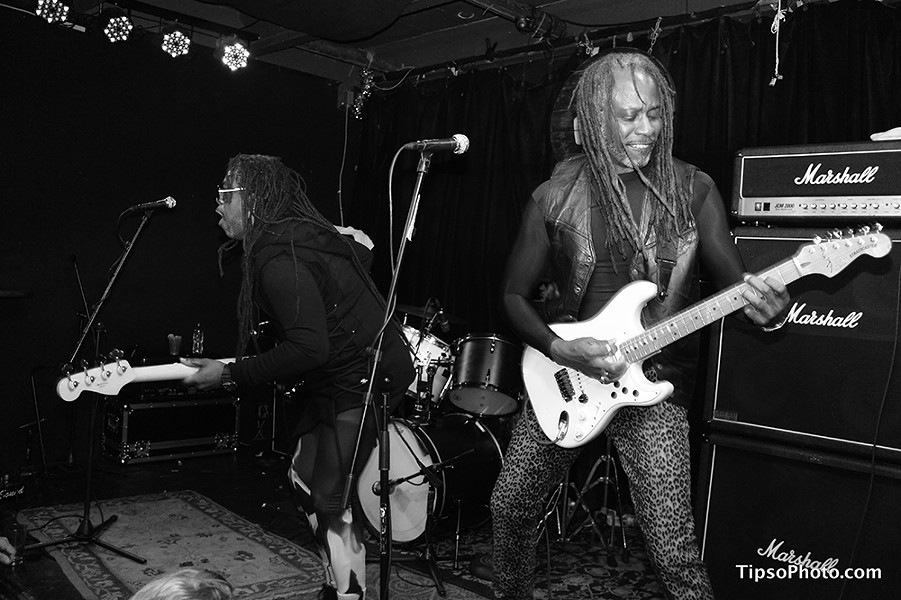 Typically, the Grammys are of little concern to me. But, man, class act, that Adele. Your mom was right about her.

Over the years, there have been some nice instances of important but overlooked bands finally getting their due. But few are as righteous as Death (Feb. 13, Will's Pub), who have become perhaps one of the greatest history-righting rock stories of all time. Emerging from the Detroit underground that was coursing with the blood of the Stooges and the MC5, these three pioneering brothers, by dint of both their place and race, should've been etched in the seminal and absolutely essential proto-punk chapter in the history books. Instead, their stars were crossed, and despite some major-label interest, they went nowhere and folded in 1977 right before punk erupted and changed the world. But these guys were doing it way before Bad Brains.

Fortunately, their place in the music canon has now been restored, thanks primarily to excellent indie label Drag City, who brought the band from footnote to headline in 2009 by finally giving a proper release to their 1970s recordings. Death has since reunited (minus the late David Hackney), gotten the documentary treatment (2012's A Band Called Death) and released new music (2015's N.E.W.).

After an unlikely climb from an abyss of memory and time, they finally made their Florida debut. Like most of the world, I never saw Death's original lineup with band visionary David Hackney, who died nearly a decade before they reformed. In his stead was guitarist Bobbie Duncan – a bandmate of the other two Hackney brothers (Bobby and Dannis) in reggae project Lambsbread – who laid down the licks respectably. The rhythm section of Bobby and Dannis, however, was O.G. With them leading the charge, the pulse of Death is still alive with all its economy, kick and clarity. Right there, in that room, it was vintage Detroit brought back to miraculous life.

The show was a monumental opportunity to see not just living history but history reclaimed. For underground music heads, it almost doesn't get any more significant than this. Fortunately, there are a lot of us in Orlando, enough to pack the room with respect, raptness and full appreciation of the momentousness of the occasion.

But the vibes coming off the stage were just as beautiful. The players beamed with the joy and gratitude of guys who've been granted a second, even bigger, lease on artistic life and are taking a victory lap they probably never thought they'd see.

Thankfully, black punk isn't such a unicorn nowadays, as the great annual Afropunk Festival attests. But it's not been historically common. And back in 1973, it was practically revolutionary. Had that bit of history on Death been duly recognized all along, think about how much more interesting and forward punk would be now. Luckily, a more chromatic new era is on the rise, and Death can be counted in it as both a reinstated historical cornerstone and a living part. Sometimes the cosmos is just, if a little late.

Indie folk band Jamestown Revival, who just made their Orlando debut (Feb. 16, the Social), are part of the class of young folk gentry steering the genre toward wider, more pop-oriented horizons. No question, this is polished stuff. But it's not as twee as their contemporaries the Avett Brothers, the Lumineers, et al. They fuse country, soul and blues with a big rock wingspan. What's more, there's some of that good Texas swagger in their sound. And that's awfully tough to deny.

Sharing the marquee was Los Angeles band the Record Company. The blues-rock trio has similarly glossy and centrist propensities, though they tend to lean on genre tropes. This ain't no Black Keys here. But, luckily, they, too, delivered with thump and gusto on rubber-burning jams and decently greasy slide action.

All of it was spirited, devout and professional. And even though it's done by young guys, it's something even your parents could get down to, which is telling. Judging from the crowd makeup, odds are more than reasonable that I saw your dad at the show.