The Sabal Trail pipeline is a 'done deal,' and now Central Floridians begin to realize what’s about to come through their backyards 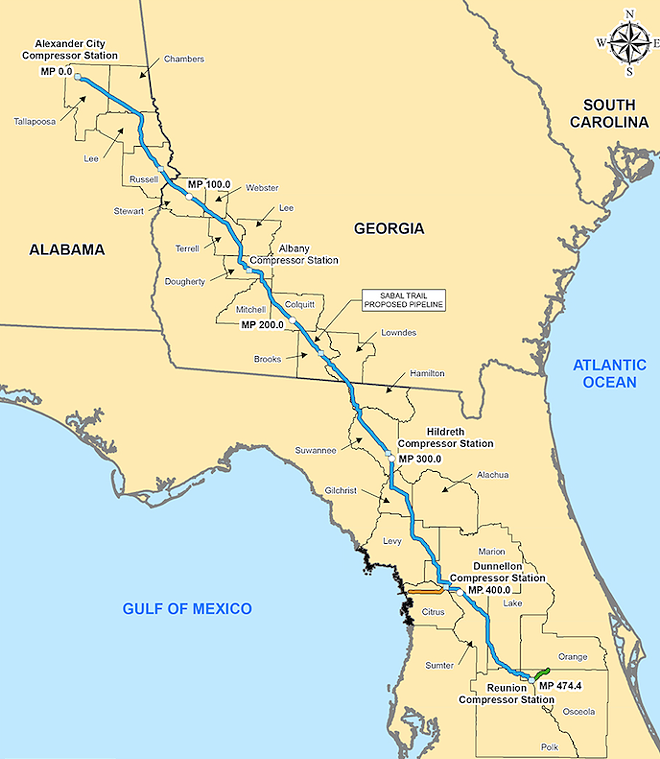 Aside from explosions, environmentalists like John Quarterman, the Suwannee Riverkeeper, are concerned about sinkholes that could be provoked by drilling into the karst topography filled with underground caverns and streams. Back in November, Quarterman and his group found drilling mud from the Sabal Trail pipeline leaking into Georgia's part of the Withlacoochee River. In a statement released at the time, a spokesperson for Sabal Trail said "there was never any danger to human health or safety, and no harm to the environment." The company did acknowledge the discharge was a mixture of bentonite clay and water, which Quarterman says can deplete the oxygen in the water. He's more concerned other discharges could upset the delicate system in the Floridan aquifer, ultimately affecting the drinking water.

The EPA seemed to think so as well, at least at some point. In a 30-page letter delivered to FERC in 2015, Chris Militscher of the EPA's National Environmental Policy Act Program Office wrote that the EPA has "very significant concerns" about how the Sabal Trail pipeline could threaten the Floridan aquifer and directly impact 1,255 acres of wetlands and the sensitive Green Swamp in Florida.

"The proposed pipeline is expected by the EPA to have significant impacts to karst areas in the State of Georgia and Florida and represents a potential threat to groundwater (and surface waters) resources," Militscher wrote. "The EPA is requesting that the FERC develop an alternative route to avoid impacts to the Floridan Aquifer and its sensitive and vulnerable karst terrain."

During a lawsuit brought by WWALS Watershed Coalition to stop the Florida Department of Environmental Protection from issuing Sabal Trail an environmental resources permit, the state agency joined the company in blocking the EPA report from being submitted to the court. Florida Bulldog, an online media organization, reports Gov. Rick Scott has made several investments in energy companies, including $53,000 in Spectra Energy stock in a blind trust in 2013. That same year, he signed two bills to speed up permitting for Sabal Trail, and his five appointees on the Florida Public Service Commission gave it unanimous approval to be the state's third major natural gas pipeline, according to Florida Bulldog.

Two months after the initial letter from the EPA, the federal agency reversed course in another letter, this time from the EPA's James D. Giattina to the Army Corps of Engineers. He brought the 1,255 acres impacted down to 882, with 235 acres of wetlands permanently affected.

"The EPA believes the applicants have chosen a path that avoids many of the most sensitive areas and demonstrates the karst areas in the path of the pipeline are unlikely to be significantly affected," Giattina writes.

Representatives for the project say the current natural gas pipeline infrastructure in Florida isn't enough to meet increased demands for natural gas, though Quarterman points out FPL's 10-year plan published last September says the state doesn't need a new electricity resource until 2024. Mark Woodall, legislative chair for the Georgia chapter of the Sierra Club, says he believes FPL and Duke's need for natural gas comes from their refusal to look at other energy alternatives, like solar. Last year, Florida's major utility companies were behind Amendment 1, a solar-energy ballot initiative that critics said was "deceptive" and would have limited rooftop solar expansion.

"But it's not the end until the pipe is laid," Quarterman says. "Investors could still pull out and the whole thing would fall apart. This fight isn't over yet."

Rogers says he continues to fight to "finish the drill" and hope for future FERC reform.

"It doesn't matter if you're losing because you're playing to win your reputation and to live to fight another day," he says. "The pathway to victory is exceedingly narrow, but we're not quitters. It's not over until it's over."

Spectra is taking the final steps in Florida before it turns on the pipeline this June, though environmental advocates and an Orlando eminent domain lawyer are putting up some roadblocks.