The Vans Warped Tour at 18: Class of 2012 yearbook predictions

As the Vans Warped Tour hits town to celebrate its maturity into adulthood, we present some Class of 2012 yearbook predictions 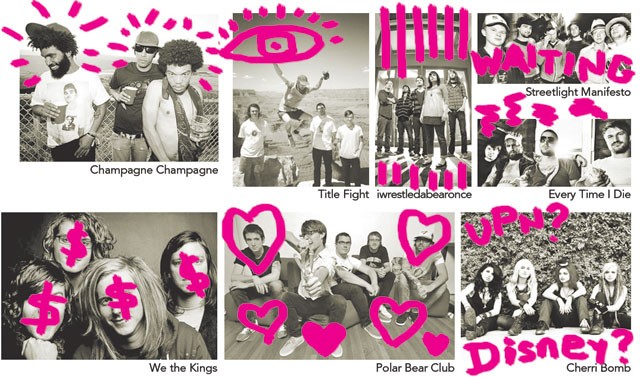 It's like summer school for music geeks, boasting a vibrant mix of established and younger underground acts. While punk's always been Warped Tour's bread and butter, the festival's so rich in different, new and up-and-coming acts, it's as worthwhile for what you discover as for what you came to see. Of course, that's only natural when there are 10 stages and more than 75 artists. While most know mainstage draws like Taking Back Sunday, Yellowcard, All Time Low and New Found Glory, there are plenty of other acts attempting to push their way into your consciousness. Here's a yearbook superlatives breakdown of some noteworthy bands.

… Be Pulled Over Naked: iwrestledabearonce
They're not degenerates (I think), just wildly unpredictable. This kitchen-sink electro-prog-metal combo employs neck-snapping twists in tempo and tone like the Dillinger Escape Plan but with the explosive psychedelic experimentation of An Albatross. It's noisy, growling, frequently brutal music lined with odd textures, sputtering samples and bursts of melody.

… Be Referred to as Hipst'oppers in a Snarky Blog: Champagne Champagne
This Seattle punk-rap trio's DJ is Mark Gadjahar (Past Lives, the Blood Brothers), who fashions a sinewy backdrop with echoes of post- and dance-punk. Emcees Pearl Dragon and Sir Thomas Gray's rhymes shuffle along to a bladed, low-riding West Coast groove riffing pop icons like Jennifer's Body, Bart Simpson and "Soda and Pop Rocks."

… Appear in a Teen TV Drama:Cherri Bomb
You want to dismiss these all-girl teenage Runaways wannabes as a predictable label gambit more about makeup than music. Last year's debut EP Stark was thin gruel, but May's This Is the End of Control proves a vast improvement (more hooks, better songs). Their post-grunge hard rock touches on metal and modern rock with admirable swagger, though it's still overly polished.

… Be Mentioned in the Same Breath as Axl Rose: Streetlight Manifesto
These anthemic New Jersey ska-punks have released but two albums of original material in 10 years: one is a cover of an entire album originally recorded by Streetlight's impassioned vocalist Tomas Kalnoky's old band, Catch 22, and the other is a covers disc – their The Spaghetti Incident? Kalnoky's heady lyrics are backed by energetic arrangements that corner like a 'vette. Five years in now, we should only have to wait 10 more for their Chinese Democracy.

… Leave the Workout Bench Sweaty: Every Time I Die
Calling Every Time I Die metalcore's finest act sounds like damning with faint praise, but there's no discounting their power and idiosyncrasy in a paint-by-numbers genre. More than simple feral howling and breakdowns, their menacing, unsteady gait is burnished with gritty gunmetal-gray gleam that balances spastic bursts of chaos and indomitable churn.

… Come Away With New Adherents: Polar Bear Club
Blending the lessons of hardcore, pop-punk and emo, each of their three albums displayed dramatic improvement over the last. This Rochester, New York, quintet mixes melody and crunch-laden heft as well as anyone on Warped. Last year's catchy, passionate Clash Battle Guilt Pride would've topped the charts on a bigger label.

… Have People Lie Years Later About Having Seen Them: Title Fight
It's taken a decade for these PA post-core kids to get their feet under them, releasing their full-length debut Shed last year on SideOneDummy. But the timing couldn't be better for music evoking the post-punk of Quicksand and Jawbox. They're tremendously tight, and the songs feel impeccably crafted. Few know them now, but that won't last.

… Appear in the Next FreeCreditReport.com Commercial: We the Kings
They could take it as a compliment. The Bradenton bunch write songs that bum rush your brain and leave you still humming the tune days later. If you're partial to smirking, irrepressibly infectious music whose boy-meets-girl message can be summarized in under 30 seconds, this is your band.