To open yet another Asian restaurant in a space that's seen a revolving door of Asian restaurants might seem pretty ballsy, but the chaps behind Viet-Nomz – Chris Chen, Mike Cho and Philip Nguyen – saw it as an opportunity to bring fast-casual, pan-Asian cuisine of the new order to the food-conscious folks in 32792. The term "fast casual" is of great import here. Like the menu of noodle bowls, bao and tacos (not to mention the woodsy interior illuminated by Edison bulbs), it's precisely on trend – a quality that predecessors Thaitanic Sushi, Yum Yum Thai & Sushi and Besuto Sushi failed to embrace.

And while the food at Viet-Nomz may not reach the level of Mills 50's more seasoned and established outfits, try telling that to the millennials and steady stream of young'uns from UCF and Full Sail who see the joint as a bastion of affordable sustenance. The "Hangover Cure," for example – pho with a vegetarian broth ($10) – certainly speaks to the crapulence of collegians, of which there was no shortage in the restaurant on one particular Friday night. The eatery was so mobbed, in fact, that it had us doubling back. 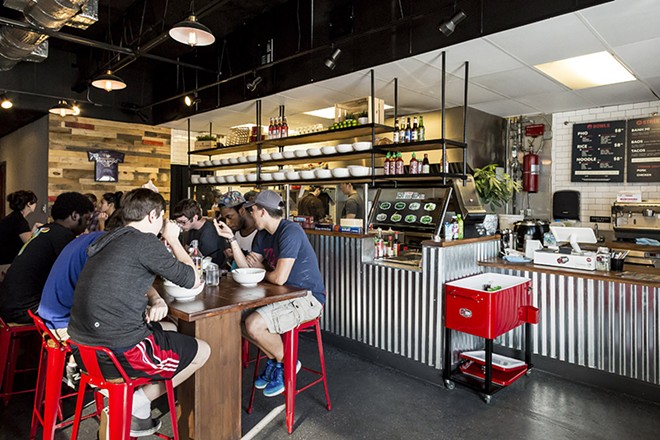 So it was on a less-crowded Monday that we nibbled on fried spring rolls ($3) tightly packed with ground pork, rice noodles and shredded vegetables, but only after the initial batch, blackened from a thorough overfry, was sent back. Then it was on to serviceable beef and pork bao ($6.50 for two) comprising a nice pickle-y crunch. Bao, like most items served at Viet-Nomz, can be had with your choice of pork, steak, chicken or crispy tofu. We gave the latter a go in a rice bowl ($8.50) with pickled vegetables and a side of fish sauce. As simple and as satisfying the dish was, the kitchen felt the need to plonk an unadvertised fried egg – the trendy calling card of many a chef nowadays – on top. Did it look pretty? Sure. Did I want it? Not really. Besides, there was enough protein in the rapidly cooling "king pho" bowl ($12) to build another layer of flabby muscle around my one-pack abs. Its heady beef broth, made beefier with meatballs, eye round and brisket, in an oversized bowl no less, made an undoubtable impression.

So did the herb bar. Now, I'm not opposed to the idea of gathering my pho garnishes myself, but when I did so the first time, the options under the sneeze guard looked sad: wilted Thai basil and cilantro; dried-out jalapeños and sprouts; and less-than-fresh onions. When I went back mid-bowl, they seemed garden-fresh. Timing – it really is everything, I suppose.

Anytime's a good time for a banh mi ($5.50), though. I mean, who can say no to a banh mi, right? "You should get it with a fried egg," insisted the girl with the toothy smile who took our order. "Tempting, but no," was our reply. The sandwich, with its flaky-crusted, soft-centered baguette, was easily one we'd order again (without the fried egg, thanks).

"Banh ice" ($3.75), described as a "Vietnamese ice cream sandwich," was unavailable, as it was still being "perfected." No matter, I was looking forward to ending with a hot cup of Vietnamese coffee ($3.50 small; $4.50 large) anyway, but the cà phê here is made using an espresso machine, not the tried-and-true method of a stainless steel infuser. Then came the bad news: The espresso machine wasn't working. Pity, I thought. In this push to cuddle up to the postmodern #foodie, there's still something to be said for doing things the old-fashioned way.