Timing is an elusive variable that can make or break a business. In the case of Sixty Vines, the wine country-inspired restaurant appeared to have a real feel for the intangible, accomplishing the rare feat (in this town, anyway) of opening when it said it would. Just watching construction crews slap on an enclosed wine garden patio to the restaurant space in seemingly no time at all was nothing short of impressive. Money talks, I suppose, and the Texas-based Front Burner Restaurant Group, which runs Sixty Vines along with a host of other concepts, has a lot of it. But soon after the restaurant welcomed guests into its bright airy space, it was met with an unexpected and unwanted visitor. You-know-what spoiled the party a week or so after the NoCal-style boîte opened, and timing proved elusive once again. Front Burner shut off the dining rooms of all its concepts and furloughs and layoffs followed.

Sixty Vines resorted to selling meal kits and toilet paper – not exactly the sort of introduction the restaurant with its 60 wines on tap had envisioned for Winter Park, that's for damn sure. But a limited menu allowed folks to become acquainted with the restaurant's food and drink through (what else?) takeout. For me it was during Earth Week, when they just so happened to be giving away a free bottle of wine with the purchase of two entrees as a promotion. (The wine is tapped from environmentally friendly kegs and poured into reusable glass bottles.) 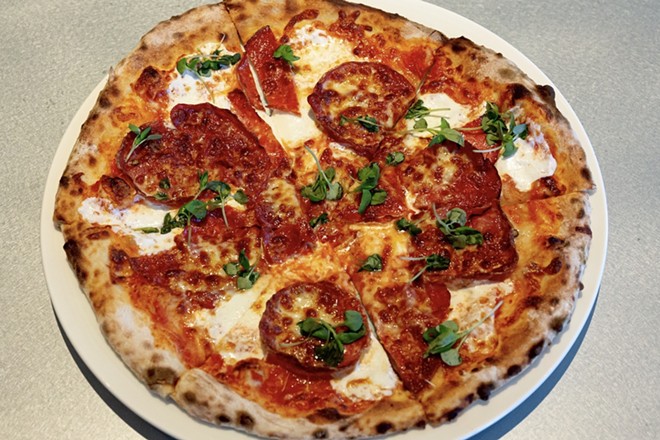 So, along with the Rodney Strong Upshot red blend, we savored bites of a flawless and garlicky orecchiette primavera ($13) with bits of asparagus, celery, zucchini, carrots and tomato all tossed in a pesto butter and pecorino romano. It was absolutely lovely, as was our second entrée, a lemon-roasted half-chicken with an oregano-chive rub served with roasted potatoes. Both dishes – simple, rustic, clean, healthy(ish) – put us in a Sonoma state of mind in our living room.

A few months back, I heard (through the grapevine, naturally) that Larry Sinibaldi was to be the executive chef of Sixty Vines. It's a familiar name – Sinibaldi and Bernard Carmouche ran both Muddy Waters in Thornton Park and Two Chefs Seafood Oyster Bar in NoDo before that.

Southern food this is not, but Sinibaldi is clearly in his element, I thought to myself as I knifed through burrata ($15) and charred Campari tomatoes served atop grilled ciabatta. That mouthful was followed by a pop of oven-roasted dates wrapped in bacon ($6) followed by more burrata and reveries of hot air balloon rides, Chez Panisse and Cali-style pizza. And while there are better pies to be had in town, you'd do well to pair SV's fig and prosciutto pie ($17), or a trusty margherita ($14), with a Sabine rosé. 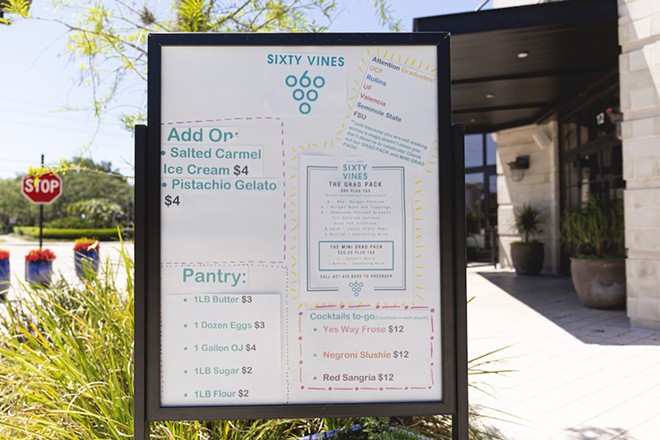 While I waited curbside for my order, a sign near the waiting area listed additional items they had for sale. So I picked up some eggs, sugar and flour, along with a pint of pistachio gelato ($4), which came in handy. But they forgot the olive oil cake ($8) we ordered for dessert. When I called to inquire, I was told it was waiting on the to-go counter inside the restaurant.

I know. These are stressful times for restaurant workers, and the last thing they need is some wanker complaining about not getting some cake. So, I'm sorry. I truly am. I really didn't mean to dine and whine.