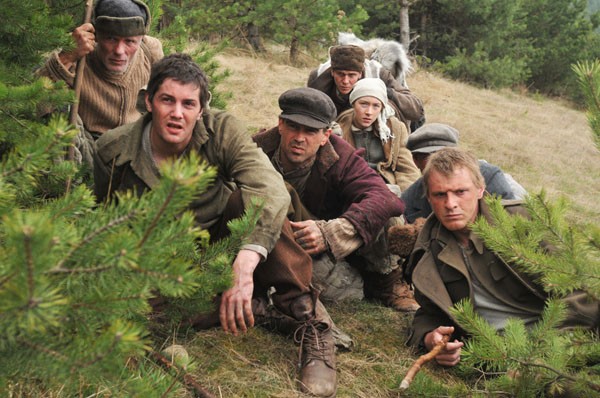 Peter Weir’s The Way Back – his first film since 2003’s Master and Commander: The Far Side of the World – is cause enough to dust off that old chestnut about how Hollywood doesn’t make ’em like they used to. It’s an admirable and sweeping epic about a feat of human survival once thought factual, and the story is no less harrowing now that those facts have been called into question. (More on that later.)

1940: Janusz (Jim Sturgess) refuses to validate accusations of espionage by the Soviets who have captured him, but his wife is violently coerced into calling him out as a spy, and he is soon sent off to a Siberian gulag where the surrounding wilderness is the real prison. Khabarov (Mark Strong), a fellow prisoner and former actor, shares an escape plan, while stoic American Mr. Smith (Ed Harris) informs Janusz that Khabarov’s all talk and no action, and has been for quite some time.

Janusz is determined to return to his wife, though. With the help of Mr. Smith, Russian thug Valka (Colin Farrell), a priest, an accountant and a sketch artist, they walk into a bar – just kidding. Actually, they make a break for it, seven in total, hardly prepared for the hardships that await them on the long walk from Siberia into Mongolia and beyond.

The screenplay by Weir and Keith Clarke claims to have been inspired by Slawomir Rawicz’s bestselling memoir, which has since been debunked as not entirely true. (A BBC documentarian believes there is evidence to suggest the journey happened and that Rawicz stole a different prisoner’s factual escape story.) That hasn’t prevented Weir and longtime cinematographer Russell Boyd from fully conveying the scope and severity of the journey, fictional though it might be. Shooting on location in Morocco, Bulgaria and India helps render the environments in equally gorgeous and grueling fashion, with little apparent digital interference; Burkhard Dallwitz’s score complements the adventure well, gracefully shifting between ominous themes and more elegiac ones.

In any other movie, the detached but determined Mr. Smith would be our hero, and Harris certainly fits the bill; he’s sympathetic to his fellow trekkers without ever cracking so much as a smile. Instead, Janusz remains the focus here, and Sturgess (21) delivers a quietly capable performance as an unlikely leader driven as much by his will to survive and support the others as he is by his goal to forgive a wife who may never forgive herself.

Farrell offers the closest thing to comic relief as an illiterate criminal whose knife happens to come in handy and whose loyalty is never quite set in stone. The all-male ranks are interrupted by the arrival of Saoirse Ronan as Irena, a Polish runaway with a knack for bending the truth, and who nonetheless gets under the skin of even the hardest POW. (For those of you keeping count, there are some admittedly underdeveloped characters played by  perfectly good actors who, in spite of their talents, run together in a blur of beards and accents until they drop off after a snowstorm  or sandstorm.)

None of it is as cloying as it sounds; Weir champions the human spirit without getting too sentimental for his own good. What’s more, he has an eye for a classic sense of adventure all but absent from modern filmmaking. See The Way Back on the biggest screen you can, get caught up in it and be sure to bring plenty of water. That Gobi desert’s  a dry one.