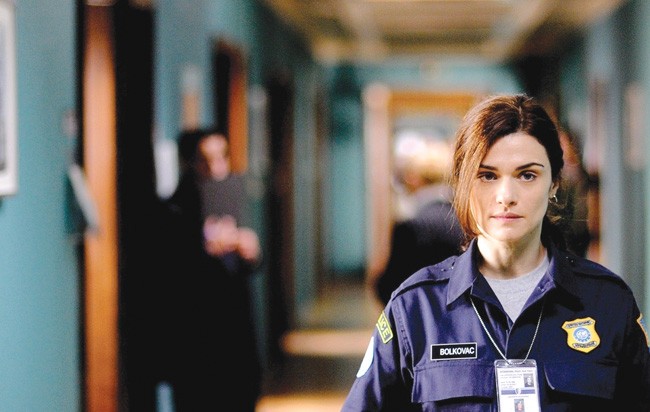 The term “whistleblower” generally conjures the image of a white-collar guy turned state’s evidence to blow the lid off of some form of corporate malfeasance. But in Larysa Kondracki’s film, based on the true story of sex trafficking in war-torn Bosnia, it takes on an entirely different meaning.

Rachel Weisz plays Kathryn Bolkovac, an American cop who joins a civilian police force to help keep the peace in post-war Sarajevo, capital of Bosnia-Herzegovina. Because of her devotion to her job, the film tells us, Kathryn loses custody of her child in a divorce and is moving the remnants of her family to Georgia. Denied a transfer to another department, she’s desperate for cash. Soon, she’s told of an opportunity to earn $200,000 for a six-month tour; it’s too good to pass up.

Upon arriving in Sarajevo, however, she immediately finds herself unprepared for the day-to-day realities of policing a recovering war zone. Like the rest of her civilian troop, Kathryn is uninformed about local politics and the racial and religious strife that still rules the neighborhoods they patrol. She finds few friends, save Nick (Benedict Cumberbatch), a good-guy member of the Dutch unit who is dealing with similar domestic issues back home.

Beyond the regional state of affairs, she’s equally ill-prepared for the internal politics at Democra, the multibillion-dollar private security company she now works for. (The company’s real-life model, DynCorp, has been a target of WikiLeaks.) Bars around the Democra base camp are filled with trafficked sex slaves from Eastern Europe, and, more often than not, it’s the Democra workers who pay for their services.

Don’t let the impressive cast list, which includes Vanessa Redgrave, Monica Bellucci and David Strathairn, fool you: This is the Rachel Weisz show. Weisz is given almost every important scene, and she comes through mostly unscathed. Tough and outwardly guarded, her Kathryn is beaten down by the horrors she comes to find, and Weisz’s empathetic vulnerability is nicely understated. This job could kill her, both emotionally and physically, and she conveys that with a subtlety that’s nudged along from time to time by Strathairn’s Internal Affairs chief. Weisz’s dominance too often gets in the way of the story’s flow, drifting too far off into self-important territory that first-time director Kondracki seems unable to navigate.

As Kathryn peels back the layers of the trafficking cases she investigates, they invariably lead back to American corruption of the local authorities, who flex their strength in this largely ungoverned part of the world much like the mafia did in the 1930s – you talk, you die. In the end, we’re left with a helpless twinge in our gut that won’t go away because these companies still operate in our country’s name to this day.