There’s beautiful food to be had at Florida & Co. 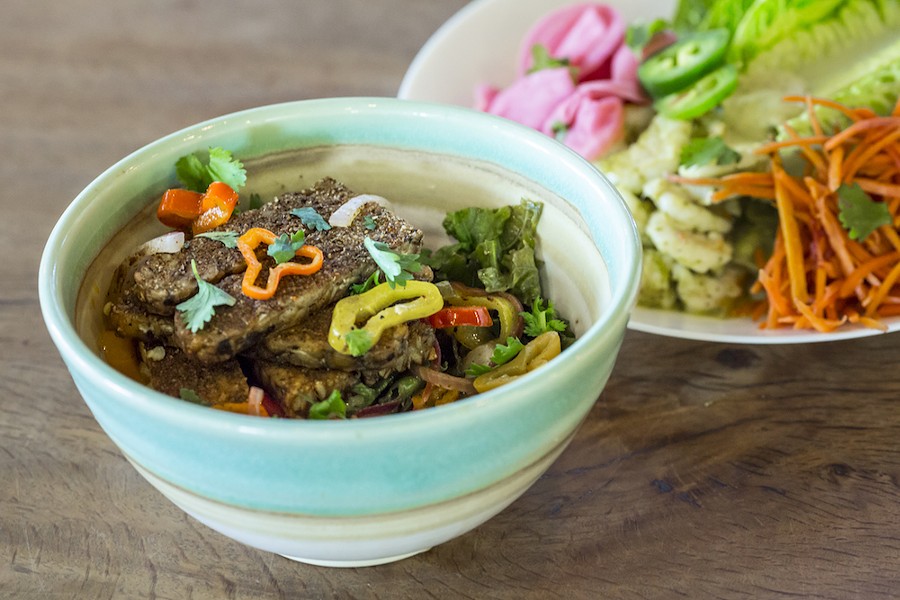 It's no secret we love Emily Rankin. We even said so in last year's "People We Love" issue. We were smitten when she started the Audubon Park Farmers Market a decade ago, then fell hard when she helped bring local meats and produce to area restaurants via her distribution company, Local Roots. Now we're in full swoon over Florida & Co., her East End Market restaurant stall so, yeah, we're in deep.

There's a communal bar where most patrons gather, along with a few tables fronting coolers and shelves stocked with the foodstuffs of the Sunshine State. The relationships she's built with farmers, producers and purveyors certainly helped Rankin forge a superb seasonal menu comprising all those Florida-grown and raised ingredients. The edible arrangements she serves here – fresh, colorful and vibrant – are absolute pictures of health (as well as great fodder for our smartphone cameras).

The red snapper ceviche ($14) was no poseur, though we had issues with the bowl's aspect ratio. A little more width would've prevented the constant spillage of the rousing bricolage onto thick wedges of plantain chips. Still, that small vessel yielded big flavor, and those chips – salty and faintly sweet – were downright addictive.

Even more photogenic, especially as it sat on the live-edge wood bar, was the cilantro-lemongrass bowl ($14) packed with plump Florida white shrimp, salad greens, pickled radishes and wonderfully soft brown rice. We added a soft-boiled egg for $2 more (because food aesthetes like eggs on everything).

Now, the bowl of stone-ground grits, garlic kale and pulled heritage pork was no looker, no matter how we adjusted the positioning of the bowl, the angle of the shot or the intensity of the light. There's a hideous barbecue sauce fashioned from datil peppers and kumquats smothering the pork – but it just so happens to be bloody delicious. Along with perfectly cooked grits and kale, it lent great beauty to this bowl of ugliness, and my inner William Eggleston concurred. A garlicky meatball sandwich ($14), on the other hand, bordered on the mundane, perhaps because the grass-fed orbs disintegrated under the weight of mozzarella, tomato sauce and pecan pesto. What can I say? I like my meatballs firm, and these turned into a pseudo-mince rather quickly.

With eight different Florida beers available on tap, tipplers sidle up to the bar at all hours of the day for a pint or two, and some can even be seen "enjoying" a glass of kombucha, though I find that very hard to believe. (Editor's note: Believe it.) There are wines on tap as well, but if you're looking for a sugary end – or start – just know that desserts aren't offered by Florida & Co. Yeah, I know I could do an about-face and head to Gideon's for a boffo cookie or Olde Hearth for a chocolate croissant, but they close early. If I'm here until 9 p.m. on a weeknight, I'm out of luck and, besides, I want to see what Rankin and her merry band of cooks can do on the sweet side. I won't lie – leaving without getting our sugary fix was a slight disappointment, but that's OK. Every loving relationship has its ups and downs.