There’s nothing else quite like the Republic, an innovative new interactive entertainment 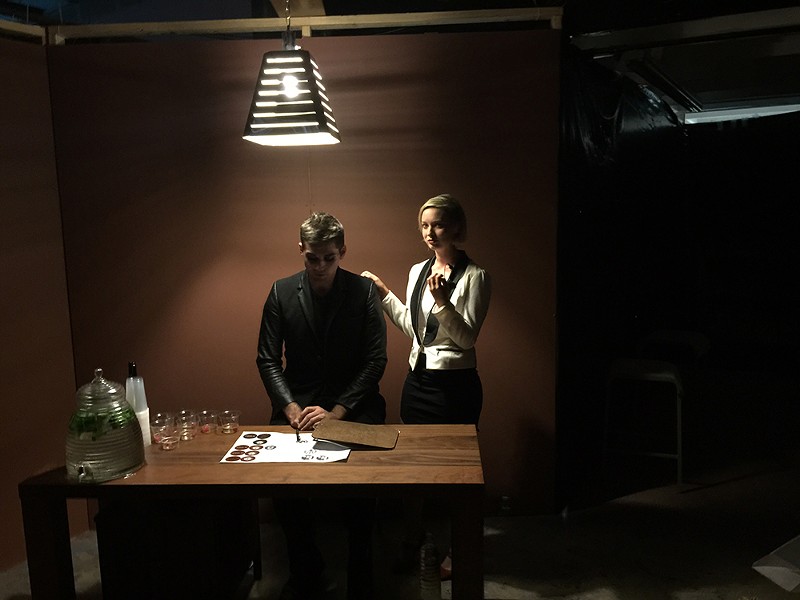 It all began with the blindfold. A ribbon of cloth was tied across my face, and I was led stumbling into the blackness with only the shifting textures beneath my feet – from tile to cement to dirt and sticks – signifying my sightless progress. Finally, I was forced to sit on a low stool and a gruff voice grunted warnings in my ears until the blind was removed, revealing the hideously disfigured visage of my monstrous host. As he ranted about pain and control, I ransacked the gloomy room, rummaging through ornate boxes in search of an instrument to tranquilize him with.

No, this isn't a preview of Disney's new Fifty Shades of Grey ride; nor is it a training camp for Halloween Horror Nights scare-actors. Welcome to The Republic (therepublicgame.com), an innovative new interactive entertainment that opened in downtown Orlando's Ivanhoe Village neighborhood late last month. The Republic casts up to 30 players per session as cogs in a complex sci-fi society inspired by Plato's politics, Greek mythology and Fritz Lang's Metropolis. Once assigned their roles, guests get 90 minutes to explore 18,000 square feet of elaborately themed sets and interact with a dozen-odd live actors. Depending on the questions players ask and decisions they make, the Republic might witness a bloodless revolution – or the whole thing might get blown to hell.

After experiencing the attraction twice (once during their Fringe Festival "beta test" and again at their media grand opening), I can confidently say that there's nothing else quite like the Republic in Orlando's tourism market, nor maybe any other. I've enjoyed most of the local "escape rooms" that have proliferated lately, but those are more like old-school point-and-click puzzle games, whereas the Republic is closer to a live-action open-world RPG. Creator Sarah Elger (who is a designer for a local theme park by day) credits World of Warcraft as an important influence, and told me that her desire to "create a real-life video game experience" has taught her that "empowering an audience member is terrifying" from the gamemaker's perspective.

Likewise, comparisons can be drawn to immersive plays like Tamara or Sleep No More, but those are passive experiences in which the audience members are observers, while the Republic relies on participants to make decisions that drive the action forward. There are no hit points or dice rolls in this game; your weapons are your wits and information is the only currency. You can choose to follow the character you are initially paired with and play your assigned role, but I had more fun deviating from the obvious path, making my own decisions about who to trust or deceive.

This type of interactive theater relies on talented improvisers to make it work, and for the most part the Republic's cast acquits itself honorably. I recognized a number of familiar faces from area stages – including Corey Volence, Clare Ghezzi, Spencer Hojdila, Michael Sloan and John Reid Adams – and all did an excellent job of "yes, and"-ing my suggestions. A couple of the characterizations (such as the Engineer who was channeling Randy "Macho Man" Savage for some unknown reason) crossed into distracting camp, but most maintained the appropriate balance between sinister and surreal. Even when I deliberately disobeyed instructions or otherwise tried to push the game's boundaries, they all stayed in character and adjusted agilely. I was especially impressed by Kathryn Fabbroni's performance as the shellshocked CEO after I rescued her from a cave full of jellybeans (you had to be there).

As with any enterprise this ambitious, there's bound to be room for improvement, and while I noted welcome tweaks between my two visits, it still has a way to go. Most crucially, full enjoyment of the attraction requires understanding the complex caste system writer Nikhil Menezes has crafted, which results in overly expository opening scenes; imagine if the dungeon master had to explain what elves and dragons were before every game of D&D. I'd suggest sharing the backstory online for pre-game prep and screening a "propaganda film" explaining the essentials during the wait for everyone to check in (a process that currently takes way too long).

Fair warning: The Republic isn't for the faint-hearted; there's foul language from the first scene, and at one point I watched someone run screaming from a rampaging actor. During the game itself, some tasks I completed had no consequences, and both times we were summoned to the finale just as I felt I was starting to accomplish my objectives. Finally, neither of the scripted endings I saw (I've heard there are four possible conclusions) was particularly satisfying; the "murder cabinet" used to kill characters is especially awkward and anti-climactic.

Even with these issues, I became really involved in my Republic experiences, and wished they had been 20 minutes longer. The question is what will become of this grand experiment once its limited nine-week run ends in late July, as construction for the Yard at Ivanhoe consumes the Republic's Alden Road warehouse. Hopefully Elger and company can find a new permanent home for it, because I'd love to see their concept refined to a quality that can compete with other area attractions.