These Orlando arts shows gave us life in 2017

The year of our oh-lord-what-now

Living through 2017 was like riding a rusty merry-go-round: It's spinning fast and you know you're supposed to be happy but you aren't, what with loose parts flying everywhere and shrieking gears and that creepy ride operator leering every time you pass by. You just want it to stop so you can get off safely, but you can't.

RR: Since it won't stop, make art about it, right? Listen to the music and make some of your own.

JBY: UCF Percussion and Voci Dance got together to do just that with their performance at the Dr. Phillips Center of Steve Reich's 1971 classic, Drumming (April 14). The kinetic element of Reich's hypnotic phasing rhythms was explored in angular vernacular movement by Voci's dancers, while the arms of the percussionists created their own flashing patterns. The mesmerizing nature of that piece reflected my mental state for sure – still stunned by the events of 2016.

RR: While the white establishment fretted about the sky falling, Rollins professor Julian Chambliss taught me a new word in January: "Afrofantastic." He curated AfroFantastic: Black Imagination and Agency in the American Experience, an exploration of blackness both as reality and as construct. That show dovetailed neatly with Posing Beauty at Snap! Space, an exhibition of African-American conceptual art and portraiture. And William Cordova, a Miami-based, Peruvian-born artist, walked away with the Orlando Museum of Art's Florida Prize this year, on the strength of his installation honoring two Black Panthers killed by Chicago police, "The house that Frank Lloyd Wright built 4 fred hampton y mark clark (despues de Atahualpa)." Contemporary art is not an exclusive enterprise. 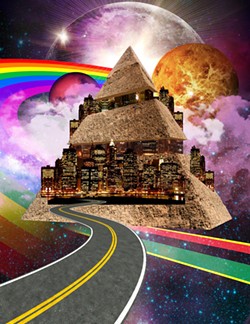 JBY: Or anyway, Orlando curators are making an effort at more inclusive representation.

RR: Meanwhile, Time as Landscape at the Cornell (Sept. 29-Dec. 31) was like a Stephen Hawking and Albert Einstein dunk tank: Time's elasticity and the hugeness of the universe became an escape pod from the carnival barker's harangue. This show knocked me out.

RR: The title pokes a little fun at our city's tourism fetish.

JBY: I didn't even think of that (duh). But the words you used to describe Time as Landscape – "an escape pod from the carnival barker's harangue" – that's what this show was to me. I mean, that's a pretty literal interpretation, but it's hard to avoid in the Year of Our Oh-Lord-What-Now 2017. As we all curled inward like snails or hermit crabs, figuratively protecting ourselves from the political madness or literally preparing for some apocalyptic environmental disaster, Andrea Zittel's "AZ Living Unit II," Kathleen Vance's "Traveling Landscape" or even Yin Xiuzhen's whole "Portable City" made a lot of sense to me.

JBY: Gallery at Avalon Island has been raising the bar on shows of local contemporary work for a couple of years – the current exhibition, Truths, Interpretations & Other Ways of Seeing (Dec. 21-Jan. 12, 2018) showcases some great young Orlando artists. But in 2017 Avalon got some help when the Henao Contemporary Center started showing edgier art, and then later on when Gallery Eola opened in Thornton Park. Gallery Eola is still too young to know whether it'll last, but for now it's a welcome return to the feel of those old A Place days.

RR: What's good about this horrid circus of a year is the show lights shine on everyone now, so if white men are surprised that it's not exclusively theirs anymore, it's due only to the clouds in their own eyes. If you can't get off the damned merry-go-round, hold hands with those sitting on the horses around you. We're all in it together.