Things to do in Orlando, Aug. 18-24: Fanboy Expo, Cuban Sandwich Festival, ‘Floating Beauty: Women in the Art of Ukiyo-e’

Our editors' selections of the best things to do this week.

Friday, Aug. 20-Sunday, Aug. 22
Fanboy Expo
With MegaCon now in the books despite some pretty heavy odds, we guess it's time for another fandom convention to go down in the City Beautiful. Fanboy Expo is a smaller affair than MegaCon — probably not a bad thing at this juncture of Florida's struggles with COVID — but it has its own distinct charms in terms of nostalgia-driven celebrity guests. So you've got Barry Bostwick (Rocky Horror), Catherine Bach (Daisy Duke, Dukes of Hazzard) and a Chips! cast reunion. Also appearing are wrestlers D-Von Dudley from the iconic ECW and father/son Florida royalty Bo Dallas and Mike Rotunda. Comic guests include Peter David and Tony Isabella. Please note that guests can cancel up to the last minute, because that's where we're at now. Also, MegaCon changed their policy to require masking, so this con may well do the same. Wyndham Orlando Resort International Drive, 8001 International Drive, fanboyexpo.com, $30-$199.

Saturday, Aug. 21
6th Annual Cuban Sandwich Festival
Get ready for a celebration of arguably one of the greatest sammies ever developed by humankind when the Cuban Sandwich Festival returns to Central Florida for a 6th year this weekend. Now, one could easily hold a Cuban Sandwich Festival and just pack it with vendors from around Central Florida purveying their ham-[roast pork or salami]-and-pickle wares, but the organizers of this fest are really leaning in to the creative possibilities of the day, with a schedule of events that includes: live music, dance performances, a noble attempt to construct the biggest Cuban sandwich ever, and an all-star panel of judges crowning a winner for Best Cuban Sandwich. The setting of Kissimmee's Lakefront Park is the perfect spot to take a stroll to fend off the irresistible urge to nap, post-feeding frenzy.
11 a.m., Kissimmee Lakefront Park, 101 Lakeshore Blvd., Kissimmee, cubansandwichfestival.com, free.

Saturday, Aug. 21
Medal Militia
It's a night of tributes to the titans of West Coast (plus one lone East Coaster) thrash metal headlined by Medal Militia, covering the songs of metal megastars and local educational philanthropists Metallica. Support will be from Chemical Warfare playing the role of Slayer (and we're betting they're going to nail it, as they're named after a song off Reign in Blood), Stay at Home Astronauts and Friends standing in for Megadeth, and Deserted Will repping the East Coast mosh anthems of Anthrax. Wondering if attendees are going to get in on the re-enactment too and turn their backs on bands who aren't their faves? 7 p.m., Soundbar, 37 W. Pine St., montgomerydrive.com, $12-$15.

Sunday, Aug. 22
Victor Ryan Robertson
As part of the Orlando Opera's more intimate "Summer Series" of warm-up shows, you can get to know some of the superstar singers who will be performing in Main Stage shows later this year. This installment features Metropolitan Opera and Broadway tenor Victor Ryan Robertson — who you'll see during the OO's season later this year performing in La Traviata (his Orlando Opera debut also!) — performing favorite pieces from both his different performing worlds with only piano accompaniment. There will be a informal Q&A segment as part of this show also, to really get to the heart of what makes Robertson tick.
2 p.m., University Club, 841 N. Park Ave., Winter Park, operaorlando.org, $45. 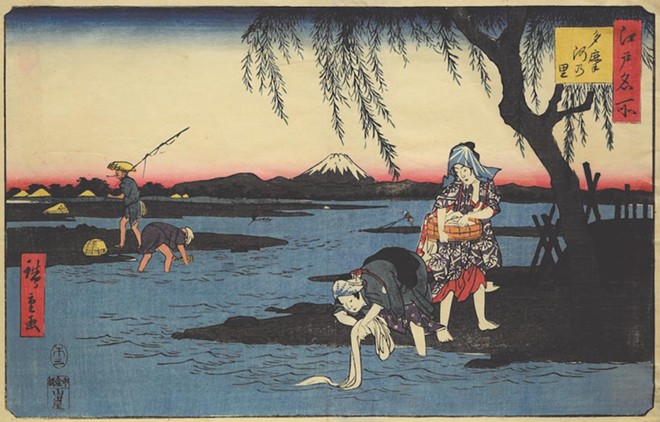 Through Aug. 29
Creatures in the Margins
As a visual complement to the Winter Park Public Library's "Tails & Tales" summer reading, this exhibit looks at representations of animals in art across genre and era. Cornell Fine Arts Museum, 1000 Holt Ave., Winter Park, rollins.edu/cfam, free.

Through Nov. 7
Ephemeral: American Impressionists and the Influence of Japan
A companion to the Floating Beauty exhibit, Ephemeral presents the work of a group of second-wave French expressionists who took considerable influence from Japanese woodblock prints. Mennello Museum of American Art, 900 E. Princeton St., mennellomuseum.org, $5.

Through Nov. 7
Floating Beauty: Women in the Art of Ukiyo-e
Depictions of women in art during the Edo period of Japan, consisting of over 50 woodblock prints. Mennello Museum of American Art, 900 E. Princeton St., mennellomuseum.org, $5.

Through Aug. 29
Multiple Voices/Multiple Stories
Dive into the history of portraiture in this exhibition of 30 works from the museum's permanent collection. Rollins Museum of Art, 1000 Holt Ave., Winter Park, rollins.edu/cfam, free.

Through Sept. 19
On Seeing Segovia
A travelogue by Maitland Art Center founder Jules André Smith of his 1921 travels in Spain in the form of paintings, drawings and a short story. Maitland Art Center, 231 W. Packwood Ave., Maitland, artandhistory.org, $6.