Things to do in Orlando, July 21-27: Shaq spins at the Vanguard; Medicare for All march; 3 new exhibits at Snap!

Orlando Weekly editors’ selections of the best stuff do to this week.

Friday, July 23
DJ Diesel (SHAQ!)
Shaquille O'Neal told us all he was "outstanding" (in song) as far back as 1993. And as he becomes more of a renaissance man every year, we can't disagree. EDM promoter Insomniac is bringing the Orlando Magic superstar, actor, rapper, political wonk (recently endorsed Aramis Ayala), restaurateur, commentator, hard-core wrestler and — of course — DJ back to Orlando to spin as his dancefloor alter ego Diesel. Put your hands in the air for a hometown hero. 9 p.m., The Vanguard, 578 N. Orange Ave., thevanguard.live, $19.99-$59.99.

Friday-Sunday, July 23-25
Re:Charge
Creative City Project and Timucua Arts Foundation are bringing back their innovative Re:Charge collaboration to give you a tuneful and mindful time-out from daily stressors. Re:Charge allows attendees to unplug from their day-to-day while orchestral musicians play ambient and atmospheric pieces. And because Creative City Project is a partner in this, the space — while intentionally minimal — will be augmented by subtle bits of aesthetic flair (prop clouds!) to create the necessary dreamlike effect. The ticket purchase buys you a reserved floor space, but you'll need to bring your own pillow, yoga mat or blanket. (Also happening July 30-Aug. 1.)
Various times, Colonial Promenade, 4644 E. Colonial Drive, creativecityproject.com, $35.

Saturday, July 24
Medicare for All March
A national coalition of progressive and activists groups hit the streets together this weekend to make their case for the urgent need to make Medicare for All — a single-payer healthcare system — a reality now, especially in the wake of a pandemic that exposed the inequities and injustices in our current healthcare system. Orlando marches will make stops at Sen. Marco Rubio's and Rep. Stephanie Murphy's offices downtown. Good on 'em. 10:30 a.m., 201 S. Orange Ave. (Sen. Rubio's office), m4m4all.org, free.

Sunday, July 25
Florida Cup
Two weekends' worth of all-star footie start on Sunday with a doubleheader at Camping World Stadium. This international soccer preseason tournament kicks off with semifinal matches pitting Arsenal FC against Italy's Inter, and then Everton FC against Colombia's Millonarios FC. No tie games in this one; penalty kicks decide a winner if a game ends in a dead heat. Stay hydrated.
6 p.m., Camping World Stadium,
1 Citrus Bowl Place, floridacup.com, $44-$500.

Sunday-Tuesday, July 25-27
[title of show]
Florida Theatrical Association stages this meta, one-act musical in a musical, a story about the creation of ... a musical. The Abbey, 100 S. Eola Drive, abbeyorlando.com, $15-$25. 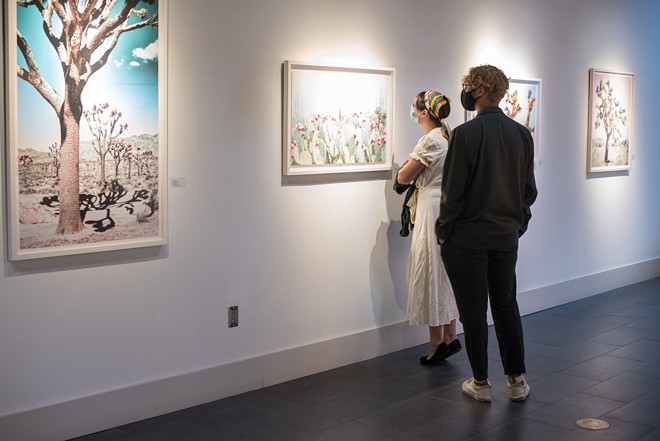 Through Sept. 19
On Seeing Segovia
A travelogue by Maitland Art Center founder Jules André Smith of his 1921 travels in Spain in the form of paintings, drawings and a short story. Maitland Art Center, 231 W. Packwood Ave., Maitland, artandhistory.org, $6.

Through Dec. 31
Preserving the Past and Looking Towards the Future
A photographic look at the history of Hannibal Square's African American community from 1900 to the present day. Hannibal Square Heritage Center, 642 W. New England Ave., Winter Park, hannibalsquareheritagecenter.org, free.