For the past 15 years, I've been covering the evolution of Orlando's haunt industry, at both Universal Orlando's acclaimed Halloween Horror Nights and the independent haunted attractions – from 2006's Nights of Terror to last year's Dark Horizon – that have dared challenge its dominance. This year, the coronavirus pandemic managed to do what no competitor had, derailing Universal's eagerly anticipated 30th HHN celebration. But the event's cancellation did little to dampen the enthusiasm of hard-core horror fans, who have lined up to snag exclusive merchandise from Universal Studios Florida's HHN Tribute store, organized #HHNatHOME events over social media and circulated rumors (recently confirmed!) that select haunted houses will open for daytime park guests starting Sept. 19.

That hunger for scares seems to finally leave an opening for Orlando's alternative Halloween offerings, and one innovative socially distanced attraction appears poised to take a bloody bite out of Universal's monstrous market share.

Scream n' Stream advertises itself as the area's first drive-through haunt, and according to co-creator and production manager Chris Louis, it may be your best bet to "bring as many of the Halloween traditions that we know and love safely into this godforsaken year."

If the loss of HHN30 hit you hard, you're not alone. Louis, who experienced his first Horror Nights at Universal Studios Hollywood in 1997 and has attended every year since, says he was "devastated."

More than merely a fan, Louis served as an HHN Orlando production manager from 2006 through 2009, "taking the creative vision and executing, bringing in costuming, bringing in makeup, bringing in scenic [and] audiovisual; bringing all those components together to execute the event every single night that it happens." 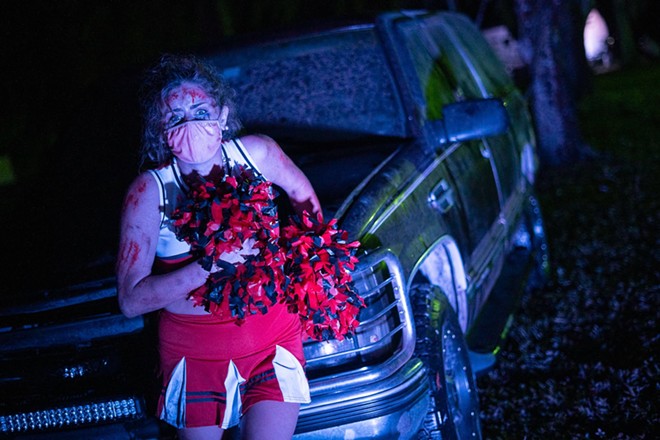 During the Great Recession, Louis left Universal for convention work at Disney (as well as in the Caribbean and Atlanta) before founding his own corporate audio-visual services company. But the love of Halloween never left him, and July's announcement of HHN30's cancellation proved the perfect opportunity to return to the haunt industry.

"Now that all those corporate events have gone away and we have all this equipment and know-how just idling, doing nothing, I thought, 'What could we do with our lighting and our sound, and our audio-visual industry connections to leverage in the fall?'," Louis explains. "My wife and I have been talking about doing a director Halloween event as far back as June; we just didn't know how all the pieces would come into place."

Once HHN30's cancellation was official, Louis leapt into action. "I spent two whole coffee-fueled days scanning Google Maps all over Central Florida, looking for a site that made sense," he says, before landing on a 32-acre abandoned RV park behind Boggy Creek Airboat Adventures in Kissimmee. "We've got these great roads that wind through these beautiful moss-ridden trees, and every 50 feet there's power and there's water, so we can plug in all of our audio and our lights, and we can even put in some water gags."

To fill those acres with frights, Louis enlisted talented former colleagues including scenic designers Kyle Ransbottom and Andrew Dugay, makeup artist Michael Burnett, and other Universal veterans. Together, they cooked up an original story line worthy of a '90s slasher flick – randy teens rile up a cannibal cult in an abandoned drive-in – and translated it into a 1.25-mile-long tableau featuring 10 scary show-scenes through which guests drive their own cars, at a maximum speed of 3 miles per hour.

Cars will be dispatched into the attraction every 60 seconds, with actor-controlled stoplights ensuring safe separation. "We don't want to have vehicles just one in front of the other with no gaps between them [because] it makes for a terrible show if brake lights are constantly in your face from the car in front of you," says Louis. "We wanted you to have just your headlights in dim mode ahead, nothing in the road in front of you, and this sort of feeling like you're out there all by yourself."

A main motivation behind producing Scream n' Stream was giving work to Orlando's unemployed creatives, not merely as volunteers but as paid employees. "We know a lot of folks are really passionate about Halloween, and we know a lot of folks are eager to get back to work," says Louis. While some other attractions utilize unpaid staff or promise talent a share of profits, Louis says he's committed to providing his cast and crew with paychecks (excepting a handful of scenic interns, who are receiving school credit and expenses). "I just can't imagine a world where we could get 30 people to come out here almost daily and sweat in the sun to build scenic and put on costumes and fake blood and perform, and not pay them," he says. "We want people to be invested in what they're doing with us. We certainly don't want our security or operations team members who are guiding vehicles to be volunteers because they need to have skin in the game. ... We need to have perfection in some areas, and that perfection has to translate to safety and security for everyone involved. So, for that we really need to have paid people, in my opinion."