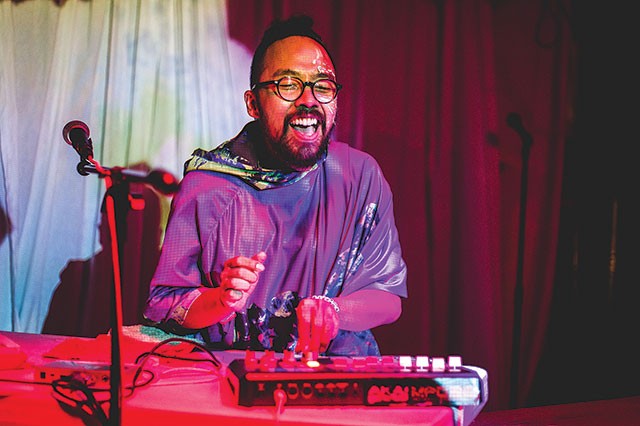 Next week’s boohoo/woohoo: TLU will be on break, but that’s because it’ll be our blockbusting Best of Orlando issue!

Body//Talk – a rising local events group on the DIY side of the party and beat scene – is beginning to do some prime-time underground stuff. Their latest jam (July 18, Peacock Room) brought L.A. producer Spazzkid, who’s been catching buzz with a signature blend of electronic pop, J-pop and beat music. On record, his music clicks and beams with positivity. On stage, his presence practically levitates. Once the music drops, his soul generates joy like a power plant, bursting beyond his own body and filling the room and every dancing body in it. Debate the amount of live performing he does if you want, but his live incandescence is undeniable.

More than just a live show with a dance-party pulse, Body//Talk’s events are an alternative to both the brostep musk of the mainstream EDM scene and the judgment-heavy, often stiff and sometimes aggressively pretentious underground rock scene. The communal vibe this night was cool but not too cool for school, which makes all the difference. They’re part of a new tide of the underground dance tradition where the spirit of the event is the event, and they’re making things happen.

40 winks: Photos from Spazzkid, Dromes and Adi Raja at the Peacock Room

Down the street (Will’s Pub), an O.G. Orlando events group, Phat-N-Jazzy, was also moving bodies with their fresh spin on an old form with a night focused on ’80s soul. The sweeping paradigm of the ’80s that brought game-changers like new wave and hip-hop tends to eclipse that decade’s soul and R&B in the musical discourse. DJ BMF’s response? To organize an entire event spotlighting that facet with his pacesetting mixes, vintage video projections and a whopping nine-piece band (Square Biz, an amalgam of the Gerry Williams Band and the Legendary JC’s). BMF’s one of the city’s best themed event-makers, and this one was on a deluxe scale. And it was an ass-shaker that recertified the funkier side of the ’80s.

Although its two members bring cred from notable Seattle groups like Mt. St. Helens Vietnam Band and Mad Rad, Iska Dhaaf is a new band making some early underground waves. Their protean sound – a mash of post-punk, indie rock, psych and surf – almost seems custom-built to hit tastemaker G spots. And though it’s dizzyingly diverse in a way that plays more like a mixtape than the unified work of a single band, it does show their ability across a spectrum.

After this early glimpse of their first national tour (July 14, Backbooth), it’s pretty clear that this is a band with real potential. For a duo, they cover extraordinary ground and deliver a lot of show with an arrangement where both members sing, the drummer also plays keys and the guitarist also plays organ. But the live heat and atmosphere of their performance went far in connecting their disparate aspects. And the remaining salient thread is a direct energy that rings with melodic precision and tasteful tones. Iska Dhaaf’s an unusual name, but might as well get used to it. You could be hearing it more in the future.

Orlando’s the Welzeins also played, emerging fresh from a revamp under guitarist-singer R.J. Nordstrom. They’re still a two-piece, just perhaps a more technical one with new drummer Matt Wassum. The main reason to like them is because they’re exciting and good. But the thing that makes them kick even more ass is that, when they first walk on stage, they look like the most unlikely rock stars possibly ever. And then they plug in and tear it up, finally revealing that they’re really one of the most rock & roll duos around. Their sound is garage-built, grunge-smeared and punk-spirited, and it can go from Jay Reatard’s velocity to Hendrix’s fire with raw power. The result is all crank, no wank.