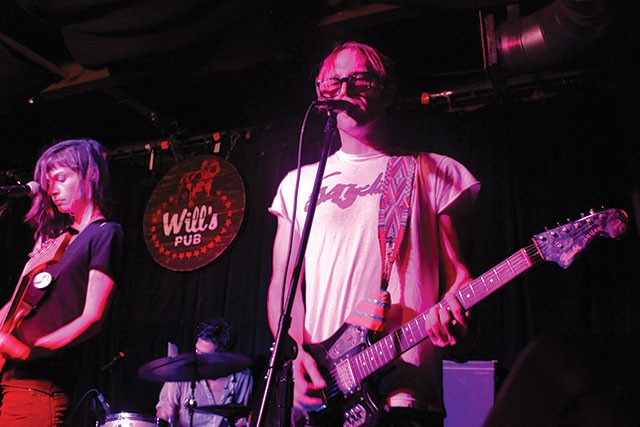 There are many good bands that get overlooked. It’s always been that way and it’s always gonna be, and it’s a frustration that all passionate music heads feel. Still, the current case of Broncho (Sept. 25, Will’s Pub) has me pulping my head against the wall. This Tulsa band remains criminally underrated almost everywhere. Here, however, I’ve been talking them up till I’m blue. Well, I’ll go a shade deeper and tell you, again, that you missed out on a really good show by a great band that has the stuff to pop at any time. But, despite scant attendance here, we’ve been fortunate enough to have them three times so far. So can we agree that – should we be blessed with a fourth – we’ll all show up and go total ape? Excellent. I knew I was right about you guys.

It’s been a good while since the almighty High on Fire has played Orlando, and the overflowing attendance at this recent show (Sept. 21, Will’s Pub) reflected that anticipation. Really, there are fewer nastier, more exhilarating stoner metal bands alive than these Oakland dudes, and they ravaged the room beautifully to validate every megaton of serious devotion heaped upon them. But even without High on Fire – and this is not a tenuous limb to go out on at all – this would’ve been a very impressive and diverse heavy bill just with the home team alone.

Because of High on Fire’s sick rig, everyone else played on the floor, which seemed completely natural for a punk band like Moat Cobra. A very effective and furious sonic combination, they’re a tough hardcore animal with dirty metal fangs. Once they dig in and focus their power a bit more, they’ll be a serious force.

Next up was Dzoavits, an Orlando band that’s really emerging in style and profile. For a super-technical metal band that’s built on individual complexity, they have an outstanding and welcome understanding of epic ensemble movement. Delivering black intensity and full-on density with sweeping post-metal grandeur, Dzoavits hits the kind of heavy-beautiful surges that’s making heroes out of new paradigm bands like Deafheaven. Their vision is coming more and more into focus, and it’s on pace with the kind of sonically massive metal that’s changing the game.

As the final kick before the headliner, local band Gut Ruckus got a little evil. By taking an inferno of Southern metal and punk and slowing its roll down just enough to really burn, they finally set off the heaving potential energy in this crowd and got the bodies flying. It’s as hot and horned of a primer as High on Fire could hope for.

Denver’s Tennis jumped onto the scene as one of the sharpest bands of the great Indie-Pop Oldies Revival Rush of 2011. Though the ’50s don’t really factor into their newer material, that sweet little trend held a particularly complementary perfection for their approach to pop music. However, this recent full-band performance (Sept. 22, the Social) gave assurance that their crystal-cut melodies haven’t gone anywhere.

Tennis hasn’t been here since they first emerged, and in that time, they’ve traded in the ’50s pop and absorbed a whole lot of the cosmopolitan soul and R&B of the ’80s. In fact, singer and heart of the band Alaina Moore sprouted an extraordinary amount of soft but real soul in her singing.

Even without the brightness and purity of oldies hooks, their songwriting remains concise, efficient and effective with a deadly hit/miss ratio. Despite the disposability that’s often – and mistakenly – associated with pop sweetness, these pop classicists have proven their craft with sustained precision.

There’s much to like about how Portland, Oregon, opener Pure Bathing Culture manages their space – a finespun convergence of dream pop and sophisti-pop – on the music spectrum. These Vetiver alums breeze on chillwave’s floating midnight frequencies, but thankfully step with much more conviction, purpose and golden West Coast rays to give everything some presence and pulse. You know, like a real pop band.

Their Orlando debut was distilled and lovely. At once clear and supple, the sonic simplicity behind Pure Bathing Culture is a thing not of rudiments but of judiciousness and tasteful economy.

My better self: Photos from Tennis and Pure Bathing Culture at the Social