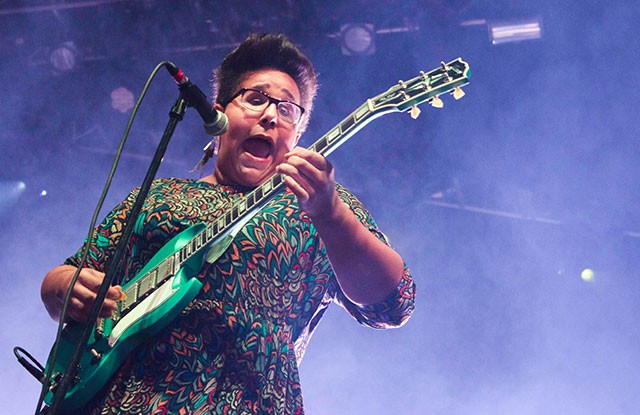 So Orlando camp-billy act the Bloody Jug Band made it onto the video for the new Pitbull song featuring Ke$ha (“Timber”). I don’t personally think any sort of affiliation with Ke$ha is at all something to trumpet, but congratulations to them on some wide exposure.

Also, an update on ailing local musician Steve Garron: He just announced that he was accepted onto the kidney transplant list. Great news and continued luck, Steve.

Danny Brown (Dec. 4, Plaza Live) is one of the more colorful and now characters in the rap game. By breaking with much of longstanding hip-hop tradition, the Detroit MC has blazed up (pot pun only partly unintended) the underground with his gully hipster style.

But, having seen lots of terrible rap shows, I always go in wondering and skeptical. Would he just be another rapper who’s best savored at an arm’s length, through the mystique of the studio or the Internet, rather than live? Turns out, Brown’s legit. But on top of those sturdy fundamentals is the renegade freak vibe that makes him beam with raw freshness and originality. It’s what gives him hero status. Although solid as an MC, he’s not game changing, but the cat moves culture because he’s got aesthetic. His nasally, manic raps pack plenty of the usual dirt and grit from the genre’s edgier sides, but little of the stereotypical macho mien. Adopting almost the opposite of the rockstar stance, Brown flips the ideas and appeal of the art form. And that’s worth a lot of credit.

South Florida opener Eric Biddines was a complete and happy surprise. He’s a high-quality, versatile MC with an alternative step, crisp Southern sound and, apparently, a major coffee fetish. Instead of the typical rap gasconade, he locks it down with left-field personality, cool ease and in-the-pocket execution, making him a refreshing intersection of dope and interesting.

Click to see a slideshow from Alabama Shakes' show at Hard Rock Live!

The slingshot notice that Alabama Shakes have garnered from being recent Grammy darlings has taken them on a notably above-ground track. The brain of the hard-line cynic-critic will point to the convenience of their revivalist angle, and it’s a valid point. But listen with the heart of a pure music fan and it’s hard to deny the sheer fulfillment of their soul. They’re easy to grasp but no less penetrating. This isn’t your flavor-of-the-week pop candy here. Moreover, like the Black Keys, the Shakes rock tradition with just enough new shine, kick and power to matter resoundingly today. It’s only rock & roll, but theirs hits the bull’s-eye like few do. And quality this good in the mainstream is no small victory.

All of this was fully validated in person at their Orlando debut (Dec. 3, Hard Rock Live). This is a total live band. And frontwoman Brittany Howard, she is it: The complete package, the real Mac, a modern classic juggernaut. Even if she was just a vocalist, she’d be a stunner. Her Joplin-meets-Tina voice can flat-out knock you down. But to play guitar, too? Goddamn.

Yes, their vintage bent comes with a lot of automatic advantage. But really, such force, precision and pure, quivering life throws academic arguments out the window. Beyond trend, beyond fashion, this is the kind of band that brings people deep, true and transcendental joy. It’s why both my parents (with whom I went to the show) and I could dig ’em equally and genuinely.

Brooklyn opener Clear Plastic Masks is also informed by classic rock and soul grit. They’re totally solid and competent but less remarkable, and perfect proof that it’s not enough to just mimic the style. You gotta have the songs to be something. You could hit all the marks in the playbook but without that extra something, that pop, that click, you’re somewhere in the middle. That’s right, nowhere. And that’s exactly where Alabama Shakes triumph.

As worthy of a Cinderella story as there is in today’s pop music landscape, the Shakes are a band that, by being in the popular consciousness, makes us a little better. And more than a few times, they raised the hair on my arms. Now that’s something impossible to deny. Once you’re in the same room with them, all questions evaporate.