This Little Underground: Harrypalooza pops off 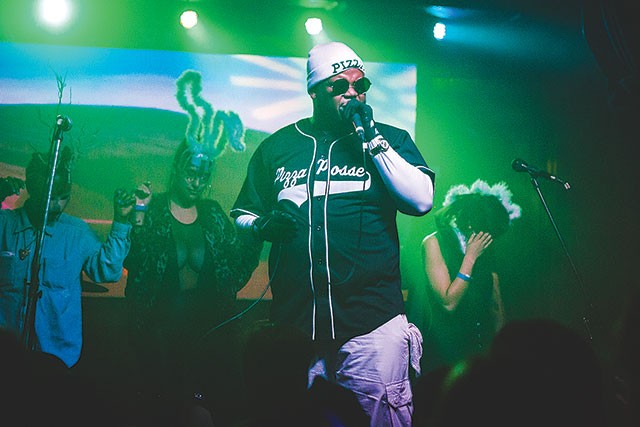 In January, Orlando Music News reported that down-to-earth Ivanhoe Village bar the Caboose had expanded and built a stage. So far, that development hasn’t sparked much buzz. Still, I wanted to see it firsthand, so I popped in on the free Rawcore Hip-Hop showcase hosted by Damez and RecordMonster (April 19). The sound there’s not great but it’s passable for a place that’s bar first and live space second. That said, the layout’s much more conducive to events than most bars. And though it’s not yet known as a live spot to watch, I saw people here specifically for the music and a guy in a luchador mask handed me a flyer for an upcoming concert at the Peacock Room. For me, that’s enough of a show vibe to warrant keeping an eye out for more live action here. The Caboose has the setup. With the right involvement and support, it could blossom into a viable venue for small, chill shows in a burgeoning neighborhood.

Apparently, there have been three editions of Harrypalooza prior to the latest (April 17, Backbooth). But this one interestingly, humorously materialized from an especially contentious thread on the Orlando Musicians Guild Facebook group page. Befitting its unusual birth, the centerpiece of this live showcase was the curious concept of a joint performance between Mr. 3 and Saskatchewan.

Saskatchewan is a local indie-pop band with a national profile that I’ve covered extensively. Orlando rapper Mr. 3, however, has not been mentioned here. But that’s going to change right now forever, particularly after this event. Besides organizing Harrypalooza (named after his non-stage self), the charismatic Mr. 3 is probably the sharpest comedic hip-hop voice seen around here in ages. Cleverly situated between hipster and G, his raps are literate, funny and fresh. Anyone who calls himself the “Black Liz Lemon” and drops Dennis Kucinich in a rhyme is on one interesting cloud.

To prime the stage for the special headlining extravaganza, Mr. 3 performed his original material, which is both recommended and free (pizzaposse.bandcamp.com). Then he brought up Saskatchewan and together they launched into a cork-popping set of millennial rap covers. And unless you were up in that packed house, my words can never fully capture how great it was to see the, no offense, very white Saskatchewan rock “Back That Azz Up” on real instruments. The very idea is ruh-dick. But it’s also genius. And everyone – from the audience to the performers – was loving the shit out of it. It’s got all the makings of an evergreen template for future collaborations that could inject some major party spirit into the indie scene.

In fact, the difference between this and your typical show is that it was conducted like a garage dance party, complete with classic club atmosphere, pumping with lasers and enough fog to set off the fire alarm – multiple times. There were even live visuals to make up the live action gap in a show featuring mostly producer types (Grant, VSN QST, Native Feel). The cumulative fever was so epidemic that I caught James Dechert – my photographer that night and one of the most focused and dutiful documentarians in our stable – getting down on the dance floor with his camera swinging (Busted!). Look out. Now that Harrypalooza has officially entered the primetime, this fire could spread.

Do not buy Bad Veins (April 19, Will’s Pub) shots. Not unless you want to see a musical band do spoken word – which, with the exception of perhaps Valient Thorr, you never want. But that’s essentially what happened after a fan-girl delivered the Cincinnati duo a round of those pickleback shots that have been lighting up Will’s lately. What started out as a generous, well-meaning gesture to crank up the party had the reverse effect of supplanting the music with a flood of uncontrolled onstage yap. Less talk, more rock, dudes.

Prior to that, however, they were putting on a show with their big-rocking indie-pop sound, bounding enthusiasm and spectacle-on-a-budget sensibility (elaborate DIY light and stage set). And then whiskey happened. Welcome to the new full-liquor reality of Will’s Pub. Lord help us.