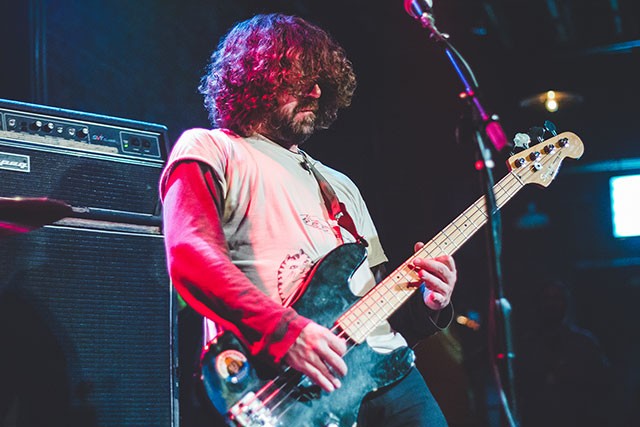 Without question, Ralphfest was the story of the week. This memorial music festival remains the best effort to turn a profound tragedy into a beacon of spirit and benefit that our music community has ever produced. And this third year featured great national talent (Sebadoh, Octagrape) and improved involvement of younger bands, an essential thing for this worthy annual’s continuance and vitality.

Although one of the weekend’s quietest, least flashy performances, Terri Binion (Feb. 7, Will’s Pub) was one of the brightest of the opening night’s highlights. She doesn’t play out nearly as much as she should, but this arresting set was a reminder that there are few voices in the city as graceful or perfect as hers. No attitude, bluster or bullshit – just pure artistry. And it’s why she’s still the local Americana gold standard.

The second night featured special moments like the Attack bringing out Tim “Johnny Vegas” Burton (Mighty Mighty Bosstones) and a local star-studded Guided By Voices cover set. Because I missed the momentous November one, the big-rocking Precious reunion (Feb. 8, the Social) was particularly notable.

However, the crown goes again to local lounge star Lorna Lambey (the Beacham). She took top honors at last year’s Ralphfest because – backed by two players (Los Diggaz), which is twice what we’re used to – she was able to really get out front and shine. But this year was just blinding because the wattage of her radiance was charged by a 20-piece big band. What this grand arrangement cedes in homespun charm – the hallmark of her legendary shows with the much-missed Mark Wayne – it compensates in spectacle and quality. It underscores how truly dazzling she is as an individual performer, an aspect that – I dare say only after witnessing it unchained – was merely hinted at in those cozy Red Fox Lounge shows.

Even better, Lambey’s performance was also a showcase for pianist Joseph Baker, last year’s recipient of the Ralph Ameduri Jr. Music Scholarship, which is funded by this very festival. Holding down the keys by himself among a wall of seasoned horns, the kid’s clearly a worthy recipient. And the aggregate result? A total sensation.

Skinny Puppy (Feb. 5, the Beacham) arrived fresh alongside the news that their music had allegedly been used to torture and stun prisoners at Gitmo. Surely, this revelation wasn’t gonna go by unanswered by such militant liberals who’ve spent practically their whole career literally shouting their stance against animal torture with horror-film graphicness. Oh, hell no. So they devised the idea to fire back with … an invoice. That’s right, bucko, to the U.S. government for “musical services.” Oh, wait, according to an interview with Phoenix New Times, they didn’t end up sending it. Instead, they acknowledged it with the title of their latest album: Weapon. In yo’ face, Uncle Sam. Canadians don’t play.

A rather slim percentage of industrial music can be considered classic. Chill, rivetheads, I’m speaking as a former believer. You’re talking to a guy who misspent many a classroom hour recreating the cover of Too Dark Park in his notebook. And I don’t mind telling you it was a ballpoint masterpiece either. Go spend some time with that album; it’ll kick your ass.

But Skinny Puppy commanded a very respectable pull considering the point of their career and the state of industrial music in general. So what allows them to continue like this, despite the surrounding trend? The depth of their original mark and some gut, that’s what.

Even without gallons of fake blood this time, the stage show still featured plenty of old-fashioned showmanship with props, costumes and massive video projections. But the band sounded good, thick and, most importantly, alive. That’s saying a lot for a set that featured more post-prime material than it probably should have. (Still, a legacy band needs to give requisite time to their hits and classics.)

For the encore – of which there were two – singer Nivek Ogre came out sans costume and makeup. And unlike Kiss without face paint, he looked fresh and fit like he’d just come from some Trent Reznor boot camp. He and Douglas McCarthy must work out together or something. But it’s a physical embodiment of the artistic feat that Skinny Puppy has pulled off.