This Little Underground: Live music at the Smiling Bison

Plus, live reviews of the Chris Charles Quartet, Flesh Wounds, Ex-Cult, Back Pages 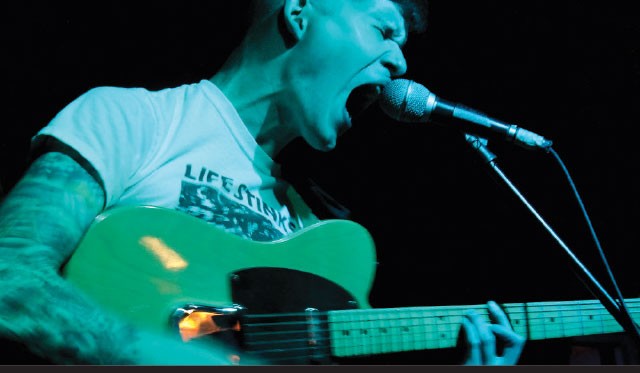 Last week, I wrote about how Rocco’s Italian Grille – considering all the moves they’ve made recently, like extending their bar hours and bringing aboard entertainers and bar staff from the Red Fox Lounge – is nicely positioned to become a supper club. Well, with music offerings like what I just saw at Jazz Tuesdays with the Chris Charles Quartet (Nov. 11), it looks like the Smiling Bison is already there.

I have great memories of nights at the old Redlight Redlight location on Bennett Road, digging into acts like the Cook Trio. Even though it’s now home to noted restaurant the Smiling Bison, the space has continued to host live music on the reg several times a week.

Nowadays, live music in restaurants, if you can find it, is more often just token background soundtrack for whatever else you’re doing (eating, drinking, conversing). What the Bison offers, however, is a show. If you don’t want music to be at the center of your experience, you should really sit at one of the tables on the other side of the restaurant. But for entertainment seekers, this should be music to your ears.

The featured quartet on the Bison’s most regular night is an Outer Toons-affiliated jazz group, and they really swung. With legit players on sax, piano, upright bass and drums, this foursome alone could’ve carried the night with cool ease. But you actually get much more bang, because in the time I was there at least seven guests had taken the stage, and it looked like there were more on deck. Throughout the night, a steady flow of players packing instruments kept rolling in. It’s a fluid, open format that translates into more experience for spectators. Moreover, perhaps because it was populated heavily with musicians, the audience experience was a tuned-in, jazz-minded one where even solos are actively applauded. It all sounds a lot like a music club vibe, doesn’t it? Well, that’s exactly what I felt, and it was pretty great. I arrived around 9 p.m., so I witnessed the changeover from restaurant to listening room. It was an impressively smooth and natural shift, ultimately transforming the restaurant into something that’s as close to a real jazz club as I’ve seen in this town in many years.

But their music offerings aren’t just limited to jazz. The marquee rotates but is known to include notable happenings like a monthly songwriters’ series headed by Beth McKee and appearances by other local respectables, like hard-soul star Eugene Snowden and the always righteous Gerry Williams Band. But jazz heads unite, because Tuesdays already have a true rhythm and it’s tuned to your channel.

For many – me included – cool weather just calls for jazz. With the temperatures easing down a bit (yes, lows in the 50s qualify as “cool” for us around here), the idea of live jazz becomes an imperative again, and the Chris Charles Quartet’s weekly stand is it.

I just had my first encounter with local garage-punk band Back Pages (Nov. 12, Will’s Pub) and it was fast, dirty and insistent. They’re young dudes and their playing is still rough, but they pack some guts and promise.

Where exactly they – or anyone serious, for that matter – should set their sights was immediately answered by thrilling North Carolina trio Flesh Wounds. On record, their sound is some great rock & roll that’s cut with punk ethos. But in person, those punk veins are full-on bulging during an all-out live attack from frontman Montgomery Morris, who commanded the stage with swashbuckling animalism. Taken together, it’s big rock & roll thunder pushed to the scowling extreme.

Memphis punk upstarts Ex-Cult have been busy not just at work but racking up loads of scene cred with their association with garage-punk locomotive Ty Segall. The core of their sound is a sneer that’s basic, primal and powerful. All around, though, it’s sonically besieged by a smothering psych monsoon. The result is a vortex of dark-trip haze, penetrating pulse and ill will. Even with all those expansive dynamics swirling around, the net effect is an impressively focused and funneled sound. Live, it was a force.

Shattered circle: Photos from Ex-Cult, Back Pages and Flesh Wounds at Will’s Pub